The 2010 Fifa World Cup™ offers the perfect opportunity for South Africans to showcase their talent, while tapping the business potential of football’s showpiece global event.

One South African is doing just this, with a unique brand of puppetry which is set to wow the crowds with more than just the action on the pitch.

Daniel Popper, a young artist working and teaching in Cape Town, began manufacturing his massive artworks after graduating from the University of Cape Town’s Michaelis School of Fine Art in 2006.

Over the space of two years, working through trial and error, and a few hints from the internet, he slowly began a process that would lead to the enormous puppets he has now perfected.

“When I made my first puppet it was for fun, an experiment,” says Popper. “Since then I’ve taken various puppets to festivals and gatherings, where people kept saying how lots of these would look amazing together on a field, at an event, so I came up with this idea to make giant soccer players for the World Cup.”

Popper’s massive puppets stand at over five metres tall – almost big enough to look through a second floor window. The necessarily lightweight frame is manufactured out of a number of materials, ranging from fabric and bamboo to aluminium and foam.

Each of these giant structures is operated by a single puppeteer who is strapped into a harness below the puppet.

Included in the puppets’ intricate design is a lighting system, which allows the giant art forms to shine at night, changing their appearance and making their incredible presence even more commanding.

Popper believes the puppets offer something special to the audience watching them. “The attraction is that they are giant; it is always eye catching to see something this big,” he says.

“While a lot of entertainment today is static, these puppets move, they dance, and because of this they really capture people’s imagination. They take people out of their environment for a moment, and they start to relax because the puppet reminds them that they are out to have fun.”

Since last year, Popper’s aspirations for the tournament have grown, and he has been encouraged by the response to his prototypes.

“It would be amazing if they could be all over the place,” he said, excited about an expected World Cup influx of around 450 000 visitors, many of whom will get to witness his puppets in action on the streets of Cape Town and other cities around South Africa.

Now running his own business, Popper credits the arrival of the 2010 World Cup for playing a big part in inspiring him to become an entrepreneur.

“I think that there are opportunities for everybody, but for creative people especially. For a lot of the artists in the country, now is a chance for them to put their work out there for the rest of the world to see. This is history, and we as artists can record that.”

Popper’s advice for other people looking to start up their own businesses ahead of the tournament next year? “Just go for it, don’t be afraid to do it. It is tough, but the opportunities are there; just be properly prepared.”

The giant football puppets will be performing for the first time at the friendly match between South Africa and Japan at the newly completed World Cup stadium, Nelson Mandela Bay, in Port Elizabeth on Saturday 14 November. 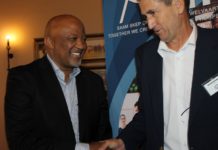