The 2010 Fifa World Cup will see 32 national football teams competing for the biggest prize in sport. Find out more about the groups, the teams, the stars to watch out for, and the countries’ World Cup records with SAinfo’s World Cup groups guide.

The only group containing two former Fifa World Cup winners: France (1998) and Uruguay (1930 and 1950). Hosts South Africa will have their work cut out for them!
Go to Group A

Argentina, Greece and Nigeria, three of the four members of 2010 Group B, all featured in the same group at the 1994 Fifa World Cup. On that occasion, Nigeria topped the group, while neither Argentina nor Greece made it through to the round of 16, both losing out to Bulgaria.
Go to Group B

As of February 2010, North American fans had bought more tickets for the 2010 Fifa World Cup than supporters from any other country excepting hosts South Africa. English fans are third on the list of ticket sales. Full houses assured for this group!
Go to Group C

Along with Group G, a “group of death”. Germany will be favourites, but recall that Australia almost upset Italy at Germany 2006. Ghana also reached the last 16 in 2006, while Serbia could be the dark horse at South Africa 2010.
Go to Group D

The style of play of the teams in Group E is probably more distinct than in any other 2010 World Cup group. The Netherlands: technically superb. Denmark: tenacious and physical. Japan: speedy and industrious. Cameroon: physical, but individually talented.
Go to Group E

Defending world champions Italy not only have four World Cup titles to their name, they also have as many World Cup appearances as the other three Group F teams combined – 16.
Go to Group F

Brazil-Portugal will be one of the most eagerly awaited of all group matches: it features the only group clash of teams ranked among the top five in the world and, while Brazil traditionally boasts flair, Portugal has at least one player with the ability to trump any Brazilian.
Go to Group G

Spanish-speaking football fans might want to follow Group H. Apart from the obvious attraction of the world’s top-ranked team, it contains two other Spanish speaking sides: Honduras and Chile.
Go to Group H 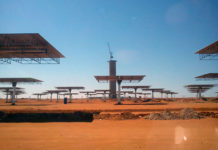 Khi Solar One: renewable energy for the ages