Hundreds of Dutch football fans braved the chilly Pretoria weather on Monday, gathering at the Centurion Fan Park to watch the Netherlands take on Denmark in a Fifa World Cup Group E clash.

Dancing to music to ward off the cold, the group of football lovers proclaimed their love for their home teams.

Dutch fan Marc Komen, who is part of the “Oranjes” camp at Fountains Valley, said: “It is the first time that the World Cup has been held on the African continent, and we knew that it was going to be special here.

“We knew that there would be a lot of dancing and singing and all these horns making a terrible noise. I think we all had a pretty good feeling about how it would be.”

The Oranjes make up what is widely considered to be one of football’s most loyal and fervent fan bases. Their distinctive, “in-your-face” orange kit hollers their presence and ardour in any location.

After watching Monday’s game, Komen said the Oranjes’ supporters would pack up and drive in a convoy of about 180 cars to Durban for the Netherlands game against Japan, and then on to Cape Town for their game against Cameroon.

“We are just here to experience Africa and support our team,” shouted another, who introduced herself as Amanda.

Fan Jon Dahl, who came all the way from the United Kingdom, where he works, told BuaNews that his stay in the country has been wonderful so far.

Dahl and two of his two friends have been touring southern Africa since May. “We’ve seen Botswana, Zimbabwe and Swaziland as well.”

But the biggest surprise for Dahl was South Africa’s diverse culture. “I wasn’t expecting that, and the people are really friendly,'” he said, adding that he felt safe.

“I love everything about this place,” he proclaimed.

“If you look at the team from the back to the front, we have really good players,” he said.

“It’s going to be a great day, I could not stay at home, I wanted to come here to experience the atmosphere and celebrate,” said Danish fan Patrick Joris, who came with family to watch the game.

Tuesday’s showdown at Soccer City produced a goalless first half at Soccer City, but the Dutch took the lead against the Danes on an own goal in the first minute of the second half.

They wrapped up a 2-0 victory five minutes from time when Dirk Kuyt followed up on a shot by Eljero Elia that hit the post and side-footed the rebound into an empty net.

Japan beat Cameroon 1-0 in Monday’s other Group E clash on a goal by Keisuke Honda.

The victory left the Blue Samurai in second place behind the Netherlands on goal difference after the opening round of group matches. 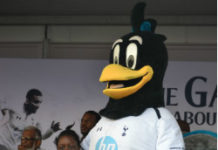