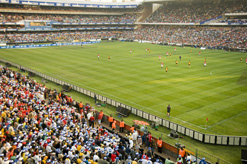 Football – or soccer, as many of us call it – is the most widely played sport in South Africa, with its traditional support base in the black community. For many South Africans, the country’s proudest sporting moment came when we won the African Cup of Nations on home turf in 1996.

Football is intensely followed, and the quality of the local game keeps improving – as demonstrated by the increasing number of South African players-in-exile among the glamorous European clubs.

Local teams, organised in a national league plus a plethora of knock-out cups, are followed with passion by paint-daubed, costumed, whistling and cheering fans. Mercifully, the country has been spared the spectre of football hooliganism.

One of the first gifts that democracy brought South Africa was its first truly representative national football team.

In 1992, two years before the country’s first democratic election, the united South African team came into being, playing Cameroon in its first match in Durban on 9 July. It was a triumphant occasion for the side that came to be known as Bafana Bafana – “The Boys” – as they edged the West African powerhouse by a goal to nil.

However, the win concealed the negative effect that apartheid-enforced isolation had had on local football. This lack of international experience showed as South Africa lost four matches in a row – to Cameroon, Zambia, Nigeria and Zambia – in failing to qualify for the 1994 African Nations Cup.

When South Africa hosted the 1996 African Nations Cup, however, South Africa proved they belonged in the finals by defeating Tunisia 2-0 in the final. It was during the team’s run to the title that its nickname, “Bafana Bafana”, became known around the world.

South Africa’s senior women’s team, Banyana Banyana – “The Girls” – have traditionally been the strongest team in southern Africa and one of the best in Africa.

There is, however, one hurdle that Banyana have yet to overcome: Nigeria. Had it not been for the West African powerhouse, South Africa’s women would have laid claim to the number one ranking in Africa a number of times in recent years.

Banyana Banyana were crowned Cosafa (Confederation of Southern African Football Associations) champions in 2002 and 2006. In continental competition, the team finished runner-up to Nigeria at the CAF African Women’s Championship in 2000, and second at the All Africa Games in 2003 and 2007.

South Africa’s favourite football club never seems to play an away match. “The Amakhozi” often draw more supporters at away games than their opposition.

Founded in 1970 by Kaizer Motaung – who made his name in the United States when the American league was drawing such superstars as Pele, Johan Cruyff and Franz Beckenbauer – Kaizer Chiefs are one of South Africa’s most successful teams.

Twice the winners of South Africa’s Premier Football League since its launch in 1997, the Soweto, Johannesburg-based team secured their first African title in 2002 when they won the Cup Winners Cup – renamed after Nelson Mandela – by defeating Inter Luanda of Angola in the final.

Formed in 1937, Orlando Pirates has a support base extending across the country’s borders.

Two-time winners of SA’s Premier Football League since its launch in 1997, “The Buccaneers” are the only South African team so far to have won Africa’s premier club competition, the Champions League, a feat they achieved in 1995.

Like Kaizer Chiefs, Orlando Pirates – who are also based in Soweto, Johannesburg – are seldom disadvantaged when they play away from home, with fanatical supporters spread throughout South Africa.

The fierce traditional rivalry between Pirates and Chiefs makes for one of the biggest derby matches in the world. In November 2007, on the day preceding the 2010 Fifa World Cup™ draw in Durban, the Chiefs-Pirates derby was broadcast throughout Africa and 43 European countries, a first for South African football.

While Chiefs and Pirates have long battled for the title of South Africa’s most popular club, other outfits have emerged to challenge for the position, among them two Tshwane/Pretoria-based clubs: Mamelodi Sundowns and SuperSport United.

Backed by billionaire mining magnate Patrice Motsepe, Mamelodi Sundowns have the finances to ensure a squad with depth and quality. The club is often compared to England’s Chelsea, which rose to prominence partly through the backing of Russian billionaire Roman Abramovich.

“The Brazilians” have been the most successful team since the formation of the Premier Football League in 1997, winning the title on five occasions, most recently in 2007.

Since then, however, they have had to surrender the title to another “youngster” among South African football clubs. SuperSport United was formed in 1994, when pay-television company M-Net bought Pretoria City and renamed the club after its popular sports channel.

In recent years, SuperSport United has reaped the benefits of all-round consistency under coach Gavin Hunt, and of having one of the most successful youth academies in the country.

The Premier Football League (PSL) has helped raise the standard of club football in South Africa, providing the sport with better media coverage and much-improved revenue through strong sponsorship deals. It has also provided a platform for local players to make their mark and catch the eye of overseas clubs.

In June 2007, the PSL pulled off an astounding coup when it signed a R1.6-billion broadcast deal with SuperSport International.

In August 2007, corporate heavyweights South African Breweries (SAB) and Absa Bank announced a joint sponsorship of more than R500-million over the next five years for South African football. SAB is behind Bafana Bafana, while Absa sponsors the PSL’s Premier Division.

In February 2008, Nedbank announced that it would be putting up R20-million in prize money for the Nedbank Cup knockout competition as part of a five-year, R400-million sponsorship of the local game.

And in August 2008, cellular giant MTN committed the same amount – R400-million over five years – to the local game, while taking over the title sponsorship of the Top 8 knockout tournament.

A number of knockout competitions are played alongside the league fixtures in South African football.

The MTN 8 – formerly the Top 8 and Supa 8 – is contested at the beginning of each Premier Football League season by the top eight finishers of the previous season.

Now known as the MTN 8 Knockout, after cellular operator MTN took over the title sponsorship, the tournament boasts a R8-million winner-takes-all prize – while guaranteeing each team R800 000 simply for participating.

The Telkom Knockout competition, which features all 16 Premier Football League teams on a knockout basis, is African football’s second most lucrative domestic competition after the Nedbank Cup.

The competition was first held in 1992 and has existed under a number of different names, including the Coca-Cola Cup and the Rothmans Cup.

Below the Premier Football League, South African football’s First Division is divided into two – the Inland Stream and the Coastal Stream – with each stream made up of eight clubs.

At the end of each season, the winners of the two streams meet in a final, with a place in the Premier Football League at stake (replacing the team that finished last in the PSL). The second-placed team, however, still has a shot at making it into the PSL.

That club takes on the two second-placed finishers from the First Division, as well as the team that finished second-last in the PSL, in a mini-tournament, with the winner earning a place in the top league.