Fan Fests in Germany during the 2006 Fifa
World Cup attracted more visitors than the
Oktoberfest – some 9-million at the Berlin
fest alone.
(Image: Wikimedia)

Open-air big-screen gatherings to watch Fifa World Cup matches were first held in Korea during the 2002 tournament, and then made part of the official Fifa programme during the 2006 World Cup, held in Germany.

There they attracted more than 18-million people to 12 different events – one, held at the Brandenburg Gate in Berlin, drew a whopping 9-million fans to a single event. Fan Fests have become so overwhelming popular that in 2010 South Africa is set to throw massive football parties of its own.

The 2010 Fifa World Cup will see Fan Fests held in each of the nine host cities; Johannesburg, with two stadiums, will host two festivals. Fans who can’t make it to the stadium will be able to enjoy the excitement and atmosphere of World Cup football and watch all matches live on world-class giant screens in a safe and secure environment – for free.

There will be live music and entertainment as well as lots of good South African food and drink on sale, and fans will get the chance to learn the Diski Dance, the official World Cup dance which combines funky South African moves with popular football tricks.

The Fan Fest venues will be open on all match-playing days. And remember, entrance is free.

To get the most out of the World Cup vibe, here are the details of South Africa’s 2010 Fan Fests.

The Soweto Fifa Fan Fest is located in the heart of the bustling township of Rockville in Soweto, at the series of fields which make up Elkah Stadium. The venue is conveniently located next to the Thokoza Park station of Johannesburg’s new bus rapid transit system. Up to 40 000 people can be hosted at Elkah Stadium.

On the northern side of Johannesburg, close to both Alexandra township and the Sandton central business district, lies InnesFree Park, the venue for the Sandton Fifa Fan Fest. This park, with its rolling grass and water features, will provide a picturesque location for the event, with the Sandton skyline as a backdrop.

The Grand Parade will be the venue for the 2010 World Cup Fifa Fan Fest in Cape Town. Situated at the heart of the city, the square is surrounded by the Castle of Good Hope (South Africa’s oldest building), the Cape Town City Hall and the newly renovated Cape Town Station. The square holds a lot of historical significance in South Africa having shot to international acclaim when struggle icon, Nelson Mandela, made his famous first public address here after his release from prison in February 1990.

Tshwane/Pretoria is the administrative capital of South Africa. The city hosts the second-largest number of embassies in the world, as well as various foreign missions, trade delegations, consulates and international aid organisations.

The venue for the Fifa Fan Fest in Tshwane/Pretoria will be the Centurion Cricket Ground, located just outside the city’s central business district. The Cricket Ground has been the host to many large sporting events in the past, and will provide numerous onsite facilities for visiting fans. With both seating and standing options, viewing the games on the 50sqm screen couldn’t be more comfortable, with entertainment between games that will bring you to your feet.

This Fifa Fan Fest is the only one in South Africa situated on the beach. Can you think of a better way to spend a sunny day than watching great football and catching some waves in the warm Indian Ocean at half time?

After the football, you can walk to your hotel or on to any one of the many restaurants and pubs along the beachfront promenade. Durban Stadium is also within walking distance from the Fifa Fan Fest.

The Bloemfontein Fifa Fan Fest will be located at the Mangaung Outdoor Sports Centre in the township of Rocklands, Bloemfontein, 15 minutes from the city centre.

The venue of numerous events in the past, the area around the Mangaung Outdoor Sports Centre has undergone a significant upgrade in preparation for the 2010 events.

Within the venue, five-a-side football pitches will be available, to ensure there will not be a shortage of activity. You will be able to get to and from the Fifa Fan Fest on a dedicated shuttle that runs from the centre of town, or will be able to drive there yourself and park in a secure area close to the venue.

Located just outside the Nelspruit city centre, Bergvlam High School will be the venue for the Fifa Fan Fest during the 2010 World Cup™. Known as the location of the annual Innibos Arts Festival, an event which attracts over 100 000 festival goers over a three-day period, Bergvlam High School is a well-known large events arena. Following a significant upgrade of its facilities, the venue will provide a fantastic platform for the Fifa Fan Fest. Ample parking spaces will be available within walking distance of the event, with the city providing alternative transport arrangements to ensure that you are able to move between the stadium and the Fifa Fan Fest with ease.

The Port Elizabeth Fifa Fan Fest based at St Georges Park – the oldest park in the city and the site of the second-oldest cricket stadium in the country.

In the heart of the city, the stadium is a natural venue for picnics and has a host of facilities including an open air theatre, public swimming baths and the Nelson Mandela Bay Metropolitan Art Museum.

The stadium bowl and surrounding area will be transformed into the site of the Fifa Fan Fest.

The Polokwane Fifa Fan Fest will be based at the city’s 107-year-old cricket club. Situated a short distance from the new Peter Mokaba Stadium, the vast fields of the cricket club will provide a venue with a capacity of about 20 000 spectators. There will be both seating and standing options, with great views of the giant screens. Hospitality packages will also be available for those of you who wish to enjoy a more exclusive viewing experience. Getting to the Polokwane Fifa Fan Fest will be made easy due to its close proximity to the central business district, as well as the use of park/ ride facilities and shuttle buses.

The Rustenburg Fifa Fan Fest will be based at Fields College, a short distance from the city centre, with the Rustenburg Kloof as a picturesque background for the gathered crowds. With a capacity of more than 20 000 people, the venue will be able to cater for those of you who aren’t lucky enough to get your hands on one of the elusive match tickets.

Both parking and alternative transport arrangements will be in place to ensure easy access to the onsite festivities. 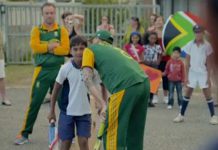