By his own admission, 67-year-old Claude Powell was a pretty average footballer.

In his brief playing days as a nippy striker who “created the openings, but didn’t score much”, it’s unlikely that he would have been mobbed for his autograph on the basis of any star football quality.

At Cape Town’s Green Point Stadium, excited youngsters will next year be hoping to fill football magazines, scrap books and tournament memorabilia with the prized signatures of the likes of Kaka, David Beckham, Wayne Rooney or Fernando Torres.

But Powell, a tiler working on the magnificent stadium that will host one of the semi-finals of the 2010 Fifa World Cup, is already putting his signature on World Cup history.

The sprightly pensioner’s job at the moment is to lay down tiles in the stadium’s player and team management dressing room areas – and he is literally leaving his mark.

“I’ve signed my name under a few of the tiles I have laid, so that I can one day tell my grandchildren that my name lies somewhere underneath this piece of our country’s history,” says Powell. “I’m proud to be playing my small part in completing this stadium and making the players’ lives a little more comfortable. For me, it’s a real honour being a part of it.

“The World Cup is huge for our country, and excitement is building,” Powell adds before laying another tile. “It will mean jobs for our people and a boost to our economy, and it will be a big success.”

A veteran of over 50 years in the tiling industry, Powell started work on the Green Point site a few weeks ago, as construction workers start applying the finishing touches to what will be one of next June’s most spectacular Fifa World Cup venues.

Nearly 80 percent of the stadium bowl is now complete, the roof is virtually complete, and remarkable progress has been made since the start of construction of the 70 000-seater stadium in March 2007. The pitch is being grown off site, in Stellenbosh, and will soon be laid.

On site from the start

The targeted completion date for Green Point is 14 December 2009, and few are more proud of this remarkable feat than the delightfully named Befaithful Gqokomo.

Another sprightly worker who looks younger than his 55 years, the teetotaling safety officer for construction firm WBHO has been on the site virtually since construction started.

Gqokoma remembers vividly the joy he felt in 2004 when Fifa President Sepp Blatter revealed South Africa as 2010 hosts. He didn’t know at the time, though, that he would be one of the 2 500 workers with a daily bird’s eye view of the erection of one of the tournament’s showpiece venues.

“When we started I wasn’t sure if we would manage it in time,” Gqokomo says. “But here we are, we’ve built up this stadium from scratch, and on 14 December we’re done and out of the stadium.

“I want to thank all the workers who have worked on this stadium with me,” Gqokomo said. “We’ve worked and delivered as a team, and I pray that our national team, Bafana Bafana, can also work as a unit during the World Cup – as we have here.”

It will include an urban park as well as a green area, practice and playing fields for seven different sporting codes, as well as clubhouse facilities, as an additional legacy improvement for the city. 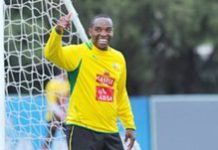 Benni McCarthy hangs up his boots