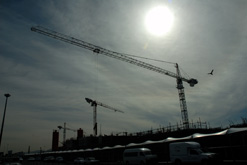 South Africa is pulling out all the stops to make sure the first Fifa football World Cup to be held on African soil will raise the bar for all future editions of the tournament.

The 2010 Fifa World Cup will be more than the world’s biggest sports gathering – it will also be a means to improve the lives of South Africans and citizens of other African countries.

Given this, it is intent on improving infrastructure, from transport and healthcare to safety and security, as well as leaving a lasting legacy for the country and the continent long after the final whistle has blown.

The South African government has committed itself to investing in the infrastructure, logistics, communications and security that will be needed to ensure that the 2010 Fifa World Cup is a resounding success.

It has promised the millions of fans who will be coming to watch the event that they will be safe in South Africa, with R6.8-billion earmarked for crime prevention and justice services.

Like many other countries, it will use this opportunity to speed up its plans to develop public transport.

In November 2006 the African Legacy Programme, a joint initiative of the Local Organising Committee and the government, was devised in response to one of the main inspirations behind South Africa’s preparations for 2010 – that being to leave a legacy for the African continent.

The programme aims to:

South Africa has made an undertaking that the legacy of the 2010 Fifa World Cup will not be confined to the host country, and has made the continent-wide legacy one of the core focus areas of preparations for the event. The African Union is actively involved in this continent-wide initiative.

The government is collaborating with African countries on a number of projects which will contribute to the African legacy. These fall in the areas of:

By 2010, South Africa will have built better sports facilities, a better public transport system and a better roads and telecommunications infrastructure.

But working for 2010 is also about building the country in ways that go beyond improving infrastructure: it’s about developing football and the youth, promoting a healthy lifestyle through sports, and fostering pride in the country and continent.

A major focus of this infrastructure development is, of course, the building or improving of the match venues and their environs. The hosting of the World Cup will leave a legacy of sports and recreation facilities in South Africa, in the form of 10 state-of-the-art stadiums and the development of other recreational facilities.

Providing sports facilities in communities that have not had such facilities before is a key benefit of hosting 2010. The World Cup will leave first-class venues for soccer, following apartheid-era neglect. But the upgraded facilities will also benefit sport and recreational activities in general.

In addition to the World Cup match sites, cities and provinces are also investing in the upgrading and development of other sports venues, some of which may be used as training venues. For instance, Johannesburg has allocated R337-million (US$42.4-million) to upgrade the Orlando Stadium and its surrounding precinct in Soweto and R69-million ($8.9-million) to upgrade the Dobsonville Stadium and its precinct, over a period of three years.

An additional R227-million ($28.5-million) has been budgeted to upgrade the Rand Stadium, the Cecil Payne Stadium in Roodepoort, Rabie Ridge Stadium and Ruimsig Stadium.

Already Safa House, the home of the South African Football Association, has been completed. It was officially handed to the association on 31 January 2007.

As the government works to deliver its guarantees for the World Cup, it will use this opportunity to accelerate the improvement of social services in key areas, including immigration and health services. In particular, programmes to strengthen the provision of emergency medical services will be fast-tracked.

In addition, cities have planned their own legacy projects. Johannesburg, for example, has identified seven.

In Cape Town, a new electrical substation is being built in Green Point to ensure enough power for the stadium and surrounding area.

Other municipal service upgrades are in the pipeline and the new owners of the V&A Waterfront are investing R7-billion in the precinct, six new hotels are planned, while other private sector companies are also investing.

The city aims to ensure that rail, rapid bus transport and a recapitalised taxi service move people about efficiently and reduce private car use during the tournament and in the long-term. 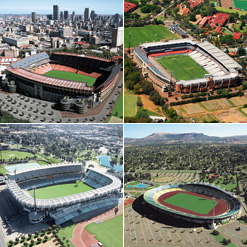 The standard of stadiums is crucial to hosting World Cup matches, while smaller stadiums need to be upgraded to be used as training venues.

In all, 10 stadiums have been earmarked for the World Cup, with five of them being built. They are:

Of these, four can be used to host the Fifa World Cup tomorrow. Ellis Park, Loftus Versfeld, Free State Stadium and Royal Bafokeng Stadium were all successfully used to host the 2009 Fifa Confederations Cup. A staggering 26.4-billion people watched the 2006 Fifa World Cup in Germany; many more are expected to watch in 2010.

Johannesburg, Cape Town and Durban all bid to host the IBC, but the cabinet approved Joburg’s bid. The city is now awaiting Fifa’s ratification of the cabinet’s decision.

The event will be also be broadcast in high definition television and fully broadcast on mobile phones, while there is already a strong movement towards electronic newspapers and multimedia reporting.

The IBC will be the media nerve centre for the World Cup. It will provide coverage to a cumulative audience of more than 30-billion viewers, and the government will use the construction of the IBC to enhance South Africa’s migration to high definition television and new broadcasting technology. 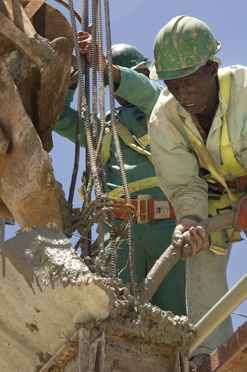 The South African government is making every effort to ensure that health and medical services are adequately prepared for the World Cup.

The Department of Health has set up a multi-sectoral and intra-governmental health technical task team that includes 15 expert workgroups, a national programme unit and nine provincial programme managers.

The Health World Cup Unit was finalising a master plan based on the inputs from these workgroups. Guarantees the department has made involve providing adequate healthcare infrastructure, including 24-hour emergency medical treatment and disaster management in the host cities.

Some R286-million has been budgeted to make sure it delivers on these guarantees.

In October 2007 the health department said progress had been made in improving a select service that would not only improve service delivery during the tournament but would also leave a legacy for the country. These include initiatives such as the improvements made in the emergency medical services, emergency centres, stadium medical facilities and port health services.

“Hospital systems are being strengthened and in addition to mass causality preparation, certain public and private health facilities are being designated as primary centres for the tournament. A comprehensive bed bureau will also be established at each designated hospital linking it with the provincial health operations centre, providing a real time picture of bed availability,” the department said.

Billions of rand have already been committed by the government for upgrading infrastructure, with the bulk of developments taking place in the host cities, it was said during a briefing by the Financial and Fiscal Commission in October 2007. The commission was briefing the Public Works Portfolio Committee.

To date, R17.4-billion ($2.2-billion) has been made available to the different provinces for use in the construction and revamping of stadiums.

The government has said that all developments, transport infrastructure in particular, is not only aimed at 2010, but well beyond in an effort to create sustainable infrastructure growth.

The commission recommended that a 2010 World Cup Legacy Management Policy should be introduced. Legacy projects linked to the World Cup are set to benefit the nation with improvements to infrastructure such as roads and public amenities. 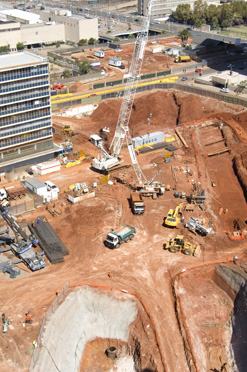 The plan is for host cities to have efficient public transport in place in time for the World Cup.

Already Johannesburg and Tshwane have announced their bus rapid transit (BRT) systems. Joburg’s project has been named Rea Vaya, or “we are moving”.

With BRT, the cities aim to provide faster, safer and more reliable transport than current public transport, making it more affordable. It involves the construction of “bus way corridors” on dedicated lanes and modernised technology.

In Gauteng the BRT systems will intergrate with the Gautrain, and in all cities they will work with already existing public transport programmes, such as Metrorail.

Construction of the infrastructure in Tshwane is scheduled to begin towards the end of 2008 and trial runs are scheduled to be made in late in 2009. The system is expected to start full operation early in 2010.

In Johannesburg, the new system will consist of 330 kilometres of special public transport lanes and intersections, running north and south of the city, and west and east.

The first phase of construction, Phase 1A, will be completed in time for the African Confederations Cup in April 2009. This route will run from Regina Mundi Catholic Church in Soweto to Jeppestown, and further north to Sandton. Phase 1B, to be completed in April 2010, in time for the World Cup, will comprise 86 kilometres and 102 stations. It will connect Dobsonville to Parktown, through Rosebank, and up to Rivonia, with a link east to Alexandra.

The full system of 330 kilometres, to be completed by 2013, will run from Orange Farm in the south, right through to Midrand in the north, with routes going west to Protea Glen in Soweto and Westgate, and passing through Northgate and Fourways.

The BRT will also run to the airport, and to Southcrest, through City Deep, in the southeast. A circular inner city route will service residents and workers.

Government spending on transport has already reached R9-billion. A vastly improved public transport system is one of the legacies that South Africa will secure from the hosting of the World Cup, as the opportunity will be used to fast-track an efficient, sustainable and affordable public transport system that will benefit commuters and the economy in the years following the event.

The Airports Company of South Africa is spending R1,2-billion ($150.9-million) on upgrading Cape Town International Airport to cope with visitors during the tournament and with a steadily increasing amount of traffic through the airport. An airport to city link is also proposed.

The Gautrain Rapid Rail Link is a state-of-the-art rapid rail network being constructed in Gauteng. It comprises of two links, namely between Tshwane and Johannesburg, and between OR Tambo International Airport and Sandton, northern Joburg. Apart from the three anchor stations on these two links, seven other stations will be linked by about 80 kilometres of rail.

Construction has started on the southern portion of the project, including Park Station, Rosebank, Sandton, Marlboro, Midrand, Rhodesfield and OR Tambo International Airport Stations, and south of Midrand.

It is steaming ahead through Joburg’s Modderfontein and road and intersection upgrades and traffic diversions to accommodate the construction activities are on the go, mostly near Sandton, Rosebank and Park Stations.

Construction and completion will take place in various stages. The Sandton to OR Tambo International Airport as well as the link between Sandton and Midrand will be completed and tested in 45 months, in time for the World Cup.

The remaining five stations, inclusive of the links between Sandton and Johannesburg’s Park Station and Midrand to Hatfield, will be completed and tested in 54 months, by 1 March 2011.