South Africa put on a stellar performance during the 2016 Olympic Games in Rio de Janeiro, in Brazil. The country racked up a tally of 10 medals, a feat achieved only twice before. We wrap up the medal moments from Rio 2016. 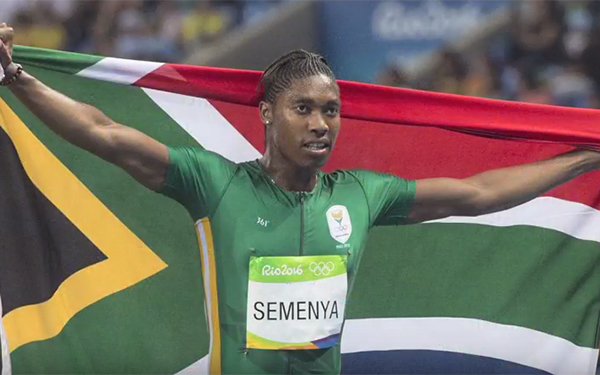 Runner Caster Semenya closes off South Africa’s medal tally with a gold in the women’s 800m on 20 August 2016 during the Olympic Games in Rio. (Image: Screengrab via YouTube)

The 17-day Olympic Games spectacle ended on 21 August in Rio de Janeiro, in Brazil. South Africa had a medal tally of 10 – two gold, six silver and two bronze medals. In the overall medal rankings, the country took the 30th spot.

The last time South Africa won 10 medals was at the 1920 Olympics in Antwerp, in Belgium, and again in 1952 in Helsinki, in Finland. The country made its debut at the Olympics in 1904, but did not win any medals then.

“Achieving what I just did now, I think the sky’s the limit,” he said after his win. “There’s no way I’m going to limit myself. I’m just going to try to better myself each and every time I race.”

Wayde van NIEKERK (RSA): “BOLT told me in Jamaica: ‘you will break the world record’. Tonight he said: ‘I told you you can do it’.” #AT 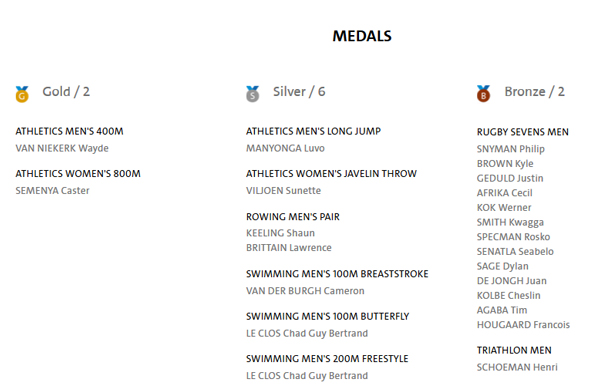 South Africa picks up 10 medals during the Olympic Games in Rio. (Image: Screengrab via Rio 2016)

Another gold medal favourite, Caster Semenya, lived up to expectations. She won the top spot in the women’s 800m. “I dedicate this to my team,” she said. “They’ve done a fantastic job. It’s a great feeling. Just fantastic. I couldn’t believe it. Just fantastic.”

Caster SEMENYA (RSA): “The field was really good. It was fantastic to race with such great athletes.” #AT #W800m #gold

Luvo Manyonga got a silver medal for his long jump of 8.37m – just one centimetre shy of the gold medallist. Two years ago, he battled drug addiction to crystal meth (known in South Africa as tik). Today, he is a proud holder of an Olympic medal.

Javelin thrower Sunette Viljoen scooped silver with a 64.92m throw. She is already eyeing the World Championship. “I want to be world champion,” she said.

See her reflect on her performance:

Shaun Keeling and Lawrence Brittain took silver for the men’s rowing pairs. Two years ago, Brittain was diagnosed with Hodgkin’s lymphoma. He won his battle with cancer to claim a spot in Olympic history.

Well-known swimmers Cameron van der Burgh and Chad le Clos both picked up silver medals – Le Clos in the 200m freestyle and 100m butterfly, and Van der Burgh in the 100m breaststroke. “This medal signifies my consistency for the last four years,” said Van der Burgh “I feel proud of myself.”

The South African rugby Sevens team, known as the Blitzboks, won a bronze medal for their efforts in Rio. “[It is] an absolute pleasure to see [rugby Sevens] in the Olympics,” said captain Kyle Brown of the sport’s debut at the 2016 Olympics. “Now I think it’s here for quite some time.”

Rugby Sevens is a faster and shorter adaptation of rugby.

For his participation in the men’s triathlon, Henri Schoeman picked up a bronze medal. “Having the medal around my neck is unreal,” he said. “I’ve made myself proud, Africa proud.”