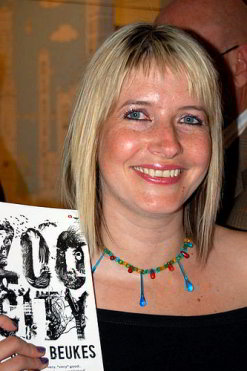 Cape Town-based author Lauren Beukes
is the pride of the nation after becoming
the first South African to win the Arthur
C Clarke award for science fiction.
(Image: Jacana Media) 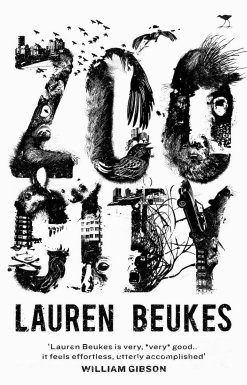 She received the honour for her second novel Zoo City at a glittering ceremony on 27 April 2011, held at London’s Apollo cinema in Piccadilly.

The Arthur C Clarke Award is the UK’s most prestigious award for a science fiction novel. Established in 1987 with a grant from the famous author of 2001: A Space Odyssey, it is awarded to the best novel first published in the UK during the previous year. The year and the prize money are the same, so Beukes will receive £2011 (R22 000).

With submissions this year among the highest ever, the six shortlisted titles were chosen from a long list of 54 titles submitted by 22 publishing houses.

Zoo City, published in South Africa by Jacana Media and released internationally by Osprey Publishing’s Angry Robot imprint, was shortlisted with five other works – The Dervish House by Ian McDonald; Monsters of Men by Patrick Ness; Generosity by Richard Powers; Declare by Tim Powers; and Lightborn by Tricia Sullivan.

Zoo City also won the BSFA’s award for best artwork for 2010 for the remarkable cover design by Cape Town-based artist Dale Halvorsen, better known as Joey Hi-Fi. The book also made it to the shortlist for best novel at the same ceremony, but lost out to The Dervish House.

Zoo City previously scooped the Kitschies Red Tentacle for 2010, given to the book that, according to the award organisers, “best elevates the tone of geek culture” and is progressive, intelligent and entertaining.

Joburg as we never knew it

Re-imagine Johannesburg in the 1990s, gripped by the Zoo Plague, which causes criminals, at the moment of their crime, to gain an animal familiar and a magical talent. Dependent on each other, neither the criminal nor the familiar can stand to be apart.

The familiars are the visible evidence of a criminal deed, and the perpetrators are known as Zoos. Ostracised and rejected, they are banished to the fringe of society, the ghetto – Zoo City.

Although she comes from a privileged background, Zinzi December’s nasty drug habit causes her to lose her way. Her parents throw her out and her life spirals out of control until one night her brother dies by her own hand. Zinzi lands up in prison, accompanied by her familiar, a sloth.

She’s soon released on parole but is now forced to live in Zoo City. Zinzi tries to live on the straight and narrow and pay off her drug debt – she does this by using her mashavi, or magical talent at finding lost items, although she draws the line at missing persons. She also runs 419 scams for the criminal syndicate that holds much of her debt.

Zinzi is presented with a lucrative offer she can’t refuse when a music producer hires her to locate a pop star. If she succeeds she could say goodbye to the dangerous Zoo City. Her adventure takes her from affluent suburbs to the Johannesburg sewers, from the rich and famous to a traditional healer.

Lauren Beukes was born in Johannesburg and is now a resident of Cape Town, with her husband and daughter.

Zoo City is her second science fiction novel, following the successful Moxyland, set in a futuristic Cape Town. Moxyland has also spawned a range of so-called Moxy Mutants – plush toys hand-made by an impoverished women’s group in the Karoo. Almost 70% of the proceeds are given back to the group.

As a TV script writer she has held the position of head writer for animation studio Clockwork Zoo, and was part of the development team for Urbo: The Adventures of Pax Afrika, a groundbreaking animated series shown on local television back in 2006. She also wrote 12 episodes of the Disney Playhouse show Florries Dragons, and worked on the pilot of the irreverent ZA News, which features puppets of prominent South African figures, especially politicians.

Zoo City is available online at Jacana’s website, Kalahari.net and Amazon UK, among others.