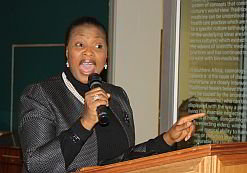 South African songstress Yvonne Chaka
Chaka has been recognised for her
efforts in the fight against malaria. 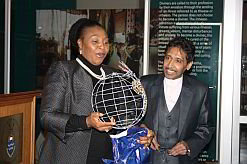 Chaka Chaka’s group were unaware that Ntuli had contracted malaria when they returned from a musical festival in Gabon. Not suspecting that her malaise signalled an infection, Ntuli was driven home to rest.

She visited a doctor the following day when her condition deteriorated, but it was misdiagnosed as general fever – according to Chaka Chaka.

“She was put in the intensive care unit at the Johannesburg General Hospital (now Charlotte Maxeke Academic Hospital) and two days later she died.

“That was a turning point in my life,” said Chaka Chaka, speaking at the opening of the Malaria in Context exhibition at Wits University on 25 July 2011.

Chaka Chaka became a goodwill ambassador for Unicef in 2005 and has since used this status to raise awareness about malaria.

It’s estimated that the mosquito-borne infectious disease kills at least 800 000 people, mostly pregnant women and children, in Africa each year.

Although Unicef initially approached Chaka Chaka to become a goodwill ambassador for HIV/Aids, she chose instead to focus on malaria due to the unexpected death of her band member.

During her life, Ntuli had also sung alongside legendary musicians such as Letta Mbulu and the late Miriam Makeba.

The tragic loss made Chaka Chaka realise how uninformed South Africans are about the disease, as it’s no longer a common killer in this country.

“I was totally ignorant of malaria as well,” she said. “You don’t know until it happens to you.”

Through her involvement in several awareness campaigns, Chaka Chaka has travelled the continent and the world to speak out about the disease and distribute mosquito nets.

Her goodwill ambassadorship for the Roll Back Malaria Partnership (RBM) is her most notable contribution to the cause.

This campaign – led by the World Bank, World Health Organisation, Unicef and the UN Development Programme – is a “global framework for coordinated action against” the disease.

For her efforts, RBM and the UN honoured Chaka Chaka with a special award of recognition in November 2010.

The New York-based Explorer’s Club honoured her in June 2011 alongside South African explorer Kingsley Holgate, who has fought for many years to combat the disease.

Chaka Chaka’s foundation, Princess of Africa, has also positioned itself as a leading voice on the issue.

In addition, she has endorsed Doctors without Borders’ (MSF) Kiss Malaria Goodbye, a new online campaign that seeks to raise awareness of malaria among South Africans.

At the exhibition opening, Wits University’s Faculty of Health Sciences Prof Ahmed Wadee said of Chaka Chaka’s efforts: “She has taken her public profile and used it as a goodwill ambassador.”

Sponsored by MSF, the exhibition illustrates the history of the disease in South Africa and shows how the country is fighting to eliminate the disease.

“I’m proud to be associated with this initiative the exhibition,” Chaka Chaka said.

‘It can be beaten’

Chaka Chaka has seen various improvements in curbing the impact of malaria. While in 2005 it used to kill at least one child every 35 seconds in Africa, statistics show that this has dropped slightly to one death every 45 seconds.

But figures show it remains a serious concern, she noted. Chaka Chaka believes African governments need to invest more in fighting the disease – and for it to become a public- and private-sector initiative.

“It can be done,” she said. “If we don’t do it now, we’re going to be judged by the next generation.”

Some countries have shown that it’s possible to eradicate malaria completely. Australia achieved this in 1970, and Morocco in 2007.

Mosquito nets have become highly successful in preventing malaria in risk-prone African areas. But actual treatment still needs to be improved, according to MSF.

The organisation said it was lobbying governments to adopt artemisinin-based therapy, which it said is more effective, safer and easier to administer than quinine.