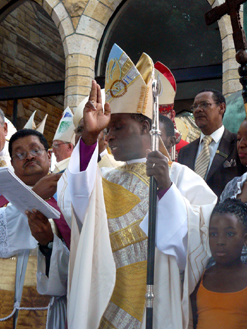 Thabo Makgoba, South Africa’s new – and
youngest ever – Anglican archbishop of
Cape Town, blesses the city after his
installation at St George’s Cathedral on 30
March. The archbishop of Cape Town
is traditionally also the primate, or head,
of the Church of the Province of
South Africa, a position once held by
Nobel Peace Prize laureate Archbishop
Emeritus Desmond Tutu.
(Image: Anglican Communion News
Service)

With youth on his side – he is the youngest person ever to be appointed to the position – the newly appointed leader of the Anglican Church of Southern Africa, Archbishop Thabo Makgoba, intends using his position to work for a world free of inequality, injustice and poverty.

Speaking at his installation ceremony at St George’s Cathedral in Cape Town on 30 March, the 47-year-old Archbishop emphasised the need for the Anglican Church to take the global agenda to heart. “The world is full of change and challenge, and we cannot take refuge in ‘my church, my parish, my pew’,” he said.

“From local community issues to questions about the global environment and our own carbon footprints, Christ calls us to join his spirit-led mission of peace and reconciliation, of empowering and transforming grace.”

Makgoba used the opportunity to reveal the vision he has for his tenure. “This is what I pledge myself to pursue today. I believe myself called to be Sekgo sa Metse: a vessel for peace with justice and reconciliation, and for cultivating a ‘yeast’ for healing the bruised, crushed and broken in God’s world.”

He told those gathered at the ceremony that he believed God had placed before the Anglican Church a vision of “the restoration of dignity of each person, created by God and precious in God’s sight”.

Also speaking at the service, President Thabo Mbeki encouraged Makgoba to continue in the footsteps of the great leaders who preceded him, “All of us have no doubt that you will continue the great struggle for non-racialism, non-sexism and the integration of communities that have been forcibly divided into racial groups.

“We also know that this Church, under your leadership, will continue its exemplary work of giving hope to the marginalised, following in the footsteps of the great patriots and leaders of our people, Archbishop Emeritus Desmond Tutu and Archbishop Njongonkulu Ndungane.”

Mbeki said Makgoba’s appointment comes at a time when the country has many opportunities to make significant advances in the struggle against poverty and underdevelopment, for peace, democracy and human fulfilment, and the critically important matter of moral regeneration.

The youthful archbishop’s rise through the ranks has been rapid. Just last year he was appointed the Bishop of the Anglican Church in Grahamstown soon to be followed in September by his appointment as the Archbishop of Cape Town.

Makgoba was born in 1960 in Limpopo province, but was raised in Alexandra township in Johannesburg. He holds a Bachelor of Science degree from the University of the Witwatersrand.

Following his graduation, Makgoba moved to the Eastern Cape, where he attended seminary at St Paul’s College in Grahamstown. After his ordination in 1974, he continued living in the small Eastern Cape town, where he rose quickly through the ranks of the church.

Makgoba’s leadership style, grounded in humility, is widely respected in the church. He is also known for not shying away from hard-hitting issues and immersing himself in the core of the church’s agenda. He has been vocal on issues like theological education and social development.

In a tribute to the newly appointed archbishop, Onkgopotse JJ Tabane, a former president of the Anglican Students Federation in the early 1990s, wrote in The Star newspaper that, “[Makgoba] has proved himself as an activist priest who, with his unassuming and non-threatening way, made his mark in everything he has touched.”

Spelling out the context within which Makgoba assumes office, Tabane says that historically the Anglican Church of Southern Africa has always prided itself on its ability to make the church relevant to society.

With this in mind it must have a clear programme on skills development to support initiatives of its own youth members, as well as work in conjunction with structures such as the Umsobomvu Youth Fund, which funds business and projects initiated by young people in South Africa.

He says that on a global level, Makgoba’s tenure comes at a time when the church is being tested on a number of core issues. These include homosexuality in the clergy and gay marriages – issues that are set to come to a head in the worldwide church and are also threatening to divide it.

Tabane says this has been clear in the agendas of Makgoba’s two predecessors. Archbishop Emeritus Tutu’s pivotal contribution to reconciliation in South Africa and Archbishop Ndungane’s passion for programmes that seek to address poverty and underdevelopment.