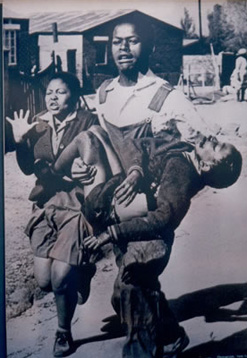 In South Africa June is known as “youth month” in commemoration of the June 16 1976 youth uprisings in Soweto, Johannesburg. This year marks the 32nd anniversary of the event and various activities will take place under the theme “entrenching our democracy: all youth to the polls”.

“June is a time when we focus our attention on taking stock of the progress we have made and rededicate our energies to tackling the complex and challenging issue of promoting the development of young people,” said Barbara Creecy of the Gauteng province’s arts and culture office at the launch of youth month.

“It is also a time when we remember and pay tribute to the important role young people have played in the struggle for our democracy.”

On that fateful day in June 1976 thousands of schoolchildren took to the streets to protest against Afrikaans being used as the medium of instruction in schools. The peaceful march turned violent when apartheid police attacked the students, firing teargas and live ammunition.

The first fatal victim of that march was the young Hector Pieterson. Photographer Sam Nzima’s famous image of his blood-soaked body being carried by Mbuyisa Makhubo, while Hector’s sister Antoinette Sithole ran alongside, caught the attention of the world.

According to the June 16 1976 Foundation, about 23 students were killed that day. News of the senseless killing of the students sparked retaliatory action from residents in the township, and the foundation quotes a figure of about 200 people who died that day.

The brave action of the students, which sparked the countrywide protests that marked the beginning of the end of apartheid, prompted the democratic government to etch the date in the country’s history in the most significant way. What was once known as “June 16 day”, was later renamed “youth day”.

And the “day” has been spread over a month with various activities aimed at the youth planned, including a three-day National Youth Festival in Cape Town from 14-16 June. Hosted by the National Youth Commission (NYC), the festival will consist of a number of development-based activities.

The NYC, in partnership with the Flemish government, will launch the “Batsha/Jeugd Project” aimed at increasing the capacity of four community centres around the Cape Town area. The resources of the community centres will be beefed up to facilitate youth development.

The University of the Western Cape has also been roped in to help provide information hubs. Each hub will host about 1 000 learners and youth from surrounding communities. Activities include career guidance workshops and exhibitions.

This year, government programmes aimed at the youth have included setting up structures to incorporate the youth into the country’s mining sector.

Mining is one of South Africa’s most lucrative industries, contributing 5.8 % of the country’s gross domestic product for 2007. South Africa mines several minerals and precious metals including coal, gold and platinum.

An Australian mining company, Coal for Africa, which has acquired rights from a local clan to mine coal in the area, is to invest R10 million (US$1.27 million) in scholarships annually for pupils in the Limpopo province.

“Our main concern so far is the lack of skills among local people when it comes to the mining industry,” said Coal for Africa chairperson Sam Farrell. “South Africa has serious skills shortages in the fields of engineering and we are forced to import skills from other countries. This has to change.” The scholarships will be available to high school seniors who are interested in mining.

The two collieries are expected to begin operating by June next year and Farrell said the company hoped to expand to other parts of South Africa and Zimbabwe.

Mining magnate Patrice Motsepe is also in the process of putting together a new project that is set to benefit young people who are interested in the country’s mining sector. Motsepe is planning on partnering with US hip-hop star and business entrepreneur Curtis James Jackson, popularly known in the entertainment industry as “50 cent”.

Motsepe is eager to set up a deal involving the rap star, who has spoken of his interest in getting involved in the mining industry. In May, Jackson was in South Africa to perform at a number of concerts and Motsepe took the opportunity to wine and dine the musician.

The two men visited several mines in Mpumalanga, where they had talks with chiefs from the local villages, who hold an interest in some of the company’s operations. The US rapper also had the rare chance to go down a mineshaft at the Two Rivers Platinum mine in Mpumalanga.

A youth mining indaba conference was held in Limpopo province, north of South Africa, in March 2008. Limpopo has a rich mining industry, with the world’s largest reserves of platinum group metals found in that province. These include rich deposits of chrome, vanadium, nickel and titanium.

Addressing delegates at the indaba, Seaparo Sekoati, the province’s parliamentary representative, said it is important for a path to be created to facilitate the participation of young people in the mining industry’s value chain. “This may not necessarily mean that you own the mines yourselves, but that you find ways of adding value to the industry as either partners or suppliers of goods and services to the mines,” he said. “Learnerships and internship … are also a critical area in which young people can derive benefit from their strategic relations with the mines.”

In Mpumalanga province, the youth have been encouraged to seize the opportunities available to them. Fish Mahlalela, from the province’s health and social services office, urged the youth to take up opportunities within the department. Referring to the many opportunities provided by government, Mahlalela announced, his department had intentions to award 320 bursaries to youth in the province to study in the areas of community development and social work.

Thirty youths from the province are also currently in Cuba studying medicine as part of an agreement between the governments of Cuba and South Africa. Another 625 students have also been subsidised to study health-related courses at various universities in the country.