This year’s theme is “Let’s defeat
imperialism for a world of peace, solidarity
and transformation”.
(Image: People’s World) 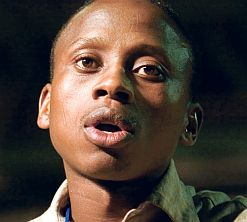 Andile Lungisa, the chairperson of the
NYDA, defines the event as a festival
of ideas. (Image: The Mail and Guardian)

Young people from across the world are due to gather in Johannesburg to discuss access to education, social transformation and democracy at the 17th World Festival for Youth and Students.

The event will be held at the MTN Expo Centre in Nasrec, southern Johannesburg, from 13 December to 21 December 2010. The opening and closing ceremony will take place nearby at the Orlando Stadium in Soweto.

Although this year’s theme, Let’s defeat imperialism for a world of peace, solidarity and transformation, sets an ambitious target, delegates hope to reach consensus at the end of the festival and sign a declaration of commitments.

The festival is held every five years by the World Federation of Democratic Youth (WFDY), which has been running for 65 years. The 16th edition of the festival was held in Caracas, Venezuela, in August 2005. South Africa is an active member of the WFDY, having sent 50 delegates to the 2005 conference.

The festival is endorsed and supported by President Jacob Zuma, Minister in the Presidency Collins Chabane, and the National Youth Development Agency (NYDA).

The NYDA’s role is to manage the festival with support from various young people’s organisations, government institutions and political interest groups.

Chairperson of the NYDA, Andile Lungisa, says the event is a celebration of ideas.

“They will be able to work in unison so they are able to confront the future as a force.When these young people take over in time, they will have a common agenda, a common thinking and common focus.”

The agency also hopes that after tackling issues such as democracy and social transformation, the delegates will leave the festival with a better understanding of the many issues faced by young people today.

There are also hopes that the signed declaration will garner government support in all the countries represented at the festival, and that appropriate action will be taken.

Lungisa also said he hopes young people will become architects of their own futures. Young people must define their own destiny and not be defined by others.

They must know that they have the responsibility of confronting the future like the other generations that came before them.

The National Youth Development Agency, launched on 16 June 2009 by President Jacob Zuma, concentrates on the socio-economic development of young South Africans so that they are able to reach their full potential.

Its target age group is between 14 and 35 years, with a special focus on young people with disabilities and those from low-income households.

The World Federation of Democratic Youth was founded on 10 November 1945 at the World Youth Conference in London, UK. It’s an international non-governmental organisation of the UN.

The federation comes out of the World Youth Council, which was formed during the Second World War to fight against fascism. The conference saw some 30-million young people from the allied countries, representing a range of political and religious beliefs, coming together to form the federation.

Today the federation takes an unbiased approach towards political and religious convictions, concentrating instead on promoting a sense of equality and mutual respect that is in the best interest of young people across the globe.

The federation supports many different international events that target young people and encourage them to find lasting solutions to the various challenges they face.