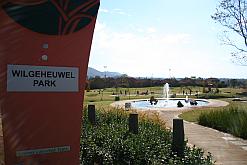 Wilgeheuwel Park was created in one day
and is one of Joburg’s successful Xtreme
Park projects, which brings new green
zones to busy developments. 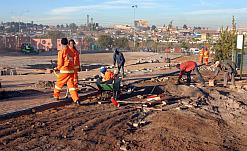 Diepkloof Park during the makeover
process, which took just 24 hours. 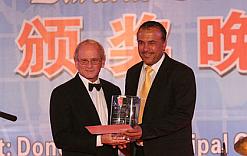 The City of Johannesburg’s innovative and uplifting Xtreme Parks project won a gold medal at the 2008 International Liveable Communities award ceremony, a programme run under the aegis of the United Nations programme for environmental protection. The ceremony took place in mid-November.

The Living Communities Awards were launched in 1997 and ceremonies have since been held in cities around the world including Madrid, Al’Ayn in the United Arab Emirates, Hamamatsu in Japan, Washington D.C., and London.

The programme is run as a UK-based non-profit organisation and is endorsed by the United Nations Environment Programme. It’s aimed at acknowledging those communities worldwide that enhance and protect their landscape and heritage, with an emphasis on sustainability, healthy living and best environmental practice.

Communities’ commitment to tackling social and conservation issues such as pollution, poor housing and unemployment are also a factor in the decision of the judges.

The Xtreme Parks project, which is overseen by Johannesburg’s City Parks division, sees neglected spaces around town transformed into vibrant community parks in 24 hours. Luther Williamson, MD of City Parks, is the brains behind the idea.

Williamson says he was inspired by the similar concept seen on the American television show Extreme Makeover Home Edition and felt that it would be an effective way to reduce the community development backlog, as well as encourage communities to take ownership of their green spaces, raise the profile of city parks in general, and attract the private sector.

In June 2007 the world’s first 24-hour park was created in Wilgeheuwel suburb west of Johannesburg, when a neglected patch of soil was transformed literally overnight into a charming 1.2ha play space complete with mini soccer field and fountain. Under normal circumstances, said Williamson, such an area would take three to six months to develop.

City Parks repeated the feat in 2008 when they tackled Diepkloof Park in Soweto, a 2ha area that was used as an illegal rubbish dump but now boasts a splash pool, mini-soccer field, multi-purpose court, landscaped gardens, concrete walkways, ablutions, and a natural amphitheatre area with a big screen for sport and cultural broadcasts.

Residents of both areas can now enjoy a better quality of life, while children have a safe, dedicated place to play. “I love the swings. I haven’t played on the swings for a long time and I feel like I can play on them until sunset,” said an excited nine-year-old of the Diepkloof Park.

This year there were 50 Liveable Communities finalists from five continents. The City of Johannesburg had three finalists in the Sustainable Project category, which is further divided into two sub-categories for Built and Natural projects.

In the Natural Projects section Xtreme Parks took gold along with New Zealand’s New Plymouth District. Johannesburg’s Klipriver Greening and Rehabilitation Project took silver in the same category, as did the town of Plzen in West Bohemia, Czech Republic, which successfully improved the quality of the water in its Velky Bolevecky pond, a popular recreation site. Broadland district in the UK also took silver for its Stairway out of Crime initiative.

In fact, all three Johannesburg finalists in the project category were lauded, because the massive Cosmo City housing development won a silver award in the Built Project sub-category.

The City, which was the sole representative from the African continent in 2008, came third in Category E of the Whole Cities category, which is divided into five sub-categories according to population. Category E is for cities with a population of over 750 000.

Johannesburg also scooped a Criteria award for its Planning for the Future strategies. Awards are given for each of the six criteria that are considered essential for liveable communities. These include Enhancement of the Landscape; Heritage Management; Environmentally Sensitive Practices; Community Sustainability; Healthy Lifestyles; and Planning for the Future.

“This community has really had to reinvent its philosophies and its values,” said New Zealand judge Rob Small, commenting on Johannesburg’s achievements. “It has been an enormous challenge but consultation and engaged communities have been the secret to delivering these outstanding programmes and projects.”

The judging panel, comprising environmental and horticultural luminaries, gathered at the Songshan Lake Science and Technology Industry Park in Dongguan, China, to decide on the winners.

Among them were experts such as Japanese academic Yoritaka Tashiro, president of the Japanese Institute of Landscape Architects, Belgian Gabriel de Buysscher of the International Federation of Parks and Recreation Administration, Krista Vilta of the City Environmental Department of Haapsalu Municipality, Estonia, and Canadian horticulturist Claudette Savaria who chaired the panel.