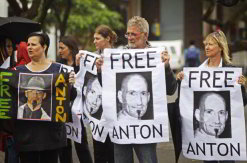 Journalists and supporters gathered
outside the Parliament building in Cape
Town in April to voice their outrage
at Hammerl’s continued imprisonment.
(Image: Free African Media)

South Africa’s media have used World Press Freedom Day as an opportunity to urge the government to ensure that press freedom is upheld and that journalists are allowed to do their jobs without interference, intimidation or detention.

In a statement to mark the event, the National Press Club also called on the Libyan government to immediately release South African photographer Anton Hammerl, who was seized by Libyan militia on 5 April, and other detained journalists.

The UN General Assembly declared 3 May to be World Press Freedom Day to raise awareness of the importance of freedom of the press and remind governments of their duty to respect and uphold the right to freedom of expression enshrined under Article 19 of the Universal Declaration of Human Rights.

World Press Freedom Day also marks the anniversary of the Declaration of Windhoek, a statement of free press principles put together by African newspaper journalists in 1991.

On behalf of the club, Abramjee appealed to the South African government to help with applying pressure to the North African country to release Hammerl, saying that he and the other captives are on many people’s minds.

“I’ve recently had discussions with Libya’s ambassador to South Africa, Dr Abdoola Al-Zubedi, who promised to assist. We hope to meet him this week again to follow-up and see what, if any, progress has been made. “

Abramjee said that journalists should be allowed to do their work without fear or harassment, and without being detained, although this is not the case in many parts of the world.

The National Press Club also paid tribute to reporters who were killed in the line of duty.

Abramjee said media freedom had to be protected, and that legislation that hampered the free functioning of the media would be “strongly opposed”. He asked newspapers to leave some pages blank in upcoming editions to symbolise censorship.

“Radio and TV stations should also dedicate a few seconds of ‘dead air’ to create awareness around media clampdowns,” he said.

Abramjee said there have been a number of worrying incidents where journalists have been intimidated and threatened with arrest and in some cases, even arrested while doing their job.

“We will continue to raise our concerns with the police leadership,” he said. “We must be allowed to work freely.”

He reiterated the need for the media to be fair, balanced and independent.

“If and when we err, we must be bold enough to apologise with the same prominence as the original report,” he said. “Journalists have to be bold and fearless. We must continue to expose wrongdoing at every turn. We must be the watchdogs for society.”

According to media freedom watchdog Reporters Without Borders (RSF), South Africa is ranked at number 38 in the organisation’s 2010 Press Freedom Index. This puts the country ahead of France (44), Italy (49), and the US (99), and well within the top 50 countries said to have “genuine press freedom”.

RSF’s ninth annual Worldwide Press Freedom Index, which covers the period from 1 September 2009 to 1 September 2010, reports on the degree of freedom journalists and news organisations enjoy in each monitored country, and the efforts made by governments to respect and ensure respect for this freedom.