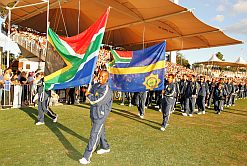 The South African Police Service team at
the opening of the 2007 World Police and
Fire Games in Australia.
(Image: SAPS)

The South African Police Service and Department of Correctional Services are proudly representing the country at the World Police and Fire Games in .

The combined team headed north at the end of July, where they will compete against thousands of their colleagues until the last whistle blows on 9 August.

The biennial World Police and Fire Games is one of the world’s largest sporting events. In terms of number of sporting codes as well as participants, it is bigger than any other event except the Summer Olympics. This year’s event is the largest in history, with a record 10 577 athletes registered to participate.

The previous tournament took place in , in March 2007.

’s 152-strong police team walked off with an impressive 202 individual medals – 79 gold, 61 silver and 62 bronze medals. In the process they broke three games records, in the women’s 100m and 400m athletics events, and men’s javelin.

The 2007 Correctional Services team brought home 129 medals including 56 gold, 46 silver and 27 bronze medals. This put the team into a final 7th place out of more than 60 countries.

In 2009 the police team has no less than 23 world championships to defend, while Correctional Services, which has notched up more than 600 medals since 1995, are defending their world champion title in soccer.

This year the Department of Correctional Services is represented by a team of 145, of which 35 are women and 110 are men. In addition nine managers, one medic and one biokineticist will accompany the team.

Participation in the games brings a new set of benefits to the tough job of law enforcement, including a sense of unity and camaraderie, relationship-building with other countries, knowledge-sharing, and enhanced physical fitness.

With almost 60 sports on offer, the games take place every two years. The prestigious event is open to both active and retired fire and law enforcement personnel from around the world, including correctional officers and customs officials.

has not yet hosted an edition of the World Police and Fire Games. Pretoria in Gauteng was among six contenders for the 2015 games, bidding against Sydney, Australia; Winnipeg and Toronto, Canada; Kuala Lumpur, Malaysia; and Fairfax in Virginia in the US. The won the bid.

has submitted a bid for the 2017 games. The bid document has been officially accepted. Should it succeed, not only will the international spotlight fall firmly on the country’s law enforcement prowess, but the event will bring in revenue of about $30-million (R240-million).