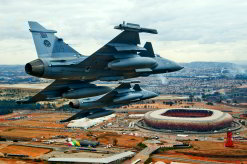 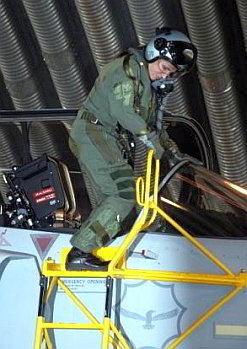 When Labuschagne touched down at Makhado Air Force Base in  Limpopo province, she had become the first woman fighter pilot ever to fly solo in the supersonic aircraft.

Formerly known as Air Force Base Louis Trichardt and today also called the Fortress of the North or Castrum borealis, Makhado is the most northerly of South Africa’s bases.

Labuschagne, who is identified by her call sign of Siren, is now the only female member of the SAAF’s elite 2 Squadron. The squadron, which flies the single- and dual-seat Gripens, is based at Makhado.

Labuschagne trained on the venerable Impala jet before graduating to the Hawk 120 lead-in fighter trainer in preparation for the step up to South Africa’s most formidable aircraft. Pilots are required to accumulate about 430 hours on the Hawk and pass several courses before they can sit behind the controls of a Gripen.

She got her wings in 2000 and a decade later is one of South Africa’s most highly skilled women pilots. Although she’s never felt that she’s had to work as hard as her male colleagues, the going has been tough, Labuschagne admits.

Back in 2004 she made military history as the first woman to fly in a Gripen, but it was from the back seat of the two-seater 39D. Today she is among the first group of locally trained Gripen pilots to complete their operational conversion course – the initial six received their training in Sweden.

The other local graduates are Lieutenant Koobendra Chetty (Saffron) and Lieutenant Colonel Gys van der Walt (Samurai). The three will complete their training in 2011, with Major Lance Mathebula (Lancelot) who trained in Sweden.

Gripen instruction takes place at 85 Combat Flying School, based at the Centralised Training Centre at Makhado and operating under the motto Detrimento sumus (Destruction is our business). The centre offers a computer-based instruction system and a virtual aircraft training facility, also known as a simulator.

According to 2 Squadron’s OC Gibson, the approximate ratio of air and simulator sorties is 50:50.

The Gripen is a single-engine fighter built by Swedish manufacturer Saab. Besides the SAAF, which was Gripen’s first export client, the craft are currently in service in the Czech, Hungarian and Swedish Air Forces.

The SAAF has placed an order for 17 single-seater 39C craft and nine two-seater 39D craft, and in April 2008 took delivery of its first Gripen.

To date 15 of the nimble fighters have arrived in South African airspace and the order is expected to conclude in 2012. The Gripens will replace the fleet of Cheetah fighters, some of which have been in service since 1986. The Cheetahs, which are basically refurbished Mirages, have now been retired.

Before the Gripens could formally join the SAAF fleet, they had to pass a stringent two-year test programme to adapt the craft to local systems.

“South Africa was the first export customer to select Gripen, and its recognition of Gripen’s capabilities and its faith in Saab has inspired other new Gripen customers,” said Saab president Åke Svensson, “including the Czech Republic, Hungary, the UK’s Empire Test Pilot School and more recently, Thailand.”

Svensson added that the success of future negotiations with other countries depends to a degree on the performance of the aircraft in South Africa.

BAE Systems South Africa CE Mike O’Callaghan said that the purchase of the Gripens and Hawks has revived the country’s defence and aerospace industry, and enhanced its reputation internationally. The UK-based BAE Systems is that country’s biggest defence contractor, and manufactures the Hawk fighters.

With a maximum speed of Mach 2 – twice the speed of sound or about 2 400km/h – and a highly advanced sensor system, the Gripen is widely regarded as the world’s top medium-weight fighter aircraft.

During the recent 2010 Fifa World Cup, Gripens and Hawks were responsible for much of the security in the air.