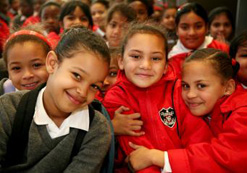 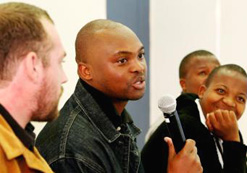 Writers Niq Mhlongo and Zukiswa Wanner
at a forum during the 2008 chapter of
the book fair. 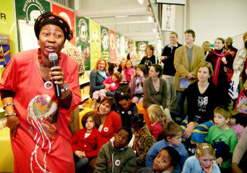 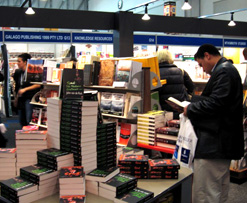 A wide variety of books will be available
for readers.
(Image: Cape Town Daily) 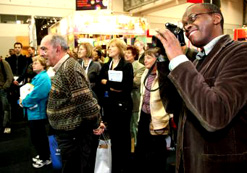 One of the highlights on the South African literary calendar, the Cape Town Book Fair, returns to the Mother City from 13 to 16 June for its fourth run.

Last year, more than 50 000 people attended the event, and were treated to a variety of activities including discussion forums on pertinent issues in the writing and publishing industry, author readings, as well as a wide selection of books on sale.

For publishers in particular, the fair is an opportunity to showcase their books and authors.

Commenting on this year’s event, fair director Vanessa Badroodien said there will be some changes including a number of interactive forums and activities.

“Our response as the Cape Town Book Fair has been to upgrade the pleasure factor at the fair and a stunning array of stories and ideas await this year’s fairgoers.

“It is a fact that many of the country’s most prominent intellectuals come to the Cape Town Book Fair to discuss, debate and voice their opinions,” Badroodien said in a statement.

A thorny issue to be discussed at this year’s event is that of published political satire.

The South African Broadcasting Corporation, the country’s national broadcaster, this year canned two investigative journalism programmes, which focussed on political satire and the somewhat love-hate relationship between cartoonists and politicians.

Well known South African satire cartoonist Jonathan Shapiro, popularly known as Zapiro, will lead the debate. Andy Mason, the author of the soon-to-be released book, What’s So Funny: Under the Skin of South African Cartooning, will share the chair with Zapiro.

Zapiro has been in the firing line of various politicians due to his sometimes controversial cartoons and is currently being sued by South African President Jacob Zuma for R7-million (US$ 872 000), for a cartoon the president deemed highly offensive.

According to the event’s website, the book fair will offer a wide selection of literary genres and activities.

“The richness of this year’s programme, as in previous years, contributes to everyone’s cerebral needs in a very elegant way. It is tremendously reassuring that books are still seen as valuable and remain vital to South Africans,” it reads.

Held at the Cape Town International Convention Centre, the event is now considered by its organisers as the biggest book fair in sub-Saharan Africa.

A writer’s perspective on the fair

South African writers who have been invited to participate in discussions and readings say while the festival has been great in promoting the love of books, more needs to be done to give it a comprehensive representation of South Africa’s literary talents.

Published writer and independent filmmaker Niq Mhlongo, is part of the post apartheid crop of writers to have emerged in South Africa.

Published by one of South Africa’s biggest publishing houses, Kwela Books, Mhlongo is the author of two successful novels, Dog eat Dog and After Tears.

“When we talk about South African writers, at the moment we only focus on people writing in English. There is not enough being done to highlight the vibrancy of indigenous writing. We could be doing more.”

Mhlongo says contrary to notions that indigenous books don’t move on the shelves, writers of African language literature tend to sell more books than English language writers, as more people can relate not only to the language, but the subject matter.

“The people who write in indigenous languages are best sellers. Not just because their works usually get prescribed into the school syllabus, but because their books are accessible.”

Mhlongo is however the first to admit that if he wasn’t writing in English he probably wouldn’t be a writer himself, “I don’t think I would be writing at all, if I was not writing in English. You see, the first books I ever encountered were in English, so really, that is the only writing I know.”

As with every year, small and new publishers will also be given an opportunity to showcase their work at the fair.

Horwitz is no stranger to the book fair and says it has always been a great opportunity for them. “Book Fair has been fantastic in that they have given smaller publishers stands at reduced prices or in some instances, at no charge at all. This has been great for us as we have an opportunity to be exposed to the market, which we wouldn’t normally have.”

Commenting on Botsotso Publishing’s past exhibitions, Horwitz is of the opinion that English books still sell well because of the reading audience, “The fact is, if you try and launch a book in Zulu or Pedi, you are going to get a small audience at the book fair. It’s hardly going to be noticed.

“We tried last year and only two people came. Cape Town is English, Afrikaans and isiXhosa. It’s those languages that will still get a preference.”

Writer Zukiswa Wanner, a regular at the fair, will be taking part in her publisher, Kwela Books’ Kwela Coffee Hour, where they will be discussing the worth of literary prizes in the writing industry.

Wanner is the author of two successful novels, The Madams and Behind Every Successful Man. She recently submitted her third novel to the publishing company.

Often referred to as a “chic-lit” writer, (books that are mainly aimed at female readers), Wanner says the fair offers a wide variety of reading material, “The diversity in writing is really large, and it’s really awesome.

“So many writers from different genres come together, from your children’s book writers, to adult fiction and non-English writers. The diversity in audience is something to be worried about though.”

Wanner says in the past years that she has attended the fair; she has often noticed a lack in writers from Cape Town’s townships like Gugulethu, Khayelitsha, Nyanga or Langa really incorporated into the activities.

While the organisers have tried to keep the festival affordable, this year’s entry fees will be R50 ($6) per adult per day, R20 ($2.50) for pensioners, and free of charge for students. Wanner says more people would be able to attend the festival if it was held towards the end of the month.

“It’s R50 to get in, and while that is really cheap, the fair happens in the middle of the month and the people of eKasi (slang for black townships) can’t always afford that.

“I would like to see more school initiatives, where teachers of languages at school can bring their learners to the fair whether they are English, Afrikaans or Xhosa, to come and have live and interactive reading lessons with other learners from other schools. So, I think there is a serious need to advertise the fair more in schools as well.”