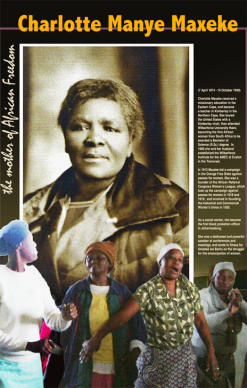 The heroine of the 1913 anti-pass campaign, Charlotte Maxeke, seen here in a poster.
(Image: Judy Seidman) 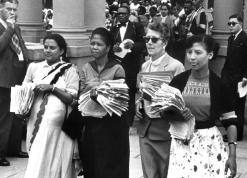 Women’s Day, celebrated every year on 9 August, and the annual activities around it honour all the women who, through the years, have led South Africa out of colonialism and apartheid and into democracy.

Women’s Month 2013 marks the 57th anniversary of the famous 1956 anti-pass march, which saw over 20 000 women, led by struggle heroines Lilian Ngoyi, Helen Joseph, Rahima Moosa and Sophia Williams-De Bruyn – who is still alive today – marching to the Union Buildings in Pretoria on 9 August to register their outrage over laws that forced black people to carry passbooks.

These documents condescendingly gave black people permission to be outside their homelands or designated areas, and failure to produce one on demand often resulted in arrest and imprisonment.

As part of the South African government’s commitment to restore the identity and dignity of people, especially women, the machines that print the country’s just-introduced Smart ID cards were recently named after the four female stalwarts.

Speaking at the government printing works in Pretoria at the ceremony in July, President Jacob Zuma said: “This gesture is intended to further immortalise their contribution to the struggle for liberation and of building a better South Africa, which is home to all who live in it, black and white.”

It was fitting that machines printing identification documents be named after women “who fought for justice, human rights and dignity for all”, said Zuma.

This year Women’s Day also commemorates the 100th anniversary of the 1913 anti-pass demonstration by women of the then Orange Free State, which was the first province to require passes for women. Back then, the provincial government announced that women living in townships and rural areas of the province could only get into urban areas if they had entry permits – which were only valid for a month, so new ones had to be bought regularly.

Permits were needed for various other reasons – to be able to reside on the employer’s premises, to seek work, to visit certain areas – and to use public bathhouses. It’s thought that the introduction of this final insult was the tipping point – the women of the province were not amused. They organised demonstrations and protests and this ultimately led to the 1913 anti-pass defiance campaign.

In those days, according to the Human Sciences Resource Council’s publication Women in South African History, pass laws were introduced and implemented by municipal authorities, so on 28 May 1913 some 200 women marched to the offices of the Bloemfontein City Council to petition the mayor to abort this plan. He wasn’t available, and so they returned the next day, only to hear him say that the matter was out of his hands, directly contradicting what the women had believed to be the case.

They were not satisfied with the mayor’s response, and burned their passes outside the municipal offices. Eighty women were arrested for not having their passbooks. The day after that, 600 women marched into town, intimidated police, and persuaded the magistrate to drop the charges against those who were arrested.

Two weeks later, police attempted to arrest a woman for not carrying her passbook. A riot broke out, resulting in the arrest and imprisonment of 34 women, who each served a two-month jail term.

The campaign escalated. Hundreds of signatures were collected in a petition. There was also a passive resistance component, where black women simply refused to carry the required documents. In addition, women of all races began to voice their indignation.

In August 1913 Sol Plaatje, editor of Tsala ea Batho (Friend of the People), visited the 34 women who were still imprisoned at Kroonstad Prison, and was horrified at the conditions there. He wrote of his experience in his book Native Life in South Africa, saying: “A severe shock burst upon us, inside the prison walls, when the matron withdrew the barriers and the emaciated figures of ladies and young girls of our acquaintance filed out and greeted us.”

The plight of the prisoners affected Plaatje deeply. “Was ever inhumanity more cold-blooded?” he asked. “Tears rolled down our cheeks as we saw the cracks on their bare feet, the swellings and chronic chil­blains, which made them look like sheep suffering from foot-and-mouth disease.”

The women were released – Plaatje noted that a month later, most of them had returned to their homes.

One of the leaders of this particular struggle was Charlotte Maxeke, who received a BSc from Wilberforce University in the US in the early 1900s, becoming the first black South African woman to obtain a degree.

Maxeke later founded the Bantu Women’s League, South Africa’s first organisation for black women. It was a branch of the African National Congress (ANC), which didn’t accept women members at the time. According to South African History Online, although the pass requirements had been relaxed in 1914 because of the breakout of the first world war, the threat arose again four years later, prompting Maxeke to establish her organisation.

The league’s structure was later adopted by the ANC and re-launched as the ANC Women’s League, with Maxeke as its first president.

Since those repressive days, the country has made great progress in advancing women’s rights, although it wasn’t until the Bill of Rights came into play in 1993 that women were recognised unconditionally as being equal to men. In article one, point one, the Bill of Rights states that all South Africans are born free and equal in dignity and rights, and in point three, that men and women shall have equal protection under the law.

The Constitution guarantees that no woman – or man, for that matter – shall suffer discrimination for any reason. In section nine, dedicated to equality, we read: “The state may not unfairly discriminate directly or indirectly against anyone on one or more grounds, including race, gender, sex, pregnancy, marital status, ethnic or social origin, colour, sexual orientation, age, disability, religion, conscience, belief, culture, language and birth.”

Sadly, though, many South African women are still disadvantaged, especially in economic terms. They also have to endure one of the world’s highest rates of domestic violence, rape and other forms of abuse.

However, according to the minister of women, children and people with disabilities, Lulu Xingwana, the Women Empowerment and Gender Equality Bill has been submitted to the cabinet committee. This piece of legislation will supply guidelines for promoting the empowerment of women, gender equality, and compliance in the public and private sector with women’s rights.

The weeks of Women’s Month have been allocated certain themes, said Xingwana. The focus of weeks one and two is the restoration of identity and dignity, while the focus of week three is job creation, and that of week four is the development of rural women.