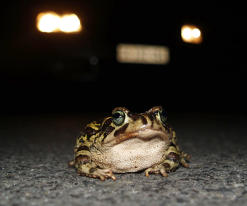 Volunteers brave dangerous roads and cold, wet nights to help hundreds of these beautiful amphibians reach their watery breeding sites, and find their way home safely once the breeding season is over. 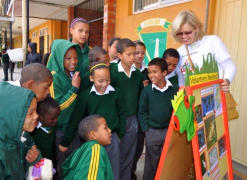 Education initiatives and creating awareness about the plight of the toads, particularly as the breeding season approaches, is another important part of Alison Faraday and her conservation colleagues’ work. 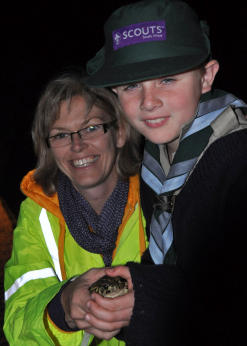 For a number of years committed volunteers and supportive communities in the Cape Town area have been working hard to ensure Western Leopard toads have a chance of survival in the wild.
(Images: Alison Faraday) 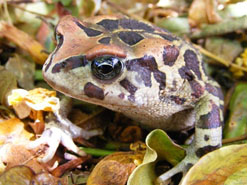 Western Leopard toads are classified as threatened on the International Union for the Conservation of Nature’s Red List.
(Image: blog.noordhoekvillage.co.za)

Every year around August, when the Western Leopard toads’ breeding season begins, volunteers from the greater Cape Town area spend many hours ensuring that the little creatures survive their annual migration to breeding sites.

Saving as many toads as possible is a labour of love for the volunteers, who brave dangerous roads and cold, wet nights to help hundreds of these beautiful amphibians reach their watery breeding sites, and find their way home safely once the breeding season is over.

Suzie J’Kul, a founder of Noordhoek Unpaid Toad Savers and its subsidiary, South Peninsula Outstanding Toad Savers (Spots), says volunteers and members of the public are contributing to citizen science to ensure the species survives.

“Through volunteering we are saving an endangered species from becoming extinct, as well as ensuring that our children’s children will inherit this biodiversity that they very much deserve to be a part of,” J’Kul says.

Every night, at 18h15 when it gets dark, the first team of volunteers heads out onto the roads, armed with flashlights and reflective gear, to look for toads. The first group works a four-hour shift until 22h15, and then the next team takes over.

“It is hard work, but worth it,” says Alison Faraday, co-ordinator of Spots.

Western Leopard toads (Amietophrynus Pantherinus) are classified as threatened on the International Union for the Conservation of Nature’s Red List.

They are endemic to a small area of the South Western Cape region, Cape Peninsula and Agulhas Plain.

Also known as the August frog, they are easily identified by their beautiful markings of chocolate to reddish-brown patches with a bright yellow or black edging on a pink or grey background.

Faraday says urban development, habitat degradation and road traffic are some of the biggest threats to the long-term survival of local populations.

Breeding usually takes place during August, but has also been recorded in late July, September, and some breeding calls have even been heard in early October. The start of the season depends largely on rainfall and temperature and sometimes occurs during warmer weather followed by periods of rain.

These variables make the work of volunteers even more difficult as only the toads know exactly when the breeding migration will take place.

Faraday says July and August are the most dangerous months for the toads.

“This is when most of the mortalities happen, when they are hit by cars and killed,” she says.

“Busy roads in the urban areas where they live are death traps, and this animal needs all the help it can get to survive. What we do is pick up as many of these little guys as we can.”

For a number of years committed volunteers and supportive communities in the Cape Town area have been working hard to ensure Western Leopard toads have a chance of survival in the wild.

“This is something that untrained volunteers can do something about. It is incredibly rewarding,” Faraday says. “We have amazing volunteers.”

About 18 suburbs and 100 volunteers are currently involved in the initiative. Ahead of each breeding season, volunteers receive training and they are rostered for four-hour shifts at a time to drive up and down the busiest roads, picking up toads.

An important part of their work is also to keep records of the number of toads they see and rescue, noting whether they are dead, alive, male or female and their approximate age. This helps the toad conservation organisations assess the success of their work, and where they can improve.

Noordhoek volunteers have gathered six years of records for the area, and neighbouring suburbs have been collecting data for three years.

“We need at least 10 years of statistics to clearly determine the increase or decrease in Western Leopard toad numbers as well as to confirm suspected theories on breeding patterns,” says J’Kul.

Recently the City of Cape Town’s Environmental Resource Management Department successfully rehabilitated a breeding site for the toads in Kommetjie, a suburb of Cape Town.

The site, known as Skilpadsvlei, is a historic wetland area in Kommetjie that was drained and filled during the 1940s. It was the only known breeding site for the toad in the area.

The City of Cape Town provided phased funding to revive the wetland, which included improving the open space around the area for public enjoyment, as well as restoring the ecological functioning of the system. Part of the project also ensured that the water quality was of a high standard and continuously monitored.

The restoration of the wetland is an important step forward in the conservation of the endangered toads, and it seems if the amphibians are taking to the rehabilitated area.

In June 2012, Western Leopard toads were seen at the new site during the very first breeding season and in November toadlets were recorded.

Unfortunately, two of the three adult toads that selected Skilpadsvlei as their preferred breeding site were later killed on the roads adjacent to the wetland, and this is why the work of volunteers patrolling roads is so important.

The Noordhoek Unpaid Toad Savers and Spots organisations are always in need of more volunteers to go out at night when the migration period begins.

They also invite the public in all areas where the animals are found to inform them of any activity around the time when the breeding season is expected to start.

However, Faraday says that they are looking into finding a more sustainable, long-term solution to protect the toads.

“Ultimately we need something that is permanent,” she says.

This year the Noordhoek volunteer organisation plans to test a small barrier system, involving sunken buckets that are to be installed on one of Noordhoek’s busiest roads.

The buckets will be lowered into the ground at areas of the road where toads usually cross. As they approach, the toads will fall into the buckets, and at intervals volunteers will carry them across the road.

“This will hopefully help to save even more toads. It is a good start,” Faraday says.

Even though the buckets will delay the frogs for a short while, at least they will be protected and reach their breeding sites safely.

Education initiatives and creating awareness about the plight of the toads, particularly as the breeding season approaches, is another important part of Faraday and her conservation colleagues’ work.

“It is absolutely essential to get kids aware and we also have bumper stickers that volunteers stick on their cars,” Faraday says. She regularly presents talks at schools to inform children about the toads and how they can help to protect them.

Every year they run an awareness campaign to appeal to local motorists to drive more slowly in the affected areas at night and early in the morning, while the migration is underway.