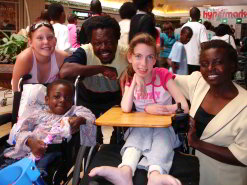 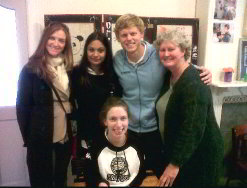 In September 2011, local hockey coach Craig Sieben will embark on an epic journey of goodwill and discovery across Africa. He’ll pass through 15 countries on his way to Port Said, Egypt, relying solely on people’s generosity to get there.

Sieben plans to walk some 15 000km along the continent’s eastern side – starting in Cape Town and progressing through Botswana, Zimbabwe, Zambia, Mozambique, Malawi, Tanzania, Burundi, Rwanda, Uganda, Kenya, Ethiopia, Eritrea and Sudan, before arriving in Egypt.

During his 222-day Walk4Wheels adventure, Sieben will be on a mission to significantly change the lives of one disabled child for every day of travel, by promoting the needs of the differently-abled in each country. He’ll achieve this with workshops, by distributing educational material and through coverage in the local media.

Walk4Wheels will also seek to raise funds to provide the 222 children with the aids and devices they need, and their families and communities with knowledge.

Originally planned as a solo trip, Walk4Wheels has now hooked up with the Chaeli Campaign, a Cape Town-based non-profit organisation. The Chaeli Campaign was started in 2004 by five girls between the ages of six and 12 to raise money for a motorised wheelchair for Chaeli Mycroft, who was born with cerebral palsy.

The big-hearted group – young Chaeli, her sister, and three close friends – raised the R20 000 (US$2 950) needed in just a few weeks. Inspired by their success, they decided to take their campaign further, because there were others who needed help.

Since then, they’ve changed the lives of hundreds of children, and got the beneficiaries’ families, friends, classmates and communities involved too. The organisation also provides occupational and speech therapy, and physiotherapy.

The girls now comprise the junior committee of the Chaeli Campaign.

Among other accolades, Chaeli was named the youngest-ever finalist in the Shoprite Checkers Women of the Year 2005 programme – she was just 10 at the time. In 2007 the Chaeli Campaign won the title of Nation-builder of the Year at the annual Proudly South African Homegrown awards.

The 27-year-old Sieben describes himself as a “hockey coach, entrepreneur, educator, someone searching for more, and a way to pay it forward.”

He adds that as a child, his parents encouraged him to make things happen, rather than rely on others. They also instilled in him a sense of appreciation and gratitude, although the family was not wealthy.

“I love South Africa, and am proud be African. Although I have travelled throughout South Africa and abroad, I have never had the opportunity to experience the wonder of travelling through the rest of Africa.”

This motivated him to start planning an expedition across the continent, but it wasn’t long before he realised that it would be more meaningful if his adventure could help others.

After hearing from Chaeli Campaign CEO Zelda Mycroft that the average life expectancy of a disabled person in Africa is 18 years old, it became clear that partnering with the Chaeli Campaign would add value and meaning to the initiative, and Walk4Wheels was born.

Walk4Wheels aims to eradicate the stigma associated with disability that still prevails in much of Africa, and educate communities about the needs and capabilities of disabled children. It will also help to spread the work of the Chaeli Campaign’s network further into Africa.

Those interested can get involved in various ways, from individuals sponsoring a day’s activities for R222 ($33), corporate sponsors helping to buy assistive devices, or families willing to give a weary traveller a bed for the night.

Details can be found on Walk4Wheels’ blog or on the Walk4Wheels Givengain site.