The Kransberg in Marakele National Park, whose rocky peaks are home to the world’s biggest colony of Cape vultures.
(Image: SANParks) 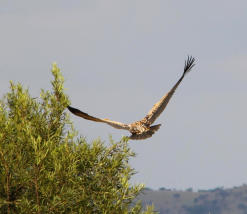 Just one of the many rehabilitated and released Cape vultures which owe their lives to the dedicated VulPro team.
(Image: VulPro)

A young lappet-faced vulture tagged and fitted with a GPS/GSM tracking device, at VulPro.
(Image: VulPro) 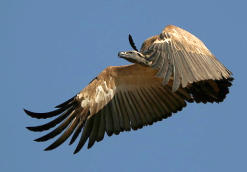 The Cape vulture is one of the largest Old World vultures, but is under threat from electrocution and poisoning.
(Image: Wikipedia)

The newly established Limpopo Vulture Project aims to cut down on the number of vulture deaths caused by electrocution, and help to halt the decline in the numbers of these majestic birds.

“Limpopo is home to the two biggest colonies of Cape vultures in the world,” says Kerri Wolter, the founder of the Vulture Conservation Programme (VulPro).

Wolter is wholly committed to the vulture cause and this dedication has been recognised in her nomination as one of five finalists in the running for this year’s Tusk Conservation Award. This is given to an up-and-coming conservationist who has already made an impact in his or her chosen field, and the winner and runners-up receive grants to help them continue with their work. Wolter is up against four other nominees, two from Kenya and two from Madagascar.

She established VulPro near Hartbeespoort, about 35km west of Pretoria, in 2007 after managing the vulture unit at the Ann van Dyk Cheetah Centre (formerly known as De Wildt), located in the same area, for two years. VulPro doesn’t just protect and rehabilitate vultures for eventual release back into the skies, but has a strong educational component as well. It hosts groups of schoolchildren and also visits schools with a live bird, to allow the children and their teachers to get up close with the vulture and learn more about the importance of protecting the species.

VulPro conducts an annual census of breeding pairs in the area, titled the Magaliesberg Risk Assessment.

Now Wolter is working with the Endangered Wildlife Trust (EWT) and the Limpopo operating unit of national power supplier Eskom on a vulture-tracking project, which will establish where they like to gather and will provide information that will make it easier to keep the birds and power lines apart, or make the lines safe.

The Limpopo Vulture Project was conceived by EWT senior field officer Constant Hoogstad, who approached Eskom with the idea. He wanted to use the data thus gathered for his thesis. There are two EWT units involved, the Birds of Prey Programme and the Wildlife and Energy Programme, which explores the dangers posed to birds by communications and power infrastructure.

Through GSM devices attached to the birds, the team will be able to track their movements and establish their territory range, and learn where the different species congregate. Eskom will use this information to plan the installation of new power lines, and also to investigate the link between vulture movements and line faults in the province.

“The birds roost on power lines and they die when they collide with a structure in flight, or create a short on the line and get electrocuted,” Wolter explains. “It’s one of their biggest threats. The aim of this project is to identify the vulture hotspots and then take steps to mitigate the deaths.”

Eskom can then be proactive and make Limpopo lines safe by fitting bird guards, says Wolter, which stops the birds coming into contact with critical areas on towers, without harming them, and will prevent electrocution. “Eskom will also consider using bird-friendly structures when planning new developments.”

She emphasises that it’s completely up to the power utility to use the data constructively and to implement any vulture-saving measures. “They must be willing to follow up on the research, and ensure the mitigation is done.” However, since Eskom has already installed bird guards on power lines in KwaZulu-Natal, resulting in an improvement in service quality and a reduction in power outages, it is certain to do the same in Limpopo.

Keeping an eye on the restaurant

Hoogstad says that one of South Africa’s most active vulture restaurants is located close to the provincial capital Polokwane, on Mockford Farm, a prominent pork producing facility. A vulture restaurant is a place where fresh, untainted food is provided regularly for the birds, and this particular vulture restaurant attracts a variety of species.

The team will focus on two vulture restaurant sites for capture and tagging – they are Mockford, and the well-known Moholoholo Wildlife Rehabilitation Centre just outside Hoedspruit.

Once the birds are fitted with the tracking devices, the team will monitor their behaviour in relation to the site of their restaurant – after a year, the restaurant will be moved to a distant location and the birds will be tracked to see if their movement changes accordingly. If it does, this data will help the team to establish how long it takes for vultures to adapt to the new situation, and whether moving a vulture restaurant is a practical answer to keeping the birds away from power lines and wind farms.

Contrary to popular myth, the vulture is not evil, dirty, diseased or clairvoyant. It plays an important role in the ecological cycle by disposing of carcasses, thus preventing the build-up of large numbers of flies around the remains, and minimising the spread of diseases such as anthrax. The vulture is an indicator of the overall health of the ecosystem, as it will suffer if something is out of balance.

Vultures are also intelligent and sociable birds, and form lifelong breeding pairs that share parental responsibilities, with both partners incubating, feeding and caring for their chicks.

South Africa is home to nine vulture species including the lappet-faced (Torgos tracheliotus), bearded (Gypaetus barbatus) and white-headed (Trigonoceps occipitalis) vultures – however, the only one endemic to the region is the Cape vulture (Gyps coprotheres), around 10kg in weight when mature, with a magnificent 2.5m wingspan. Like the other eight, this is one of the so-called Old World vultures, found in Africa, Asia and Europe, and belonging to a different family from the birds found in the Americas.

It’s listed as vulnerable on the Red List of the International Union for the Conservation of Nature (IUCN), and, says the organisation, is likely to keep declining unless conservation efforts continue and are successful. The IUCN lists the population level about 8 000 to 10 000 individuals (2006 figures), but shrinking.

“There are 800 breeding pairs in the Blouberg Nature Reserve and 550 to 600 on Kransberg in Marakele National Park,” says Wolter, referring to the world’s two largest colonies. “The province is a stronghold for vultures.”

Other threats to their existence include deliberate or accidental poisoning, often because they eat carcasses poisoned by farmers to kill jackals and leopards, which prey on flocks and herds; urbanisation leading to habitat loss; killings for muthi, or traditional medicine; a decrease in the availability of food; and veterinary drugs such as the anti-inflammatory ketoprofen, which is lethal to vultures.

The EWT’s Birds of Prey Programme and its partners celebrate International Vulture Awareness Day in early September every year. In addition, the Gauteng Department of Agriculture Conservation and Environment has made the Cape vulture one of its priority bird species, along with the blue crane, martial eagle, secretary bird and others.

A group of vultures in flight is called a kettle, while a group that is feeding is called a wake. The collective nouns committee, volt, and venue refer to vultures resting in trees.