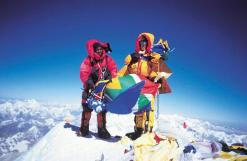 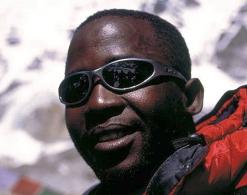 Mountaineer and motivational speaker Sibusiso Vilane once told the assembly at a briefing in Parliament that when he reached the top of Mount Everest for the first time, he dropped to his knees and “thanked the Lord for taking me to the top of the mountain”.

Then he wept, stood up and smiled.

“I was grateful there was an African standing on top of the world,” he recalled.

It was probably the best explanation he could conjure for a feeling that couldn’t be expressed in words.

Now Vilane is looking to conquer nature again by crossing the flat sea ice of the Arctic Ocean.

A trek to the North Pole – the last phase of the Three Poles Challenge – is the next adventure for the 41-year-old.

He follows in the footsteps of Norwegian explorer Erling Kagge, who was the first person to complete the trio of challenges, and if he is successful, Vilane will be the first black person to achieve the feat.

While most South Africans embark on Easter activities in the first week of April, Vilane is spending the period between 4 and 13 April traveling 120km across the Arctic Ocean, in a bid to reach the pole.

He’s already completed the first two parts of the challenge: the South Pole in 2008 – which he reached with Team Extreme partner and fellow South African Alex Harris – and the daunting Mount Everest, which he summited twice in 2003 and 2005 using different routes.

He was recognised as the first black African to complete each of those expeditions.

“I have an inherent desire to inspire others and to share something positive with people. I also want to leave behind a lasting legacy,” he said of his feats.

Vilane started his trek from the Norwegian village of Longyearbyen before setting off to a spot located a chilly 89 degrees north of the Arctic Circle.

From there he’s crossing the ice on skis to the North Pole, accompanied by a team from Norway. Since the group is skiing in the summer, up to 8-10 hours a day, the sun is continuously above the horizon, providing them with 24 hours of daylight.

Once they reach 90 degrees north, which is the North Pole, they will be picked up by helicopter and a charter flight will return them to Longyearbyen.

Preparing for the gruelling Arctic

Vilane faces many potentially fatal dangers – he has to endure temperatures as low as -50 degrees C, be on the lookout for polar bears and avoid weak spots in the ice that he could fall through.

He also has to be wary of the shifting sea ice that is thinning by the day.

To prepare for these gruelling conditions, Vilane’s training programme included running and cycling. He also spent a lot of time pulling a car tyre, which he says is a standard training method for most explorers who embark on this expedition.

“Your muscles take strain because you exert them on tough terrains while pulling a heavy load,” he explained.

Born in Mpumalanga province in 1970, Vilane began life as a cattle herder in Swaziland. His family relied on the money he earned and they forbade him from attending school until he was 10.

In 1993, he started work as a game ranger at Malolotja Nature Reserve in Swaziland.

His career as an explorer began when he met his first climbing mentor John Doble in 1996. In that same year Vilane and the former British High Commissioner to Swaziland climbed a number of peaks in the Drakensberg together.

Besides the Three Poles Challenge, Vilane officially joined the exclusive Seven Summits Club in 2008 when he climbed Mount McKinley in Alaska.

After reaching the top of Mount Kilimanjaro in 1999, it took him just nine years to conquer the six other peaks and be officially accepted into the club.

Inspiring others through his feats

It is no wonder that the man who received the Order of Ikhamanga in 2006, for his contribution to mountaineering, would turn his achievements into something fellow South Africans can learn from.

Vilane earns a living not from climbing, but from talking about it. He is a motivational speaker who thrives on inspiring others, especially young people, to achieve their goals.

“They will learn to persevere, to have the will to succeed and give life a purpose. I would be looked at as a role model and an inspiration,” he said of his service to society.

He abides by one line that he believes gives people determination: “Each and every one of us has got what it takes to be great.”

For Vilane, mountaineering and exploring is for everyone, and whoever has the desire and a clear mind to take on the challenges will succeed.

“It is my desire to inspire Africans who think they cannot do these things. Africans have been sitting back because of a lack of exposure and a lack of funds.”

He relies on three traits that he says each mountaineer needs: self-belief, self-motivation and a strong desire to succeed, because “it’s important to have the ability to persevere, despite the difficulties that lay ahead of you.”

Vilane is adamant that mountaineers and explorers do not interfere with nature and that they actually help in curbing some of the ecological issues we currently face.

“We are sensible and responsible when we hike or climb. We take care of the mountain; we do not bring it down with us.”

He said that he and other explorers are helping expose the issues that affect the world.

He also said that without adventurers, life would be quite dull and that we would not have as much knowledge of the world.

“How would we know if the Arctic ice was melting if people did not explore it?”

Asked about his family’s reaction to his latest expedition, Vilane said that Nomsa, his wife of 17 years, and his children were not surprised.

Nomsa doesn’t mind him exploring as she knows Vilane can take care of himself.

One of his children has also taken up climbing. In 2010, at the age of 17, his eldest daughter Setsabine climbed Mount Kilimanjaro with her dad. And according to Vilane, she is keen to do it again.

“I will be happy if one my children wanted to climb Everest because I will be there for them. I have seen fathers and daughters, and fathers and sons climbing together and it is wonderful; a great bonding experience.”

Exploration, he said, has made him a better person in all spheres of life and has helped him to appreciate nature, people and his family.

For the love of adventure

In an interview with CNN reporter Nkepile Mabuse for the magazine programme African Voices, Vilane said that the reason there were few black mountaineers was not because they lacked the ability to do it, but they just did not understand it.

“For the majority of black people, when I tell them I am going on an expedition, they ask, ‘What do you gain from it?’ They look at the material gain,” said Vilane.

He added that South Africans failed to understand the idea of having to temporarily give up the comforts of home to go on a gruelling excursion up a mountain.

Vilane, however, does it for the inner satisfaction and sense of achievement. He added that the feeling of being at the top of a mountain cannot be duplicated.

“Even if I try to explain it to you, you will not grasp it until you do it yourself,” he said. 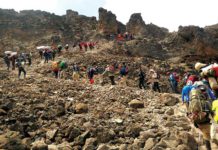 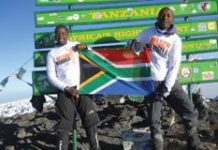 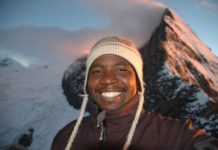