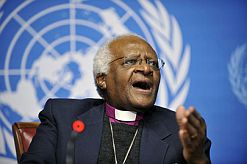 Archbishop Desmond Tutu addresses the
ninth session of the Human Rights Council
in his capacity as head of the fact-finding
mission to the southern Gaza Strip town
of Beit Hanoun. (Image: United Nations) 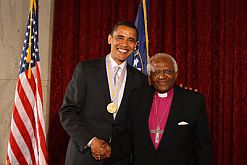 Tutu and then Senator Barack Obama at
the 2007 International Achievement
Summit in Washington, D.C.
(Image: Academy of Achievement)

Archbishop Emeritus Desmond Tutu is once again the recipient of a prestigious international award. Tutu was awarded a United Nations Millennium Development Goals lifetime achievement award for his services to humanity.

Guests and honorees gathered in the General Assembly hall at the United Nations headquarters in New York on 17 March 2009 for the global launch of the awards programme. Millions more viewers around the world were able to watch the event via a live webcast.

The inaugural Millennium Development Goals (MDG) Awards ceremony was aimed at highlighting all that the programme has achieved so far, and reminding all those involved of what has yet to be accomplished. Hosts included entertainment veterans Vanessa Redgrave CBE and Armand Assante.

The lifetime work of the former Anglican archbishop of Cape Town, as well as that of Dr Kevin Cahill, was honoured when the pair became the first recipients of the MDG Lifetime Achievement Award. Cahill, prolific author and renowned expert in tropical medicine, is the chief adviser for humanitarian affairs to the president of the General Assembly.

The distinguished physician is also director of the Institute of International Humanitarian Affairs at Fordham University, and the chief medical advisor for counter-terrorism to the New York Police Department, in addition to a host of other titles. Cahill is known for his research in tropical medicine in the Calcutta slums, where he worked alongside Mother Teresa, and he has ventured behind the lines of war zones like Somalia, Beirut, Sudan, and Nicaragua to offer relief aid. Besides his 25 honorary doctorates, Cahill holds many fellowships and awards.

In his acceptance speech Tutu was as outspoken as ever, bitterly criticising governments who spend billions on buying arms, when so many of their own people live in squalor. If these power-hungry countries diverted just a fraction of their arms budgets to humanitarian causes, said the cleric, much suffering could be alleviated.

He also accused the world’s powers of misplaced priorities in the so-called war against terror, fighting the symptoms when the root causes should rather be addressed.

“We will never win a war against terror as long as there are conditions in the world that make people desperate,” said Tutu. That desperation, in many cases, is what drives people to engage in violent conflicts, he added.

The eight Millennium Development Goals are aimed at improving the lives of millions of poor people around the world by tackling poverty in its many forms. Under the MDG programme, issues that impede development, such as unemployment, lack of education, and disease, are to be addressed and resolved. The target date is 2015, by which time poverty around the world should have been halved.

With the catchphrase of “Make it happen”, the MDG initiative is striving for significant change in each of its focus areas. It is twinned with the Humanitad Global Impact Forum, which brings together Nobel laureates, United Nations leaders and other international achievers to work towards an awareness of the global impact of the Millennium Development Goals.

The MDG programme arose out of the 2000 United Nations Millennium Declaration on poverty eradication, which was endorsed by 189 countries. The goals form a blueprint towards achieving the 2015 target.

While much progress has been made, there is still a long way to go. The United Nations has reported that the success of the programme depends to a large extent on whether developed countries will make good on their promises of aid.

The Arch, as Tutu is affectionately known, is also due to receive another humanitarian award, this one bestowed on him by the global organisation known as Humanity’s Team.

Tutu will receive the Spiritual Leadership award at the Colorado-based organisation’s 2009 Oneness summit, which takes place in April at the inspiring Freedom Park in Pretoria. The award is given in recognition of the cleric’s “vision, understanding and building of bridges”.

The landmark event will bring together moral leaders and experts from all around the world to speak on aspects of oneness, especially as expressed in the Southern African concept of ubuntu.

Tutu is an icon of hope far beyond South Africa, said Humanity’s Team director Steve Farrell. “We consider it a great privilege to give this award to this spiritual leader and we are extremely honoured he has agreed to accept it.”

Commenting on the award, Tutu said, “We must recognise our common humanity – that we are all one, that our destinies are bound up in another’s, that I need you for me to be me, and that we complement each other as essential parts of a greater whole.”