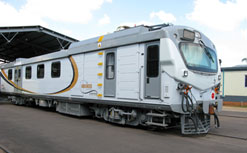 The Tshwane Business Express will cover
the distance between Johannesburg and
Pretoria in one hour.
(Image: Metrorail) 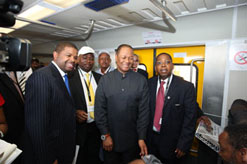 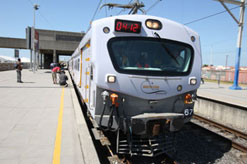 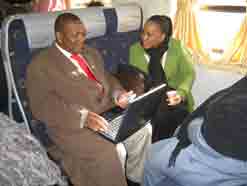 With petrol prices on the rise and freeways getting busier and busier, South African commuters are battling not only with high costs but also with peace of mind. The Tshwane Business Express, a new rail service launched in May 2008, will help to ease the pressure for some.

Taking into account the ever-rising price of petrol and the cost of running and maintaining a car, says the national Department of Transport, it is hoped that young professionals will embrace the new alternative to negotiating the N1 freeway between Pretoria and Johannesburg. This section of the N1 is known as the Ben Schoeman highway and is considered to be Africa’s busiest stretch of road.

Greater use of public transport is one of the most efficient ways to cut congestion on the country’s roads, said Jeff Radebe, South Africa’s Minister of Transport, in his keynote address at the launch. “We can dare to say that we are on track towards providing a lasting, sustainable, efficient and affordable mode of transport to serve our people and the economy at large.”

The Tshwane train accommodates 530 passengers and business commuters can make the most of a range of added services on the train, such as attendants, complimentary refreshments and newspapers on board, laptop workstations, and soon wi-fi, and enhanced security.

In addition to covered parking facilities at all stopping stations, a free bus shuttle service is also available to take passengers to destinations such as OR Tambo International Airport, Johannesburg central, and the nearby business suburbs of Parktown and Rosebank.

At present the train operates only during peak hours in the morning and afternoon, stopping at Centurion and Kempton Park stations before arriving at its destination. However plans are underway to expand the service to off-peak hours. Passengers will pay R750 for a month’s travel in the so-called Zone 2, or business class, while Zone 1, or economy travel, costs R550 a month. A one-way trip costs R30 and R20 respectively.

The Tshwane Business Express is the third such service in South Africa, following on the heels of the Soweto and Khayelitsha business expresses, which were launched in July and November 2007 respectively.

All three services are aimed at the middle-class passenger that, according to the department, is emerging from townships and previously disadvantaged areas. It is hoped that more efficient and accessible services such as these will help to build a culture of using public transport, which in recent years has proved unequal to the task of transporting South African citizens. They have consequently taken to the roads in their millions, boosting car sales and resulting in tremendous traffic congestion.

South Africans on the move

Khayelitsha’s 300-seater express rail service takes commuters from Khayelitsha station to Cape Town station in under 40 minutes, including three stops along the way. Offering the same luxury and convenient facilities as the other two services, the Khayelitsha express train costs R300 per month, R99 per week and R30 and R25 for single and return daily trips.

Like the Tshwane express, the Soweto express train seats 530 commuters in comfort. For R310 per month passengers travel to Johannesburg from Naledi station, stopping at Ikhwezi and Dube stations in Soweto on the way.

Both the Soweto and Tshwane express services will work in tandem with the Gautrain rapid rail link, currently under construction. This service, offering 100 000 daily passenger trips, will cover the distance of 80 km between Pretoria and Johannesburg in 40 minutes and is also intended mainly to ease the congestion on the N1 highway and reduce the number of cars by an expected 20%.

Minister Jeff Radebe, speaking in the National Assembly in July 2007, put the cost of the Gautrain at R25,5-billion but according to senior ANC member Jeremy Cronin, speaking in the same house on a later occasion, the cost could be as high as R35-billion.

The public rail transport system is one of the department’s main focus areas. The R16-billion National Rail Plan, approved by cabinet in 2006, brings together all the regional rail plans under one umbrella and lays out the specific infrastructural and rolling stock interventions required to implement the department’s rail plan strategy.

“Our public transport system needs to remain a lasting legacy long after the last goal is scored in the World Cup final,” said Jeff Radebe at the launch of the Soweto express train. “Our plan is to ensure that by 2010 there is a train available every five minutes during peak hours.”