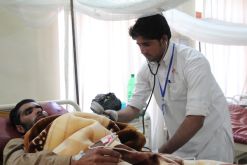 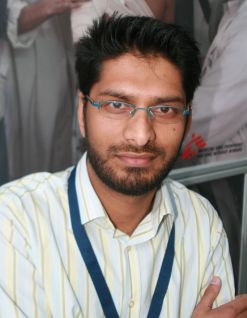 The Sats system was first implemented by
Dr Dalwai, who was working in an emer-
gency room in Timugara Hospital in
Pakistan’s Khyber Pakhtunkhwa province.
(Image: Doctors Without Borders)

The decision by Médecins Sans Frontières (MSF), also known as Doctors Without Borders, is a major vote of confidence in South Africa’s Triage Score (Sats).

“It is something South Africa can be proud of. Taking the system and implementing it across the world is a major accolade for the country,” says South African MSF emergency doctor Mohammed Dalwai.

Triage systems were introduced worldwide to reduce the waiting time for patients who need critical care when they arrive at emergency rooms.

Without the system, patients who seek medical attention in understaffed and overcrowded emergency rooms often can’t get the help they need in time.

“In the emergency room it is all about time and how long a patient has to wait to receive medical attention,” says Dalwai. “If patients are categorised correctly according to the Sats score, it decreases the waiting time for critically ill patients.”

The Sats scoring system was developed with input from medical professionals such as paramedics, doctors, nurses and emergency doctors.

The triage scoring system has been found to improve patient flow in accident and emergency units. It has also lowered mortality rates and improved the delivery of time-critical treatment for patients with life-threatening conditions.

A boost for healthcare

The Sats system was first implemented overseas by Dr Dalwai, who was working in an emergency room in Timugara Hospital in Pakistan’s volatile Khyber Pakhtunkhwa province.

The poorly-resourced hospital had no triage system in place to prioritise critical trauma cases and as a result, many patients were dying in observation wards.

“I wanted to change this situation and this is when I started looking around for triage systems,” he says.

Developing countries such as Brazil, India and South Africa have triage score systems in place, but they are not nationalised.

In South Africa the Sats system is used in public sector hospitals in the Western Cape, and there are efforts underway to implement the system in hospitals across the country.

After researching various emergency room response protocols, Dalwai found South African’s triage system to be most suitable, as it had been widely researched and tested in rural and urban settings around the country.

In Pakistan, it was an ideal solution to the challenge of improving patient survival rates and the functioning of the emergency room.

Dalwai says it is heartening to know that a system developed in South Africa by South Africans is helping people to get the medical attention they need.

“South Africa is at the forefront of so many emergency medicine breakthroughs,” he says.

The South African system is designed to deal with the unique challenges of emergency rooms in developing countries.

There are significant differences between the types of emergency cases in developed and developing countries. In South Africa one-third of all emergency patients suffer trauma, compared to just 8% and 12% in the UK and US respectively.

A larger proportion of patients in the developing world also face delays in reaching an emergency room, which puts them into much higher triage categories.

Following its success in Pakistan, MSF plans to roll out the system in other low-resource, high-burden countries.

MSF is testing Sats in MSF-supported hospitals in Haiti and Afghanistan and it has already been piloted in some district hospitals in Botswana, Malawi and Ghana.

Other countries such as Brazil, Poland and Ireland are also interested in the system, which is practical, user-friendly and accurate.

Because the limited number of doctors and nurses working in understaffed South African hospitals face high case volumes, the Sats system was intentionally designed to be taught to and used by nursing assistants.

This is why it’s so well suited for use in other developing world emergency rooms with limited resources.

“A triage system had never before been used in the Pakistani hospital and the response to its introduction was overwhelming. It shows that Sats can be successfully implemented in other countries,” says Dalwai.