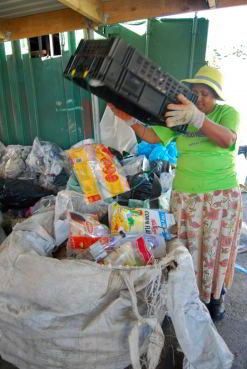 The TrashBack uphinda-phindo! project
gives community members an incentive
to collect rubbish by offering rewards
of food, clothing, and other items.
(Image: TrashBack) 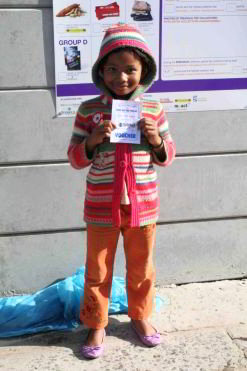 The incentive scheme rewards top waste
collectors from the community for their
collection efforts.
(Image: TrashBack)


A new community recycling initiative in the coastal town of Hout Bay in the Western Cape is changing the way people think about waste management.

The TrashBack uphinda-phindo! project is more than just a waste collection scheme: it gives community members an incentive to collect rubbish by offering rewards of food, clothing, and other items.

Uphinda-phindo! is a Xhosa expression meaning repeated returns or recycling.

The project is the brainchild of three former University of Cape Town students, Nicholas Wiid, Andrew Mcnaught and Terence Goldberg. With the help of corporate sponsors, the project has put a scheme in place to encourage disadvantaged communities to manage their own waste.

The initiative was launched in September 2011 in the Imizamo Yethu informal settlement in Hout Bay, in partnership with local NGO Green Living and the local Hout Bay Recycling depot.

“Through the rewards programme, we are trying to give people a reason to recycle and help people understand the value of recycling for their community,” Wiid says.

He explains that the benefits of the recycling project are threefold. More waste will be recycled and directed away from landfills, residents can take ownership of their living space by beautifying their surroundings, and the project provides both informal and formal employment, contributing to local social upliftment.

Although giving incentives for waste collection is a main feature of the programme, TrashBack is not just about giving handouts.

The project hopes to encourage communities to take pride in their local environment and, in turn, be rewarded for doing this.

“The TrashBack project wants to inspire a bit of competition in the local community,” he says.

The initiative has already achieved great success in the few weeks it has been running.

“The response has been phenomenal. In the first two weeks, over 270 participants got involved and we collected almost two tons of recyclable waste,” Wiid says. Since then, 370 participants have registered with the project.

To be eligible for rewards, participating individuals have to register with TrashBack. “Anyone can do it. We have children as young as four who have been registered by their parents and recently our top collector was 58 years old,” he says.

The incentive scheme rewards top waste collectors from the community for their collection efforts. When community members bring in a set volume of recyclables, they are issued with points that are then registered under their personal profile on the uphinda-phindo! system.

Collectors who have earned rewards are notified by text message to come in and collect their goods.

Rewards include food, clothing, shoes, shopping vouchers, stationery, mobile phone airtime and high school textbooks. “Before the project started we conducted a survey to find out what people would like and these are some of the items that were most popular,” he says.

For the pilot project, TrashBack partnered with local sponsors to provide the incentives for recycling.

A fish and chips shop, Fish on the Rocks sponsored meal vouchers and the Hout Bay SuperSpar provided 25 gift vouchers for the collectors to redeem.

He says that they are also thinking of introducing a lucky draw element to the project in the near future as an additional incentive.

Finding a model that works

Although TrashBack is not the first scheme in South Africa to reward recyclers, Wiid says there is a great need for such projects in the country.

With the benefits of rewards, the project can bring about social change. It has the potential to transform the way people think about recycling in communities across South Africa.

In South Africa and other parts of the world there are many similar projects to promote waste collection for recycling.

“In Brazil, the government subsidises discounted bus tickets for collection of waste. The other great thing about such projects is that collecting points also teaches people about saving,” he says.

The pilot phase of initiative will run for the next six months and in this time the founding team will tweak the project model to ensure that it is sustainable.

“Once we have a model that works, we want to take it to potential funders, government departments and potential sponsors to roll out the concept in other parts of Cape Town and the country,” he says.