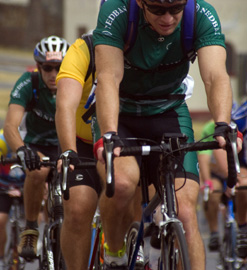 The Cape Argus Pick n Pay Cycle Tour
may take riders through some of South
Africa’s most spectacular scenery, but it’s
still 100 kilometres of hard work. 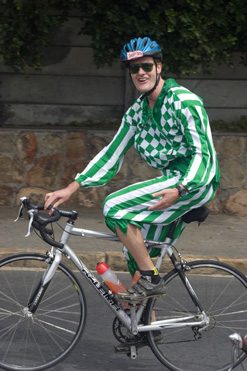 The race brings out many cyclists’ inner
clown. 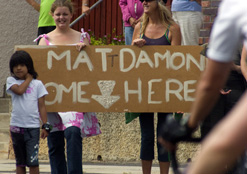 Hollywood actor Matt Damon’s
participation in the 2009 race lured many
hopefuls out onto the streets of Cape
Town. 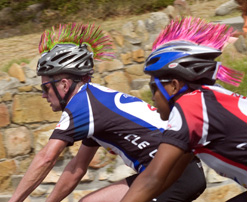 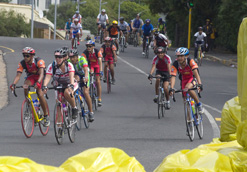 After successfully negotiating the worst of
the Boyes Drive descent, these cyclists
head towards the bright yellow-covered
hay bales at the bottom of Clairvaux Road
and a sharp right turn into the Main Road. 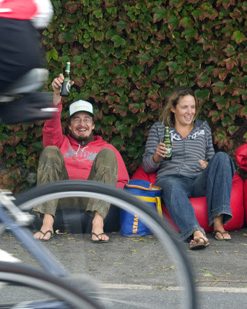 The Argus is as much about the spectators
as the cyclists. These Clovelly locals made
themselves comfortable on the pavement
outside their house.
(Images: Jennifer Stern)

The 32nd annual Cape Argus Pick n Pay Cycle Tour, held in Cape Town on 8 March 2009, had some 25 600 cyclists pedalling the roads of the Cape Peninsula and tens of thousands of spectators lining the route to cheer on friends and strangers. The world’s largest individually timed cycling event, it’s a circuit of over 100 spectacularly scenic kilometres, and a celebration of sport, community and place with a history going back over more than three decades.

The 2009 tour was, according to David Bellairs, co-director of the Cape Town Cycle Tour Trust that organises the event, “without a doubt the toughest Cycle Tour ever. Never before have we experienced such gale force winds during a race.”

Although 35 000 cyclists entered this year’s race, conditions were such that only 25 600 actually took part. Winds of up to 60 kilometres an hour blew down tents and caused a number of injuries – mostly broken collar bones, arms and legs, luckily none of them too serious.

There have been other years that offered an equally tough challenge. In 1987 freezing rain and wind had a number of cyclists opting out, and in 2002 the race was officially stopped because temperatures of up to 42°C made it unsafe. This year, the start was delayed because of the strong wind and – towards the end of the day – people were literally being blown off their bicycles, so the organisers called a halt.

One of the race’s most famous stretches, both dreaded and loved by cyclists, is Chapman’s Peak Drive. This long, steep and beautiful coastal drive is a test of mind and muscle, and most of the leisure cyclists are extremely grateful for the granny gear on their mountain bikes.

But the road has been closed to traffic for quite a few months because of the risk of rock falls after heavy rains last year. It was a big decision but, after careful consultation, the drive was declared safe and the traditional route could be followed. Well, almost.

The Main Road between Muizenberg and Kalk Bay on the False Bay Coast is undergoing extensive rebuilding and so it was likely that the single lane would cause a severe bottleneck and, more seriously, the uneven road surface could be dangerous. So the cyclists had to take a short detour over Boyes Drive. This only added a kilometre to the race, but it did include a long, uphill slog and a scary, twisting and steep descent.

Recognising the extreme nature of the final little downhill chicane on Boyes Drive, the organisers brought in loads of hay bales, put up warning signs and stationed marshals with loud hailers exhorting cyclists to slow down. It worked. There were a few minor tumbles, but nothing like the potential carnage that cyclist and organisers alike were dreading.

A beginning in protest

The Argus started off more as a protest than a race. In1977 two keen cyclists, John Stegmann and Bill Mylrea, fed up with the lack of cycling infrastructure in Cape Town, decided to do a long race around the peninsula. It was part of a plan to popularise the sport and get support for the construction of safe cycle lanes and routes throughout the city.

It was a great idea, but not particularly successful. A few bicycle lanes appeared over the next few years, but it was pretty ad hoc and remained a small isolated feature of the city’s streets. Fortunately, this is in the process of changing. In March 2006 the signing of the Cape Town Declaration led to the formation of the Non Motorised Transport Forum, which is now managed by the Cape Town City Council.

But that first race, which was run on Saturday 26 October 1978, was the start of big things. Originally, Stegman and Mylrea intended to call it the Peninsula Marathon but, realising they needed media backing, they offered naming rights to – at that stage – a rather reluctant Cape Argus newspaper.

So the race started off as the Argus Cycle Tour, and soon became simply “The Argus”. This remains its popular name, although today supermarket chain Pick n Pay is the main sponsor.

That first race saw 585 hopefuls lined up at the start, of whom 446 finished in the cut-off time, then set at eight-and-a-half hours. It seems like a long time, but cyclists had to weave through normal Saturday morning traffic. The following year it moved to the now familiar March slot and, in 1990, it was moved to a Sunday as it was getting far too big for a Saturday. By 1997, with over 28 000 participants, it was clear that competitors and cars could not coexist and the route was closed to traffic for the morning.

There are many reasons for the immense popularity of this iconic race. First, the scenery is simply gobsmackingly gorgeous. But it’s also the vibe. It’s one of the few races in the world where recreational cyclists can ride in the same event as serious professional competitors – albeit at different times.

In fact, most of the serious cyclists are finished and showered and starting on breakfast before many of the “fish and chips” at the back have even got on their bikes. In 1992 it got even more serious with the inauguration of the prestigious Giro del Capo or “Tour of the Cape”, an event made up of four one-day races of which the Cycle Tour is the last leg.

Although for most the entrants it’s really all about taking part – and finishing – the serious cyclists are fiercely competitive. This year, the first man home was  Arran Brown (Medscheme), shortly followed by Robbie Hunter (Barloworld) and Nolan Hoffman (Neotel), all within a split second of each other in a time of  02:46:32. Jennie Stenerhag (Alpha Pharm) led the women’s pack in a time of 03:06:01, with Anriette Schoeman (Nashua Telecoms) and Marissa van der Merwe hot on her wheels.

While these serious athletes whizz along the route early in the morning in a dazzling blur of colourful lycra, it’s the slower, more relaxed entrants that really embody the character of the Argus. And there are always the weirdos – the people dressed as rhinos, Superman or fairies. Cyclists in lycra shorts and a dress shirt with a bow tie are not uncommon, and even one intrepid Braveheart lookalike has been seen pedalling the route in a kilt – hopefully wearing far more underneath than is traditional.

This year there was much excitement with Hollywood actor Matt Damon and his younger brother Kyle taking part in – and finishing – the race on a tandem bike. Damon is in South Africa to film the new Clint Eastwood movie about South Africa’s win in the 1995 Rugby World Cup.

And then, of course, there are the spectators. Cape Town makes a day of the Argus. Those lucky enough to live on the route set up camp in their front gardens, on their verandas, or on the pavement outside their houses. Deck chairs, umbrellas, picnics, bottles of bubbly and various forms of music all add to the festival air.

It is a bit of a mixed blessing as most of them can’t go anywhere until after midday, but it’s only one day a year. And a few thousand travel in from adjacent suburbs to line the route.