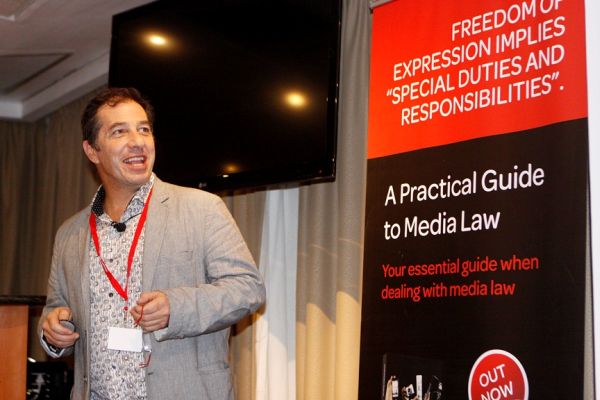 “The freedom to criticize is a right worth defending” Jonathan Shapiro at the launch of the handbook. (Image: LexisNexis)

Charles Dickens wrote those words in Oliver Twist in 1838. Not much has changed; experience is the only way the law is tested or changed.

One of the most vibrant aspects of law in South Africa over the past 20 years has been the practice of media law. With the dawn of democracy the country’s constitution was rewritten, including sections pertaining to media law. For journalists and editors the most up-to-date legal guide was the venerated Newspaperman’s Guide to the Law , last updated in 1990. But on Tuesday, 4 March, publisher LexisNexis released the new Practical Guide to Media Law .

Written by Webber Wentzel partners and media law experts, Dario Milo and Pamela Stein, the new LexisNexis Practical Guide to Media Law is a guide to how media law is practised in South Africa. Written in simple English and using cases the authors are familiar with, the handbook is an easy-to-use guide for media professionals.

Keynote speaker at the launch was Jonathan Shapiro – better known as satirical cartoonist Zapiro – whose experience of testing “what is legally acceptable” goes back to 1998. In all his brushes with the courts his attorneys have been Milo and Stein. Praising their talent, which has “kept me from the poorhouse” he said, “I have always seen it as my job to push the envelope as far as I can and it’s always been theirs to hold me just behind the line.”

The cartoonist remembered the early days of the country’s new democracy as being “like the Wild West”; what was acceptable was still up in the air. He reminded the audience that even while a new constitution was being negotiated the media was operating under legislation guided by the infamous Internal Security Act. “As apartheid legislation was being dismantled it opened up the media space because the rules were in flux.”

The Newspaperman’s Guide to the Law was the perfect handbook for a dark time in South Africa’s history, Stein said when the authors took questions from the audience; however it was time for something to replace it. Agreeing with his colleague, Milo explained that changes in the law happened incrementally and only when the limits of legislation were tested. “The cases we chose as examples were the ones that pushed constitutional limits, but it is a book that can be read as celebrating the vibrancy of our democracy.”

Melissa Moore from non-governmental organisation section 16, which provided funding for the handbook, celebrated the rich jurisprudence of the country before signalling a warning, saying all governments would rather hide information than share it with their citizens, which is why the media plays such an important role in a democratic society. “In a democracy as young as ours, a strong free press has a vital role to play. Besides being a tool for the press it is a reminder of its obligations to provide truth, information and news.”

Section 16 advocates for law reform in the areas of freedom of expression and access to information.

Shapiro joked earlier in the evening that the book was a tool, but that nothing “beat having a good attorney in your corner” and none were better than the authors of the handbook. He is a friend of artist Brett Murray – best known for his painting The Spear – who sought his advice when he was sued by the African National Congress. Shapiro said, “My first question was ‘Who is your lawyer?’ Once I heard Dario’s name I told him to relax; it was all taken care of. My point, if you are going to put together a handbook on media law, then get the best.”

The LexisNexis Practical Guide to Media Law is available online and at bookstores for around R513.