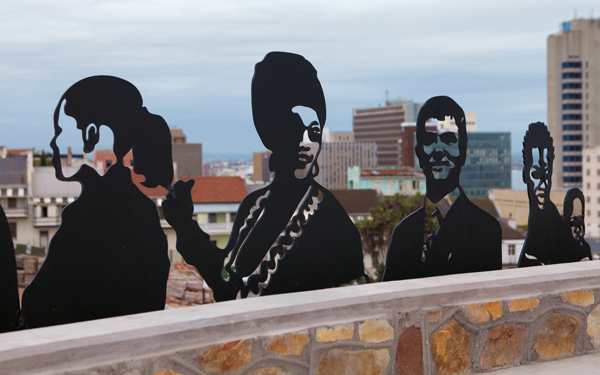 A sculpture in Port Elizabeth commemorating the long queues of South Africans, of all colours, who waited together to vote in the country’s first democratic elections of 1994. (Image: Brand South Africa)

South Africa is a nation of diversity, with nearly 52-million people and a wide variety of cultures, languages and religious beliefs.

Africans are in the majority, making up 79.2% of the population. Coloured and white people each make up 8.9%, the Indian/Asian population 2.5%, and “other” population groups 0.5% of the total.

Gauteng, South Africa’s economic powerhouse, is the most populous of the country’s provinces, although it is by far the smallest geographically. Some 12.3-million people live in the province, or 23.7% of the total.

Although the Northern Cape is the largest province, at almost a third of South Africa’s land area, it is an arid region with the smallest population – only 1.15-million people, or 2.2% of the total.

Gauteng’s population grew by 31% to 12.8-million people by 2011, up from 9.4-million a decade ago. Around 1-million people have moved to Gauteng in the past decade, highlighting the flow of people from rural to urban areas. Only 56% of people living in Gauteng today were born there.

The African population is made up of four broad groupings:

“Coloured” South Africans (the label is contentious) are a people of mixed lineage descended from slaves brought to the country from various colonial properties in the east, as well as elsewhere in Africa, the indigenous Khoisan who lived in the Cape at the time, indigenous Africans and whites. The majority speak Afrikaans.

Khoisan is a term used to describe two separate groups, physically similar in being light-skinned and small in stature. The Khoi, who were called Hottentots by the Europeans, were pastoralists and were effectively annihilated; the San, called Bushmen by the Europeans, were hunter-gatherers. A small San population still lives in South Africa.

The majority of South Africa’s Asian population is Indian in origin, many of them descended from indentured workers brought to work on the sugar plantations of what was then Natal in the 19th century. They are largely English-speaking, although many also retain the languages of their origins. There is also a significant group of Chinese South Africans, and a new wave of immigrant Chinese.

Besides the official languages, scores of others – African, European, Asian and more – are spoken in South Africa, as the country lies at the crossroads of southern Africa.

According to the 2011 census, isiZulu is the most common home language is, spoken by just over 20% of the population. It is followed by isiXhosa at 16%, Afrikaans at 13.5%. and English and Setswana each at 8.2%.

The number of people who speak English as a first language has increased by more than 1-million, to 4.9-million people, or 9.6% of the population.

*Spoken as a home language.

Most South Africans are multilingual, able to speak more than one language. English- and Afrikaans-speaking people tend not to have much ability in indigenous languages, but are fairly fluent in each other’s language. A large number of South Africans speak English, which is ubiquitous in official and commercial public life. The country’s other lingua franca is isiZulu.

A period of mourning struggle heroes has fallen – Zola Skweyiya