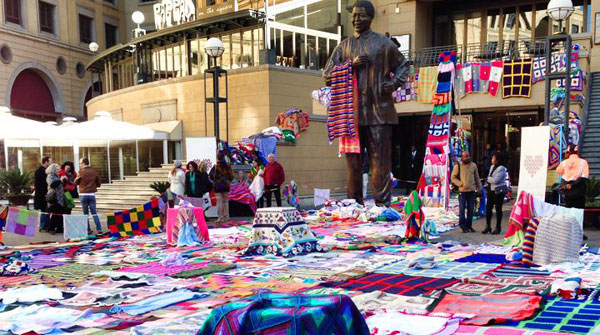 Steyn says she never dreamed there would be such a good response. “It started out with me wanting to make a difference with my own two hands and it has transformed into something much, much bigger. This campaign reminds me of something Madiba once said: ‘We must use time creatively, and forever realise that the time is always ripe to do right.’ I guess that this is also testament to what I like to call Madiba Magic.” (Image: 67 Blankets)

A patron of the arts who once could be seen on our television screens in Melrose Place, Carolyn Steyn is now playing her part for South Africa and encouraging others to do the same with her “67 Blankets for Nelson Mandela Day” initiative.

It all began when Mandela’s former personal assistant, Zelda la Grange, issued a challenge to Steyn last year. “In December, she presented me with a challenge to knit 67 blankets by 18 July for Mandela Day. These blankets would then be distributed to those in need,” Steyn says.

It may have started as a challenge, but it has quickly grown into what some are calling a movement. “I gladly accepted [La Grange’s] challenge, but soon realised that I wouldn’t be able to achieve it alone. I then called on my friends for help and developed the 67 Blankets for Nelson Mandela Day Facebook page.”

The Facebook page got up and running, friends shared it with friends; more people liked the page and more people signed on to make a blanket. That was in December; by the end of May the page had nearly 1 700 members around the world. It’s testament to the reach of the man himself, the power of the internet, and the goodwill of humans.

It’s captured the attention of thousands of South Africans as well as corporates and hundreds of people in the UK, Australia, New Zealand, Canada, Germany, Cyprus, London, the US and India.

Joining is easy. The only requirement is that the single bed-sized blanket or baby blanket has to be handmade – bought blankets will not be accepted. Blankets can be knitted or crocheted and should measure 150cm x 200cm. “You can decide on your own size squares, your own colour – but preferably a darker colour so as not to show up dirt too easily.”

And those who pledge to make a blanket must keep their promise and complete the blanket or blankets by 1 July. Drop-off points for the blankets as well as the charity beneficiaries will be announced closer to the time on the campaign’s Facebook page.

La Grange’s Bikers for Mandela Day group will hand deliver the blankets to the most rural and underprivileged people across the country.

Steyn says she never dreamed there would be such a good response. “It started out with me wanting to make a difference with my own two hands and it has transformed into something much, much bigger. This campaign reminds me of something Madiba once said: ‘We must use time creatively, and forever realise that the time is always ripe to do right.’ I guess that this is also testament to what I like to call Madiba Magic.”

The Facebook page now has over a thousand members, she adds, and most have pledged to knit blankets. Hundreds have already been received in handovers in Johannesburg and on Robben Island. “Knitting has become the new yoga.”

Those taking part in 67 Blankets are calling themselves “knit wits”. Some are knitting and crocheting for the first time, going by the motto, “Stitch by stitch we can make a difference and help keep people warm this winter.”

The blankets will be distributed on International Nelson Mandela Day, on 18 July. The initiative is supported by the Department of Arts and Culture and has captured the attention of thousands of South Africans as well as corporates and foreigners. More people come on board daily. “Madiba had the ability to inspire the masses for the greater good of humankind and this is his legacy.”

A far cry from Hollywood

Born on 17 May 1960 in Johannesburg, Steyn completed a Bachelor of Arts Honours in 1981. She lived in the United States for 10 years and in England for five, and was nominated as one of the “Most Exciting Women” by the Beverly Hills Sheet in 2004.

In the US she studied at the Beverly Hills Playhouse under acting coach Milton Katselas; fellow students included Kate Hudson, Giovanni Ribisi, Jeffrey Tambor, Tony Danza and Doris Roberts, among others. She had roles in the television series Melrose Place and Babylon 5, and appeared in numerous plays in Los Angeles, such as Harold Pinter’s Betrayal, Private Lives, and Shadowlands.

In South Africa, Steyn performed for Pact Drama for several years, notably in the production Poppie Nongena, which ran for an entire year. She was on the Radio 5 team (5FM), where she became a familiar voice reading the news and co-hosting the weekend breakfast show with Martin Locke.

At present, she co-hosts a Radio Today show called Whispers with Carolyn Steyn and Michael de Pinna and is a patron of the Joburg Ballet and the Auto & General Theatre on the Square in Sandton, Johannesburg. She is also a Naledi Theatre Awards judge and an Arts Angel.