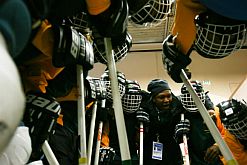 Team SA gets a last-minute pep talk from
coach Ephraim Mohlakane before taking
on their next opponent.
(Image: Universal Sports) 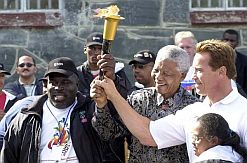 Former President Nelson Mandela and SO
Global Ambassador Arnold Schwarzenegger
light the Flame Of Hope on Robben Island
in 2001. 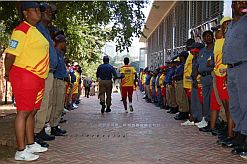 The Flame of Hope leaves the Constitutional
Court in Johannesburg, borne by athlete
Bambino Phahlamohlaka. 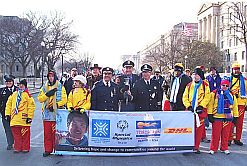 During US President Barack Obama’s
inauguration ceremony in January 2009,
the Flame of Hope was carried down
Pennsylvania Avenue during the parade.

The first ever Team South Africa at the Special Olympics World Winter Games has done the country proud, taking gold for floor hockey at the 2009 event. The 14-member squad, all from Limpopo province, were complete novices at the game eight months ago and had to learn the sport within a few months, making their victory twice as sweet.

The Special Olympics (SO) for athletes with intellectual disabilities holds summer and winter games on a four-yearly basis, just like the Olympic and Paralympic Games. This year’s SO World Winter Games took place during the second week of February in Idaho, US, with almost 2 500 athletes from over 100 countries vying for top honours.

There are only seven categories of sports in the World Winter Games – alpine and cross-country skiing, figure skating, snowboarding, snowshoeing, speed skating, and floor hockey, which is an adaptation of ice hockey.

For their first ever Winter Games, Team SA took part in only the floor hockey event. However, during the Summer Games in 2007 in China, the 86-member squad participated fully and brought back three medals.

Over the six days of the hockey competition Team SA lost only two games in their division; in the finals they handed their opponents Ecuador a 2-0 drubbing.

The Limpopo team were the winners of a lucky draw at home that thrust them into the international limelight. Ranging in age from 17 to 30, they were selected from more than 200 hopefuls who took part in SO South Africa’s National Winter Games held in Pretoria in June 2008. Three days of intense competition culminated in the awards ceremony and the selection, by draw, of the team to represent SO South Africa in Idaho.

Minster of Education Naledi Pandor remarked in her keynote speech at the national event that “Special Olympics is ‘special’ not because of the word ‘special’ in its name, but because it allows us to use sport to transcend views and prejudices that have for many years allowed individuals with an intellectual disability to be neglected by society and sadly by their families.”

The Ministry of Education was committed to supporting the organisation’s programmes in schools in all provinces, added Pandor.

Team SA had to contend with sorely limited facilities during the initial phase of their training. At first they practised in classrooms and furthermore were living far apart at the time, so the coaches had to train them on a rotating basis.

Later the group assembled in Johannesburg to train on an official-sized court and in full competition gear. They also got the chance to train with an experienced local floor hockey team who gave them hints on how to handle high-level competition.

The team travelled to Johannesburg for one weekend every month prior to departure to keep their skills honed. Coach Ephraim Mohlakane commented shortly before leaving for the US that he was “very impressed. I am 100% sure that they will get gold at the Winter Games. There are a few skills that we still need to work on, but they will be perfect by the time they leave.”

The oldest member of Team SA, 30-year-old Shavhani Steven Ndou, commented that SO has changed his life because the community respects him more, and that he was very proud to be part of the delegation to the US. Joseph Makhafola, 21, appreciated that there was no nepotism in SO, while 19-year-old Bambino Phahlamohlaka was grateful that he is no longer as lazy as he used to be.

Tearing down the walls of prejudice

The mission of Special Olympics worldwide is to provide year-round training and competition in a variety of Olympic-type sports for children and adults with an intellectual disability. SO gives them the chance to develop physical fitness, demonstrate courage, become productive members of society, and experience acceptance, respect and pride.

The South African chapter was founded in 1991, although SO has been active in Africa since 1979 when the first office opened in Kenya. But the organisation’s activities remained low-key until the Special Olympics African Hope event took place in 2001 at venues around the country, starting in Cape Town.

Former President Nelson Mandela and SO Global Ambassador Arnold Schwarzenegger lit the Flame of Hope on Robben Island, surrounded by a throng of athletes. Subsequent soccer and golf tournaments and other gala events at Sun City in the North West province and in Johannesburg did much to generate awareness of the organisation not only at home but throughout the continent.

“We need to tear down the walls of prejudice and ignorance,” said Schwarzenegger at the Robben Island event, “so that Special Olympics can grow into as large an organisation on the African continent that it is in the United States and throughout the world.”

Since then SO has seen rapid, even unprecedented, growth in Africa. South Africa currently has 17 658 registered Special Olympics athletes, and the local chapter aims to recruit, train and offer competition opportunities to almost 28 000 athletes and to recruit and train 1 400 coaches by 2010.

As part of its strategic plan to expand its programme and attract more athletes, SO commissioned a survey in 2004 to determine the attitude of the South African public towards the organisation, and towards disabled people in general.

The survey was conducted by a research team from the University of Massachusetts Boston. It established that while the past decade has seen the country making great efforts in recognising the rights of all its citizens, including those with disabilities, there is still work to be done.

The most significant finding was that at the time 65% of those questioned had no awareness of SO. Of those who did had heard of SO, an encouraging 69% accurately reported that SO serves people with intellectual disabilities, while more than half of this particular segment also expressed an interest in volunteering at an event in their area. However, a significant 31% believed, wrongly, that the organisation serves people with physical or sensorial disabilities.

The full report is available on the website of the Special Olympics organisation.

The Flame of Hope

The Flame of Hope is the symbol of the Special Olympics. It was lit in Athens, Greece, on 12 November 2008 and crossed five continents during its 60 000km journey, arriving in Coeur d’Alene, Idaho, on 29 January 2009. The flame landed in South Africa in the third week of November 2008, to stay for two weeks.

Officials had to wade through much red tape to obtain special permission to take the burning flame on board a plane. The actual transportation was not a problem – a miner’s lamp became the flame’s temporary home when it was carried in confined spaces such as aircraft.

The flame was the focus of a number of ceremonies held on 7 December 2008 at the Constitutional Court, in Soweto, and at the Botanical Gardens in Emmarentia, Johannesburg. Exactly two months later the cauldron in the Idaho Centre in Nampa, Idaho, blazed into life during the opening ceremony.

But before this the Flame of Hope stopped over in Washington, D.C., where it was carried by proud athletes and law enforcement officers down Pennsylvania Avenue during the inauguration ceremony of US President Barack Obama.