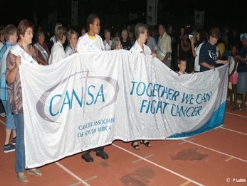 Breast and cervical cancers, according to the Health Department, are a growing concern among women; men are mostly affected by lung cancer, followed by prostate and throat cancers.
(Image: CANSA)

A cancer advisory committee, set up by Health Minister Aaron Motsoaledi, will tackle all matters relating to the prevention and control of cancer.

The Department of Health explained that the primary function of the Ministerial Advisory Committee on the Prevention and Control of Cancer would be to benefit the state to plan all-inclusive, preventive services; it would also benefit patients and their families by meeting their needs for quality care. There are eight inaugural members.

Cancer is a major killer, both in the developed and the developing worlds; South Africa is not spared. According to the Health Department spokesperson, Popo Maja, the decision taken to establish the committee was a result of the growing number of cancer cases in South Africa. Maja said while cancer accounted for 7% of all deaths in South Africa in 2012, the information available on it was inadequate.

Although there are other organisations that educate people on cancer, such as the Cancer Association of South Africa (Cansa), Childhood Cancer Foundation (Choc) and People Living with Cancer (PLWC), there is a dire need for an assessment of all available cancer data. South Africa’s official cancer data is irregular at present as cases are only reported voluntarily.

The health minister set up a National Cancer Registry in 1986 to facilitate the compulsory registration of all cancer cases. However, it proved ineffective and the registry was last updated in 2004. “Our information is quite outdated and that worries us,” Maja said.

The team will educate the public about cancer and how to detect it early. Breast and cervical cancers, according to the Health Department, are a growing concern among women. Men are mostly affected by lung cancer, followed by prostate and throat cancers.

Maja said one of the committee’s tasks would be to strengthen research to find ways to make a cervical cancer vaccine affordable to disadvantaged communities.

In a 2011 review on NCDs, the South African Medical Research Council (SAMRC) reported that NCDs caused a quarter of deaths in South Africa. Globally, deaths caused by NCDs were projected to increase by 17% over the next 10 years, but the greatest increase – of 24% – was expected in Africa. It was also estimated that NCDs would contribute to 75% of global deaths by 2030.

“Inadequate knowledge about how environmental and behavioural factors are causing NCDs among much of the population also allows NCDs to grow at unprecedented rates,” Motsoaledi said.

NCDs can often be prevented through lifestyle changes, but the minister said poverty contributed to an increase in such illnesses because in poorer communities there was limited access to information on lifestyle changes. “We cannot expect people to behave in healthy ways unless they know what is healthy and what is not,” he added.

He explained that the committee would work with society and communities to try to look for the best ways to do that.

The advisory committee comprises a diverse group of cancer experts. “Setting up the team was a real affirmation of the minister’s focus to make quality health care accessible to all South Africans,” said committee member Kwanele Asante-Shongwe, who runs an advocacy group for breast cancer called BreastSens.

Another committee member, Raymond Abratt, the head of radiation oncology at Groote Schuur Hospital and the University of Cape Town, said that in the past there had been a great emphasis on infectious diseases such as HIV/Aids. Now, South Africa needed to give more attention to NCDs like cancer.

The other six inaugural committee members are Professor Vikash Sewram, the head of the oncology research unit at the SAMRC; Dr Jennifer Moodley, the senior public health specialist in the Western Cape health department and a senior researcher in the University of Cape Town’s Women’s Health Research Unit in the School of Public Health and Family Medicine; Professor Paul Ruff, the head of medical oncology at Charlotte Maxeke Academic Hospital in Johannesburg; Dr Christina Stefan, a paediatric oncologist at Stellenbosch University; Sue Janse van Rensburg, the chief executive of Cansa; and Nontuthuzelo Somdyala, a scientist from the Burden of Disease Research Unit at the SAMRC.