Students of the Cape Peninsula University of Technology were given a task to share stories of their community, in order for them to identify with one another. These stories capture the challenges they have overcome and aims to shape them as aspiring teachers. 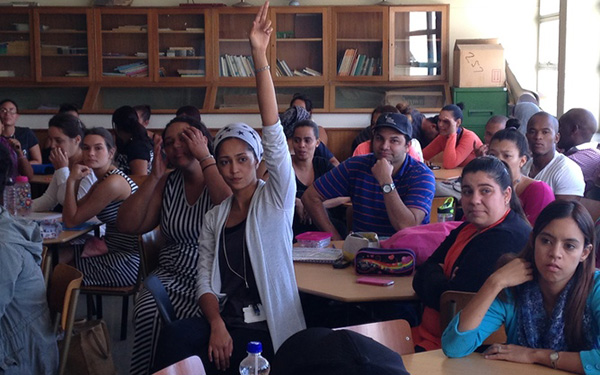 A Professor and her colleague initiated a digital stories campaign so that trainee teachers could learner from each others’ lives and understand their learners’. (Image: Janet Condy via The Conversation)

Five years ago, some 16 years since the end of apartheid rule in South Africa, I noticed that final year pre-service teachers in the faculty of education rarely mixed across racial lines. They avoided talking, integrating and working with each other.

My institution, the Cape Peninsula University of Technology, attracts students from all of South Africa’s race groups. Once they graduate, our teachers work in schools that cater for all of these groups. But, nearly two decades since the country became a constitutional democracy, the “born-frees” seemed to be perpetuating the very racial divisions the anti-apartheid struggle had fought against.

I wondered if we could find ways to connect across these divisions. Working with my colleague Daniela Gachago, the Digital Storytelling project was born in 2010.

Last year one of our faculty’s alumni shared an experience from the classroom that proved how valuable the project can be. Committed to giving back to the community, he’d chosen a school in a poor area for his first teaching post. There was a rubbish dump next door and through his classroom window he could see people scratching through the trash. He was surprised one day when one pupil, a little girl who’d been adopted, said:

“Sir, you see that lady digging in the rubbish dump? She’s my mother!”

The teacher understood immediately how important it was to listen to what this little girl had to say; that while her story of growing up in poverty might not be particularly unusual in the bigger picture, it was at the same time utterly unique to her – and it mattered. His response, and his willingness to hear her story, mattered just as much.

At the beginning of 2015 our fourth-year education students created 76 stories. Students were provided with the skills and expertise to make a digital story about a social issue close to their hearts. They were divided into small groups, each with a peer facilitator – students from their own class who had undergone additional training.

How the project worked

We used participatory learning activities, like having students engage in “story circles”, to help develop the trust needed to share the stories close to their hearts. We also employed a “pedagogy of discomfort” to challenge students to tell the stories that really mattered to them. The stories are all fewer than 500 words long; a brevity which makes them very powerful and which is amplified by the way they’re crafted with visuals and audio.

Once made, stories were presented to other students, family and friends at a show day. Some students have given us permission to share their stories on Youtube.

Watch the playlist videos of the students’ digital stories here:

Lessons learned from this experience

After the public show day the students and I reflected on this six-week process. I got their permission to record this session and, drawing from their own words, I grouped some of their more significant comments into five themes:

“When you look [at] someone like a coloured or a white person, you think that he or she doesn’t face the problems that you’re dealing with. And now we realise that we all have problems. Then we have to respect each other for that.”

“Our overall topic [was] ‘what does it mean to be human?’. We’re all human… we all have our issues… so it makes us human.”

“I speak to people that I’ve never spoken to before. It’s actually opened me up a bit more… I have an emotional connection to them because… I related heavily to what they said … they will always be held in some form of amazement.”

“My father died this morning… I could have stayed at home, cried or … but I wanted to be here because… it’s nicer to be here than to be alone.”

“This friend of mine, she will… say “I don’t like that person”. Then I would say, “Let’s move towards our bias”. It’s working because we get to know other people and we try to understand why the people are like that.”

“I’m more into the whole single story. So when… people say things… maybe look at it from another perspective, from another side and not just be focused in your own little…”

“Just because we are from different backgrounds doesn’t mean that we don’t go through the same things… but these stories, you know, they’re common and we’re not actually that different.”

The teachers of the future

We all have stories: stories of hope and joy as well as those of pain and despair. These speak to ways in which our common humanity is divided by race and class, as well as by gender and other forms of social inequality. I believe that if we can find ways to share our stories perhaps we can find ways to rediscover ourselves and others as “being human”.

Protests and debates at South African universities in recent weeks underscore just how crucial it is for students to feel heard, understood and valued in academic spaces and beyond.

We hope that by sharing their stories our students – the teachers of tomorrow – will be better able to help their own pupils connect across racial divides and be more human.

Janet Condy is an Associate Professor in Education at Cape Peninsula University of Technology.

She receives funding from the National Research Foundation, Stellenbosch Institute of Advanced Study as well as her own institution, the Cape Peninsula University of Technology.

This story was originally published on The Conversaton’s webpage.