Acre Road in Kensington, with its unused
spaces, will soon become a safe
gathering place for the community. 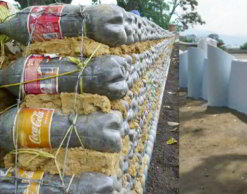 Building with recycled materials such as
discarded colddrink bottles, the Acre
Road project will help the environment
and create employment.
(Images: Design Indaba)

The Design Indaba, a yearly event showcasing the best and the latest in home-grown, high-end South African design, has come up with an innovative concept to bring the concept to street level.

The Your Street Challenge recently took place in Cape Town, with some surprising and innovative results. A similar event is currently underway in Gauteng province.

The Your Street Gauteng Challenge concludes at the end of January 2012.

In the Cape Town competition, the design for Acre Road in the underprivileged suburb of Kensington was chosen as the overall winner.

Acre Road holds little charm at the moment. It is a suburban street like any other in the poorer areas of Cape Town – devoid of aesthetic elements, overrun with litter. It is barely cheered by the patches of pock-marked grass and colourful washing strung on broken poles.

Yet, Acre Road’s inhabitants often take to their street, to play a game of friendly soccer, to catch up on news with friends, or just to take an easy stroll.

It is this aspect which first caught sustainability expert Lorena Pasquini’s attention on her way to drop off her friend Caitlynne Francis, who lives in Kensington.

“The first time I came here, I wondered why the community used the streets for socialising, especially the youth, when all around the community are vacant strips of municipal land, covered only in trash and rubble.”

Pasquini and her friends Francis, Mark Henning and Hannah Williams entered for Your Street Cape Town and won the R100 000 (US$12 490) first prize. Their winning street design will create recreational spaces for Acre Road and its neighbouring community, using low-cost recycled materials and labour from the area.

The proposal considered the activities currently taking place in the area that could be improved and that would bring about a positive change in the lives of the community.

A preliminary investigation showed that the street was actively used for a number of activities, from socialising and playing football, to hanging washing and small-scale informal trade.

“There is no existing infrastructure to support these activities: children play football in the street, people sit on rubble or on the pavement to socialise, and washing is hung by stringing wire between old fence posts and lampposts,” the proposal noted.

The completed design will include a six-a-side football field with a bench-like structure for seating made from two-litre colddrink bottles. This will also function as a natural safety barrier between the field and the road, and will have an open air dance floor/performance space alongside it.

The structures can also be used for useful community information, graffiti and as a space for local artists to express themselves.

“We are already implementing the project. The first steps are to secure permission to use the land from either the City of Cape Town or TransNet, and thereafter to get a graffiti permit from city management. Once those two steps have been achieved, we can proceed with everything else,” said Pasquini.

The competition received about 100 entries and called upon designers to come up with plans to beautify a street they live in, or one that catches their attention.

The brief was simple yet appealing: how an aspect of your city’s street life can be enhanced through the power of design. This could be anything from coming up with a creative way to rid a street of potholes to a crime prevention solution.

Proposals were judged on six cornerstones of design for social change: generosity (how many people will benefit from it); international excellence and innovation; feasibility; fun; achievability; and creativity.

The challenge also formed part of Cape Town’s celebrations in being short-listed for World Design Capital 2014, a title which was subsequently awarded to the city.

One of three runners-up, “Violet’s walk” by Luke Pedersen, Jenny Pedersen, Kirsty Rielly, Jess Pedersen and Katherine Spindler is another example of using innovative design principles to bring about positive social change at street level. The team will receive R50 000 ($6 242) to initiate its proposal.

The proposed walking route around the Fairview Avenue and park area in Woodstock, a suburb in the city bowl, will be demarcated with resting benches and information plaques placed strategically along the way. With the project, the five friends hope to encourage relationships within the community as a means to fight fear and crime in the area.

“We are a group of friends living in and around Woodstock who are invested in the development and safety of the area,” they said in their proposal. “Some of us live, work and play in the area and have done so for the past seven years. One of the best things about living in Woodstock is the diverse variety of friendships which span age, culture and religion.”

The name of the project follows from a chance meeting with one of the inhabitants who takes a daily walk in the area. Violet George, or Ma George as she is fondly known, happened to be walking past on the day the five were out and about, planning their project. She shared with them her thoughts on the area and the general safety of Woodstock.

“Unlike her peers, many of whom do not walk in the area because they feel unsafe and because they have nowhere to rest, Ma George walks certain routes around Woodstock daily and is known by all the residents in the community.”

A community party for all ages will also form part of the project. “This event will be a great opportunity to share our vision for the project while also encouraging residents to venture out of their homes and engage with each other again.”

The two other winning ideas, also recipients of R50 000, were “Urban Mosaic”, for the painting of shacks with a fireproof material, and “Let us Grow”, for creating an urban garden on vacant municipal land. The money awarded for the winning ideas must be used in the implementation of the project.

“We are currently determining timelines but we are looking at implementation by February 2012, so by Design Indaba next year,” said Maciek Dubla, Design Indaba media and marketing manager.