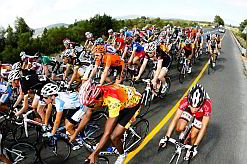 The Institute for Drug Free Sport aims to
uncover manufacturers of illegal steroids
that end up in the hands of some
of South Africa’s athletes.
(Image: Tour of South Africa) 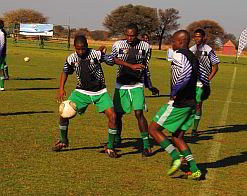 A new task force is set to strike fear into the hearts of manufacturers and traffickers of illegal performance-enhancing drugs allegedly targeting athletes in South Africa.

The South African Institute for Drug Free Sport has announced that it is preparing to launch a new intelligence unit that will investigate syndicates of illegal performance-enhancing drugs.

The unit plans to work closely with South African law enforcers, and is aimed at ensuring that suspected manufacturers of the banned substances are brought to book. Currently it’s only the athletes found to have consumed the stimulants – whether deliberately or unknowingly – that suffer the consequences.

“In 2010 and 2011 we caught a record number of athletes for various doping offences and while these athletes often have to serve bans from sport, the suppliers and dealers evade any sanction or punishment,” said Khalid Galant, CEO of the Institute for Drug Free Sport.

Cutting off the supply

The institute is convinced of the existence of clandestine steroids manufacturers and traffickers in the country.

“Anecdotal evidence and drug arrests both point to the substantial involvement of criminal syndicates who are manufacturing illegal steroids in labs, and trafficking steroids,” Galant said.

“We are determined to go after them and cut off supply.”

As steroids are popular performance-enhancing drugs among athletes, body-builders, nightclub bouncers and celebrity clientele, Galant suspects that the syndicates enjoy high profits from their rampant criminal but yet to be uncovered activities.

“The return on investment is high and risks are considered substantially lower to the syndicates when manufacturing and trafficking steroids, as opposed to smuggling drugs such as cocaine, heroin or manufacturing methamphetamine.”

The new unit will focus on shutting down illegal laboratories, as well as uncovering dubious sales at health clubs and sports supplement stores. Its main aim will be to tackle the banned drugs’ proliferation at its roots, said the institute.

The suppliers are suspected of targeting not only professional athletes but youngsters still in schools as well.

“It is important to protect our athletes, especially those in high school, who in many cases are unknowingly purchasing illegal steroids under the false impression they are taking a permissible sports supplement,” Galant said.

Police bust what they called one of the country’s largest covert drugs laboratories in Cape Town on 19 April. Illegal drugs such as cocaine and mandrax were allegedly produced on the premises.

Two officials from the institute, a doping control manager and a doping control officer, are currently attending an intense training course on anti-doping intelligence systems in Australia.

“Upon their return, we will convene a forum with the Medicines Control Council and the National Detectives Office of Serious Crimes to put together an infrastructure,” said Galant.

The unit will also investigate smuggling of the illegal drugs into the country. Galant said South Africa was in danger of becoming a preferred destination for traffickers.

He said the country was “very vulnerable to the entry of illicit drugs” via its busiest ports, such as Cape Town and Durban. The goods are destined for Africa and other parts of the world.

Galant recommends advanced training for South Africa’s police and customs officials to enable them to differentiate between drugs destined for legitimate pharmaceutical supply chains and those meant for the black market.