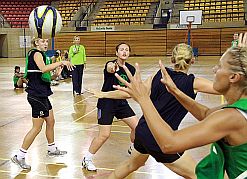 Amantombazane, as the national netball
team is affectionately known, at practice
for the 2011 World Netball Championships
in Singapore.

South African President Jacob Zuma has wished the Spar national netball team, Amantombazane, the best of luck ahead of their departure to Singapore on 21 June 2011 to compete in the World Netball Championships.

Zuma and Minister of Sports Fikile Mbalula gave the team a fitting send-off at Mahlambandlopfu, the presidential guest house, in Pretoria on 19 June.

Amantombazane is the isiZulu name for “girls” and the team was named by Mbalula.

Zuma said: “This meeting here gives us an opportunity to say goodbye and good luck, and for you to receive our blessings. You are our number-one team.”

The president also spoke about South Africa’s enthusiasm to participate competitively in all sporting codes, and the desire to win.

“I have heard that you carry this culture and that in Africa you are number two and in the world number six. This shows that you are a team of quality that is focused. I am happy that you have come (here) and would like you to know that the whole nation is behind you,” said Zuma.

The president promised the team that either he or Mbalula would go to the championships to cheer the team on. The championships, which will run for eight days, start on 3 July. Amantombazane’s first match is against Jamaica on 4 July.

Mbalula, who spoke about the role of sport in uniting the country, said: “Netball has the clearest understanding of transformation, as we can see the rainbow nation sitting here in front of us.

“You have the full support of the president, and it is up to you to represent your country with dignity, discipline and courage.”

The World Netball Championships have been held every four years since 1963. South Africa received honours for coming third in 1967 and second in 1995.

Theresa Prince and Tertia le Roux have been appointed to officiate at this year’s championships as umpire and technical official respectively.

Blanche de la Guerre, the vice-president of Netball South Africa (NSA), said: “We are very proud that Theresa has been appointed to umpire at the world championships.

“It is a great achievement and we know that she is going to do South Africa proud. We are also very proud that Tertia has been selected to serve as one of the tournament statisticians.”

Prince thanked her mentor, Reg Sharp, a member of the national coaching panel and one of South Africa’s leading umpires, and NSA’s director of umpires, Dr Hannette Brewer, for helping her gain international recognition.

Le Roux, who will capture in detail every move in the game, said: “I have done this at a number of tournaments, but this will be at an even higher level. I’m a bit nervous, but very excited.”

Aim of the game

Netball is traditionally a woman’s sporting code played by two teams of seven players each.

The field of play is divided into three sections with each player having responsibility in their section, while the aim of the players is to put the ball through their opponent’s net.

There are seven positions in the field of play. They include: goal shooter, the player who aims for the net; goal attack, a secondary goal shooter; wing attack, a player who passes to the shooters from centre court; the centre, who controls the ball for the team; wing defence, who defends the top goal area; goal defence, who blocks attacks and the goal keeper.