The launch of South Africa’ second National Spelling Bee saw learners and adults compete in an informal round of the contest. It combines fun competition, literacy awareness and a love for reading. 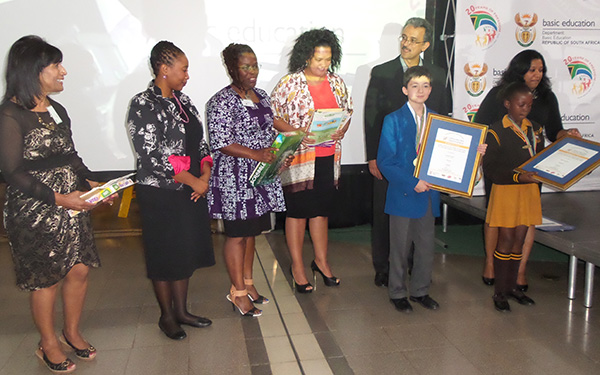 The Department of Education launched the second annual National Spelling Bee contest on Thursday, 16 April, at the Sci-Bono Discovery Centre in Newtown, Johannesburg.

It opened with an informal spelling contest where 12-year-old learner, Angel Hlongwane, triumphed over five other participants that included two grade six learners and three adults.

The Spelling Bee was initiated in 2014 to help intermediate phase learners improve their English literacy levels.

Panyasa Lesufi, MEC for Education in Gauteng said in a press release that the competition was aimed at promoting a love for reading, writing and spelling for learners between grades four and six. “This popular concept has spread from its early roots in the United States 90 years ago to Canada, Nigeria, Ethiopia, East Asia, China and the Caribbean, to our shores. It is a great way to combine fun competition with the very real target of turning around literacy among our youth.”

This year’s Spelling Bee will start in schools this month, followed by the provincial competition in August and the national finals in October.

Last year more than 150 000 learners took part in the contest. For every four schools registered in a district, a spelling coach was trained and assigned. Three of the best spellers from each province were then chosen for the national contest. 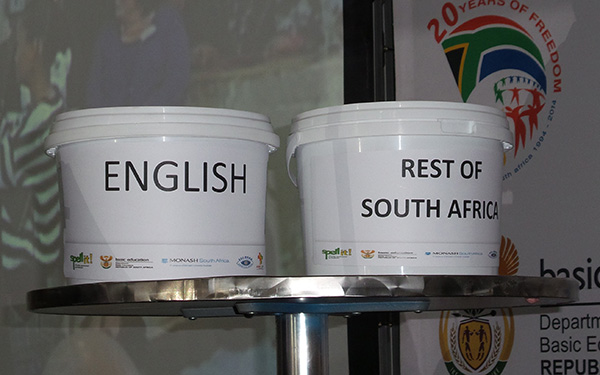 The contestants at the launch could choose words from these buckets before they tried spelling it correctly.

Perks of a spelling bee

Thirteen-year-old Brendan Craven was 2014’s winner. He and runner-up, Hlongwane, were awarded scholarships to study at Monash South Africa University at this year’s launch.

When asked how the Spelling Bee changed his life, Craven said: “It put me in the limelight.”

Even though he has participated in other school competitions, last year’s Spelling Bee was his first. “I have entered a competition called ‘Battle of the Books’ but my group from my school didn’t make it to the first round last year. We are going to take it more seriously this year.”

Battle of the Books quizzes learners on titles they are required to read.

Craven said one of his most challenging words to spell is “thoroughbred” – a special bred horse used for racing and that his favourite book is one he is currently reading – Twenty Thousand Leagues under the Sea by Jules Verne.

Hlongwane said the competition has improved her spelling. “My reading and understanding of words has also improved. I was also taught pronunciation.”

SABC’S Iris Cupido, a guest at the launch, saluted parents and the Department of Education for encouraging learners to read. She asked learners to pick up a book when they got home rather than picking up an Xbox gamepad. She remembered how, when she was young, a book would transport her to different places. “I said to my friends: ‘If you want to make me happy, buy me a book.'”

Dr Granville Whittle, acting director general for the Department of Basic Education, said there is not enough reading material in classes. “We have to make sure we flood our schools with age appropriate books.”

He said it is not just the responsibility of the government. “We have an obligation, not just as the government, but all of us within our communities to make a difference.”

Whittle said anyone can volunteer at a school’s reading club. “If the school does not have a reading club, contact the department.”

Kone Gugushe, divisional executive for corporate social investment at Nedbank, said they would be investing R2 million and over 20 bank employees are volunteering as coaches and mentors in Gauteng and the Eastern Cape.

Watch Brendan Craven spell during the launch of the 2015 National Spelling Bee contest:

Watch Angel Hlongwane show off her confidence as she takes part in a contest at the launch: