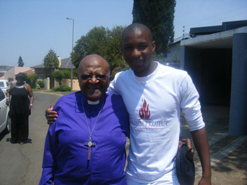 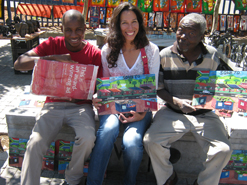 Visitors get the chance to engage with
local artists as part of the Ek sê Tour.
(Images: Lesika Matlou)

Using local lingo for his business’s name, Ek sê Tours, adds to the appeal and authenticity of the four-month-old venture, which Matlou hopes will make him the best such operator in the business one day.

Matlou, one of four selected candidates participating in the entrepreneurial incubator Awethu, is spending time with the organisation, learning the ins and outs of sound business principles as he builds his business up from the ground.

Since so many tour operators are already working the beat in Soweto, Matlou had to come up with something “a little different, out of the box”, he says.

Hailing from Rustenburg in North West province, Matlou has the added challenge of not being a Soweto local, but his approach seems to be working.

“Awethu believes he has what it takes to turn the business into one of the best,” says the organisation’s co-founder Yusuf Randera-Rees.

Telling the Soweto story in one day can be a tall order as it has so many aspects, including Nelson Mandela, who once lived in the township; Hector Pieterson, the first documented fatality of the 1976 riots there; and the historical Freedom Charter, which was adopted in Soweto in 1955 and forms the foundation of South Africa’s present-day Constitution.

Soweto is also a brew of cultures bubbling with energy, where small stories of no less importance are made every day – and it is these that Matlou, through Ek sê Tours, wants to relate to his clients.

“We kick off the tour by introducing the group to the different cultures.” Mementoes of each ethnic group, where possible, are passed around: mopane worms from Limpopo and Mpumalanga, a protein-rich delicacy eaten either dried as a snack or in a stew, and long-stem traditional Xhosa pipes called inqawa.

In Eastern Cape communities these are typically smoked by older females with a high status.

Visitors are also shown beaded love letters from KwaZulu-Natal, the type which Zulu women give to their beloveds. The small, square artefacts are passed around while Matlou relates their significance and are also offered for sale during the tour.

Then the tour group sets off to the Orlando Towers to get a bird’s eye view of the sprawling South Western Township, the name which was later shortened to Soweto during the apartheid years.

Throughout Matlou shares other cultural anecdotes of Soweto’s varied inhabitants: communities from Swaziland have also found a home in Soweto, and their culture is known especially for its famous reed dance, during which the Swazi king choses his next bride.

The intricate and colourful hut paintings of the Ndebele are also showcased, as are the Sotho people and their distinctive clans.

Matlou adds a modern twist to his tour offering: each member of the group is given a handheld MP3 player which provides additional audio-visual information that enhances the visitor’s experience.

This includes video footage of the 1976 student uprising and the story of the young Hector Pieterson, giving the visitors a real sense of the scale of the event.

While the tour takes in all the important sites such as Vilakazi Street, where both Nelson Mandela and Archbishop Emeritus Desmond Tutu used to live, and Kliptown, Soweto’s oldest suburb, it does not neglect the small things: like enjoying a local speciality, the kota burger. This is a thick slice of pink polony, bright yellow slice of processed cheese and greasy chips served between two halves of a bun – and eaten at one of the many “not so famous” eating spots in the township.

“The feedback received from those who have attended shows that our tour provides the right kind of balance,” says Matlou.

It is also this mix of history and diversity which continues to intrigue visitors and make Soweto one of the most popular tourist attractions in Johannesburg.

In the meantime, back at the office at the Constitutional Hill precinct, mentor Randera-Rees gives his support and guidance to his first four applicants.

Besides Matlou, there is Chris Pienaar, Awethu’s very first entrepreneur whose bread delivery business in Alexandra township has already made world headlines.

Another participant is Bra Wor creator Sekhabile Lekgoate, whose business brings the chisa nyama (meaning “burn the meat” in township slang) to your doorstep.

Chisa nyama is a type of traditional barbeque that’s highly popular in the township.

Awethu’s business model is simple, says Randera-Rees. The organisation does not look at conventional qualifiers such as education and work experience when choosing to support an individual.

Its only requirement is that the person should have had “no access to systemic opportunities” and be able to prove that he or she is one of the best, he says.

“We feel those things (like education) are irrelevant to the real entrepreneurial spirit.”

The 2 000 applicants who have walked through Awethu’s doors since it opened 19 months ago have had to go through a rigorous sifting process, including a battery of psychometric tests and a practical test whereby applicants must literally go out and make money.

The latter often reveals those with true business sense.

“We measure you on the profitability and innovation of your venture. It is a pure test of entrepreneurial spirit,” says Randera-Rees.

Awethu is sponsored by Discovery Holdings and plans to add another 15 entrepreneurs to the portfolio by next year. Randera-Rees says there are about 1-million informal, small entrepreneurs in Gauteng province alone, which is the talent pool he wants to target and empower.

Randera-Rees started the organisation with friend Ryan Pakter. Both went to Harvard University in the US and later worked overseas, but regularly returned to their home country.

Randera-Rees recalls: “On my return visits it always struck me just how many talented people were out there who are held back by lack of formal training and resources,” adding that they started Awethu because they were “inspired by the new South Africa”.

Pakter has since quit the venture to pursue business interests, but for Randera-Rees this venture is a passion which he wants to see out for as long as possible. His efforts have not gone unnoticed, even outside South Africa.

He recently received international recognition for Awethu when he was chosen as one of 15 Echoing Green Fellows, class of 2011. This is some achievement considering General Atlantic, the organisation which runs the fellowship, received almost 3 000 applications from over 100 countries.

Fellows are chosen each year based on their innovative ideas, creativity and steadfast approach in order to make a real and lasting social change in the world.

Their work takes place in a broad range of disciplines ranging from genocide to education and political injustice, but they all share a passion to make a change through real social investment in communities in need of help.

The fellowship programme runs over two years and “helps the chosen individuals to develop new solutions to society’s most difficult problems”, according to the Echoing Green website.

Echoing Green awarded its first social entrepreneur fellowship in 1987. Individuals who receive the fellowship accolade are considered to be visionaries and leaders in their respective fields.