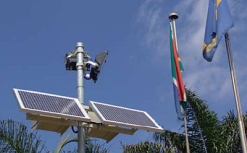 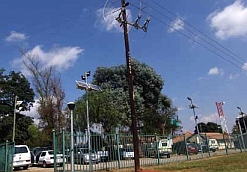 The police station now need not rely on
the sometimes erratic national grid. 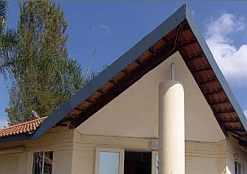 The small solar panel is visible on the
roof, in the left of the photo. 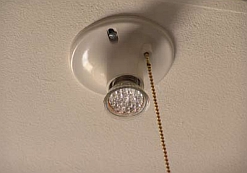 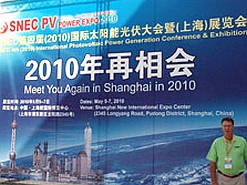 Pretoria-based businessman Michael Addinall is something of a solar lighting pioneer in South Africa.

Not only are he and his four business partners and their company Betta Lights responsible for the first solar-lit police station in the country, but they have developed a complete, affordable solar lighting system for low-cost housing.

Two years ago Addinall was on the site of a low-cost housing development in the Mogale City municipality, west of Johannesburg, to consult with the city council on the installation of smart metering for water and lights.

Smart metering takes metering to the next level, with advanced features such as power outage notification, real-time measuring, and two-way communication with the local utility for billing purposes.

The group was still there after darkness had fallen, and Addinall was struck by the fact that none of the houses had electricity. Municipality staff at the scene explained that because most of the residents were indigent, the council would not allocate money for infrastructure, and in any case the national power provider Eskom could not supply power to the site.

Addinall entered a nearby house and was horrified to see two children battling to do their homework in dim candlelight, while their mother cooked supper on a paraffin stove. With the progression of technology in the 21st century, he thought, people should not have to struggle so.

“I believe in poverty eradication through education,” he said, “and children can’t study in the dark.”

The power of the sun

That was the beginning of Betta Lights and the Betta.Life.Light solar lighting system. Specifically designed to work around situations where people were not connected to the national grid, the system uses South Africa’s ample supply of sunlight to illuminate a small house of about 50m².

Betta Lights’s stated mission is poverty alleviation and a better life for those in poor and rural communities, while contributing to the reduction of greenhouse gases by developing, supplying and supporting specialised solar solutions.

All components, wiring and brackets for Betta.Life.Light are supplied in a single package and are guaranteed for one year. Installation is easy and well within the capabilities of the handyman of the house.

The system comprises five lights – four ceiling lights and a reading lamp – plus a mobile phone charger and adapters for popular phone brands.

All units are powered by a solar panel that is has an expected life of 25 years and is connected to a controller unit, which in turn feeds to the lights and a rechargeable 6-volt battery.

Betta Lights use batteries which are kinder to the environment, are more robust and have a longer life than the conventional lead acid batteries. This is important for people who are already financially challenged.

Each light contains 22 light-emitting diodes (LEDs) which are far more efficient than even the compact fluorescent lamps that most people use now. LEDs use very little power and efficiently convert electrical energy into light. Because they are made of non-toxic materials, are recyclable and have a long life, LED lights are environment-friendly.

Betta Lights claims that with all five lights on simultaneously, the system will function for up to 15 hours even if there is no sun.

The Betta.Life.Light installed cost would be approximately US$379 (R3 400 exclusive of vat). Addinall acknowledges that this may be out of reach of poor families and is working to enlist government’s help in making it more accessible.

“Government should be giving this to people at no charge,” said the businessman, adding that light was a basic necessity of life and that the cost of a retrofit system will be recouped in six years, while a new installation, replacing fuel based lighting, will pay for itself in about three years.

“Certain households qualify for 50 free units of electricity a month,” he said, “but that is used up within days. These people then stand in queues to buy R5 or R10 worth of prepaid electricity. We can offer a realistic solution.”

“Police stations should never have to shut down because of a power outage,” said Addinall. “During power cuts the Boschkop police station stands out like a beacon in the dark. Before we installed the system, the station had been waiting two years for the Department of Public Works to fix the lights.”

He added that currently there are between 30 and 40 police stations without power around South Africa. Boschkop was a pilot project and the South African Police Service has since acknowledged the value of solar power at police stations, thus allowing them to efficiently serve their communities.

In March 2009 Addinall travelled to Shanghai, China, to attend the fourth Asia Solar Photovoltaic Exhibition. Betta Lights was the only African exhibitor out of 362 from more than 20 countries. With its flagship Betta.Life.Light system, the company was one of just two to offer a practical solar solution in addition to showing off their technology.

Betta Lights is now in the running for the 2009 eta Awards, given annually by Eskom and the Department of Minerals and Energy in recognition of those companies or individuals who lead the way in the efficient use of energy. The award ceremony takes place in October 2009.

Products developed and made by Betta Lights have been endorsed by the Central Energy Fund, a division of the Department of Minerals and Energy.