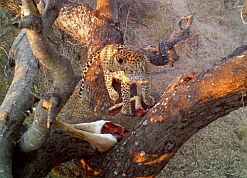 The leopard is elusive in nature and is
seen here feasting on a springbok. 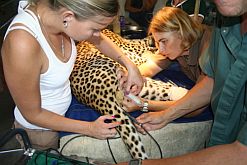 Sperm is collected from a wild leopard
for research purposes.
(Images: The Leopard Conservation Project)

South African conservationist Fred Berrange is on a mission to protect the endangered leopard, with the help of petroleum giant, Total.

Berrange believes that leopard poaching is just as rife as rhino poaching but isn’t publicised as the latter.

“The leopard is as much in danger of extinction as the rhino, but not enough people are aware of this fact,” said Berrange.

Berrange, who founded the Leopard Conservation Project in 2000, has saved 19 leopards from traps, snares, illegal cage traps and gin traps, this year alone and has captured and released 75 since its inception.

The projects main focus is protecting leopards from poaching, poisoning, trapping and over-hunting but in recent years there has also been an emphasis on the collection of data regarding population, territory, genetics and diversity.

Total is sponsoring the project with fuel so that the team of conservationists can move within different regions of the country collecting data on population and territory size, as well as the genetic relatedness and diversity of leopards.

“Total’s sponsorship of our fuel is a massive win for us as it means that we can get to where we need to be when we need to be there,” said Berrange, speaking from Gravelotte in Limpopo Province, where he is tracking a leopard in search of food for itself and its cubs.

Total is also the supplier of fuel to South Africa’s SANParks body which manages national parks.

Reina Cullinan, Total South Africa’s marketing manager, said: “As a responsible company we are passionate about environmental issues and about preserving the country’s wildlife.

“We believe that the Leopard Conservation Project is doing vital work in improving the prospects for leopards which are under constant threat from a variety of man related pressures and actions.”

The focus of the project

The accreditation by the departments will help the project which covers a study area of 100 000km² in the Waterberg region of the Limpopo Province.

The project has three areas of focus which are protection, research and education.

Being a high-profile cat species, the leopard’s value in the tourism industry cannot be underestimated, so the LCP works closely with farmers, conservation bodies and other research organisations to protect its existence.

As part of its research, the conservation project teamed up with the University of Johannesburg to “study the physiological, morphological, development and viability of the spermatozoa from the males of these untraditionally researched animals, which could lead to later success in assisted reproduction”, according to Berrange.

This will entail the drawing of sperm from the male species to preserve and later use in assisted reproduction because “both tourist and local hunting activities of the leopard will result in a decrease of the ‘good’ gene pool within this species”.

To research what motivates the leopards movement, how human habitation and development affects this movement, the leopards that are saved from traps or are sighted get collared to track their movement.

From the research, the population and territory sizes; photographic database of individual leopards; prey preference; infant growth and mortality rates, as well as male to female ratios in specific areas will be known.

These findings will assist farmers better protect their livestock and will educate people on the issues facing the leopard due to us infringing on its territory.

Although Total and other companies are aiding the project to fulfil its objectives, it is always in constant need of more help.

“Some young leopards need to be hand reared and then released back into the wild, this process is costly. Please help the project through sponsoring equipment, services or by depositing into the LCP’s bank account directly,” said Berrange.

Those that help out will have their companies logo displayed on the projects website, where they can also find the project’s banking details.