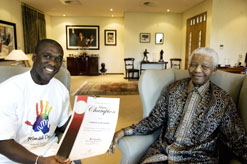 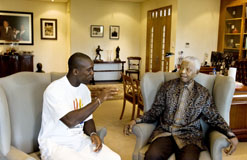 Seedorf says the moments he spent with
Nelson Mandela will remain with him
forever.
(Images: Lauren Mulligan for Nelson
Mandela Foundation 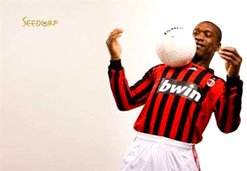 The Dutch-Surinamese player is regarded
as one of the best in the world.
(Image: Clarence Seedorf offical
website)

Renowned Dutch football player Clarence Seedorf has joined A-list personalities in becoming the latest celebrity to be named one of the Nelson Mandela Foundation’s Legacy Champions.

The sporting legend jetted into South Africa in early June to receive the award for his humanitarian work through his charity organisation Champions for Children.

The organisation is set to open a Champions Playground, a multi-functional sports complex for children in Cape Town.

The sports centre will be built in Manenberg and is to be inaugurated during the 2010 Fifa World Cup.

The project is a joint venture between Seedorf’s organisation, the Nelson Mandela Foundation, the Italian university Università Cattolica del Sacro Cuore and the University of the Western Cape.

During his short visit Seedorf met with former president Nelson Mandela on 5 June, which according to his online blog, was a special moment in his life, “It was a very special day today. For my whole life I have been inspired by his life and work. It is an honour for me to have become a Legacy Champion.”

In addressing the media following the meeting between Seedorf and Mandela, Nelson Mandela Foundation chief executive officer Achmat Dangor said he was proud that the soccer legend is now part of the foundation.

“Clarence Seedorf can count himself among those who will help ensure that this organisation, founded by Mr Mandela himself in 1999, will become financially independent, ensuring that it continues to promote Madiba’s vision, values and work.”

He started playing football in the early 1990s, but his big break came in 1994 when he became the youngest player to join the Ajax Amsterdam first team at the tender age of 16.

Since then, the 33-year-old’s meteoric rise in the football fraternity has been nothing less than stellar.

He is the only player in history to have won the Uefa Champions League with three different football clubs.

In the Dutch leagues, he has four domestic league titles, and three domestic super cups.

According to the football star’s website, no Dutch player in history has won more silverware than Seedorf.

To add to his accolades, at the 10th annual Uefa Club Football Awards in 2007, Clarence was recognised as Europe’s best midfielder. The same year, he was awarded a Torretta award for best European athlete.

Aside from his sporting achievements, Seedorf is perhaps most regarded for his humanitarian work.

Growing up in the small former Dutch colony Suriname, the smallest country in South America, Seedorf grew up with a dream of becoming a football player, despite being told that he couldn’t because of his weak lungs.

According to his official blog, he learned at an early age what it meant to hope and dream, and that he wanted to share this with others. “From my days as a child, watching famine strangle Ethiopia, I made a promise to myself to do whatever I could to help those, and others, when I was old enough, and had the means to do so.”

Preserving the legacy of Nelson Mandela

According to its website, the Nelson Mandela Foundation “contributes to the making of a just society by promoting the vision, values and work of its founder and convening dialogue around critical social issues.”

In 2006, the foundation, with the help of the Centre of Memory and Dialogue, adopted a two-pronged strategy.

The memory programme will deal with documenting the life and times of Mandela, through its records and documentation unit.

It locates scattered material on Mandela, with the objective of ensuring that all resources linked to Mandela are presented in a way that preserves his memory.

The dialogue programme will deal with developing and sustaining a dialogue platform, in line with its founder’s legacy.

The centre of dialogue will encourage South Africans to speak to each other in a manner where every person’s voice is heard, regardless of their background, race, or political affiliation.

As part of its dialogue series, the Nelson Mandela lecture is held annually at the foundation.

He delivered the lecture on the topic “Investment in the marginalised as a way of creating wealth and combating poverty.”

Prof Yunus is a distinguished scholar and businessman and the founder of the Grameen Bank in Bangladesh in the 1970s. The bank now operates in more than 100 countries.

He has received over 70 major international awards for his work and has 29 honorary degrees under his belt.