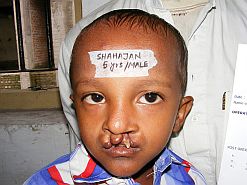 The Smile Foundation aims to restore
the dignity of children born with facial
disfigurements like a cleft lip and palate.
(Image: Flickr) 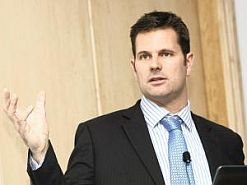 Dr Jonathan Louw, CEO of Adcock Ingram
Healthcare, said they were humbled to be
part of this philanthropic initiative.
(Image: Adcock Ingram)

Twenty children with facial disfigurement caused by a cleft lip, cleft palate or paralysis will finally get the chance to smile after receiving reconstructive surgery during the Smile Foundation’s Smile Week.

The event, being held at the Red Cross War Memorial Children’s Hospital in Cape Town from 25 to 29 July 2011, is a partnership between the foundation and pharmaceutical company, Adcock Ingram. The children receiving surgery are of varying ages and include Amber, who was born with a cleft palate and is only six months old.

“These children’s parents, families and communities will soon celebrate the fact that they have a beautiful smile and can go off to school when they’re older without fear of being teased or isolated,” Moira Gerszt, chief operating officer of the Foundation, said in a statement.

“Our partnership with Adcock Ingram began last year. With their support, we will have made a difference in the lives of almost 40 children by the end of this Smile Week.” Before the start of Smile Week, 20 children had already received reconstructive surgery.

Once identified, patients are assessed to determine the severity of their condition. Depending on the extent of their disfigurement, they are then either put on the list of the nearest participating hospital, or put on the surgery list of the Smile Week in their area.

According to Dr Jonathan Louw, CEO of Adcock Ingram Healthcare, the surgery provides more than just smiles. “The funding that Adcock Ingram contributes towards these life-changing operations not only lessens the deformity of these children, but ensures that every child is able to swallow both solids and liquids with ease,” he said.

“Our partnership with the Smile Foundation reiterates our commitment to adding value to life and changing one child at a time.”

The Smile Foundation and Red Cross War Memorial Children’s Hospital have entered a three-year partnership to implement Smile Week, with the NGO funding the surgery and associated resources required, and the hospital providing infrastructure, staff, care, treatment and expertise.

The paediatric hospital recently opened the first paediatric endoscopic surgical training centre in sub-Saharan Africa. A R13.8-million (US$2-million) facility, the centre aims to develop and improve the endoscopic surgery skills of surgeons in South Africa and elsewhere on the African continent.

Over the past 10 years, the Smile Foundation and its six academic hospital partners have given the gift of a smile to more than 700 disfigured children across South Africa.

In the Western Cape alone, 80 children have received surgery since the first Smile Week was launched in the province.

“We are proud to have some of the best surgeons in the world to take part in this project,” said Theuns Botha, Western Cape health minister. These doctors include Dr Saleigh Adams, Dr Dirk Lazarus, Dr Greg Hein and Dr Suvier Singh.

“These operations will enable children to smile. No money can buy that. This project is a joint investment in our youth and the future wellness of our people.”