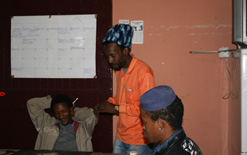 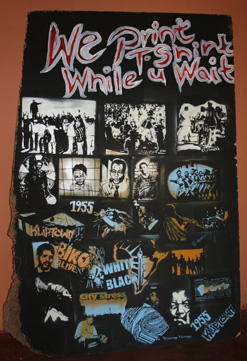 Members of the Soweto Kliptown Youth
have learned to use their artistic talents to
create business opportunities for themselves
(Image: Tamara O’Reilly)

Bob Nameng’s work as the founder of the Soweto Kliptown Youth project has turned him into a celebrity of sorts in Kliptown, so much so that engaging in conversation with him without being interrupted is impossible.

Sitting in the shade of a fence that separates a train station from one of the project’s art workshops, everyone who notices him stops to have lengthy cordial conversations – and he’s so accommodating he doesn’t even give them the standard “come back later” response.

“No matter what I’m doing, I never turn anyone away,” says Nameng. “It’s not my policy. My doors and arms are open to anyone.” With the number of projects he’s undertaken to improve the lives of people in this community, that statement seems genuine. At the age of 16 he founded the Kliptown Child and Youth Club, now known as Soweto Kliptown Youth or SKY, one of the oldest surviving centres for youth in Soweto.

The need for such a centre grew out of his own observations of what was lacking for the younger generation of Soweto and his own tragic experiences.

Kliptown is a crowded informal settlement of about 50 000 people. As the birthplace of the Freedom Charter of 1955, the beginning of a long battle against apartheid, the area has great historical importance. Since democracy was achieved hundreds of economic, social development and infrastructure projects have take place in Soweto, however this area still has a high unemployment rate, poor infrastructure, few libraries and clinics, and the prevalence of HIV/Aids remains a concern.

“I grew up in nearby Meadowlands. My mum died when I was four, my father when I was six and my physically challenged brother when I was 12. With all this darkness around me I was searching for some light which I obviously wasn’t getting at home. So I joined the streets,” says Nameng.

The dawn of SKY

After a year of no school and resorting to thuggish means to survive, an aunt “rescued” him, taking him to her home in Kliptown where she cared for him. It was the power of knowing that someone cared, says Nameng, that made him decide to offer kids from similar backgrounds a place to go where they also felt loved and sheltered.

At the age of 16, in the two-roomed home where he still resides, he began holding choir sessions with 12 youths from the neighbourhood. The number of members soon increased and after school and weekends became a time of drawing, reading, learning and discussing issues, and finding solutions to the issues that affected members.

Soon it became a place where children and teenagers would gather after school for entertainment ranging from dance to craft-making – a tradition that has lasted 22 years. As part of their development, kids are also encouraged to participate in sports like basketball, cricket and soccer.

“Soccer is a much-loved game in this community. It has the power to give the young guys and girls characteristics like confidence and assertiveness. These are things you need if you want to make it in this community. You have no idea how many kids have been part of SKY. Many of them came here with a serious lack of ambition and I feel we managed to instil that in many of our members,” says Nameng.

Every day about 300 children from the age of four upwards are fed at the centre – before school, after school and just before returning to their homes. Some of the vegetables are grown on the premises giving the youth a chance to learn basic farming skills.

“We all know that a child cannot learn on an empty stomach and very often there is no food to eat when they get home. Through our feeding project we aim to educate children about nutrition, and to contribute to their physical and mental development. One of the most important reasons we have this project is to provide for the nutritional needs of those kids who are infected with HIV.”

The organisation and its activities are sustained through generous donations from people all over the world who hear about SKY, as well as proceeds from various arts and entrepreneurship projects. One such project is providing a tour guide service to local and international tourists.

“I’m trying to kill this culture of handouts that has been entrenched in so many people, especially youngsters,” says Nameng. “Being underprivileged does not mean that things are owed to you. Our youth need to be taught to be self sufficient and the tour guide operation and art and craft business are some of the ways we achieve that with our members.”

The SKY foundation has spread to other parts of Johannesburg, with 14 community centres being established in impoverished areas of the city, like the Orange Farm informal settlement south of Johannesburg. Exchange programmes with schools such as Noble and Greenough in Massachusetts in the US as well as invitations for members to perform at international music and art festivals have put SKY on the map.