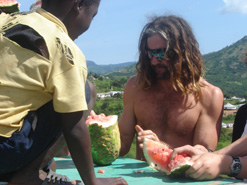 The soul of KwaZulu-Natal’s imposing Valley of a Thousand Hills is to be found in the majestic and extraordinarily green hills spread out as far as the eye can see. It’s easy to get lost in the beauty of the landscape, virtually untouched by urbanisation.

It is against this backdrop that internationally renowned skater Dallas Oberholzer is living his dream life. When he first started building a skateboard park in the heart of the valley, many thought he had lost his mind. But six years down the line and after numerous consultations with the chiefs of the KwaXimba district, Oberholzer has secured land in Isithumba village to continue building and expanding what is now known as the Indigo Skate Park.

The skateboard “headquarters” consists of a large household of eight tin-roofed rondavels, aptly painted green. These are used for various activities during week-long camps for young skaters. One or two of the huts are used as dormitories during camp; another has the amenities of a video lounge and the “Ancestors Rondavel” serves for lectures. It’s a typical Zulu compound with livestock – including ducks, roaming freely around. The skate camp is a community-run project and is shared with the locals in terms of the services provided.

Life at the skate camp

It’s just after 8am on a Sunday morning. The young skaters, ranging from ages nine to 18, have not yet emerged from their hut as they’ve been skating until three o’clock that morning. But Oberholzer, a tanned and dreadlocked skater, is up already, dressed in khaki shorts and ensuring that breakfast is ready for the young ones when they emerge. He stands out in the village, a young white man living comfortably in the community. Everyone knows him and he’s on a first-name basis with his neighbours.

After about 15 minutes, the skaters slowly emerge from their hut with sleepy eyes and plonk themselves on the “icansi”, a traditional Zulu mat, where a medley of fruit and some juice is served. Breakfast is shortly interrupted by Oberholzer instructing the boys to head down to the skate park for the morning’s stretching session.

A group of 12 campers from the North Beach Skate Park in Durban, including a 12-year-old street kid, are attending Summer Camp Two, one of five camps run throughout the year at Isithumba. Before arriving at the camp the children are advised what to expect. Most of the young campers have never been to a rural environment. The skate camp website reads “Our Camp and Skate Park are found within the property part of the Msomi family … Indigo Skate Camp is a community-based project. Over the past four years we have developed a mutually beneficial relationship with the Msomi household who had the foresight to allow us to build a skate park on their property.”

Following a generous grant from the Sports Trust – an independent body funded by a range of major companies, as well as Element USA, an American firm selling skateboards, shoes and clothes, videos and photographs, Oberholzer will now be able to expand the existing park to build a uniquely African version. Currently, the skate park is located on the extensive grounds of the Msomi household. It has a 1.52m ramp joined adjacently to a 2.71m ramp and a 3.96 foot extension.

Roaming around the campsite is Chris Scanlon, a native of Haines, Alaska. He met Dallas Oberholzer on the Internet, through mutual skating interests. Scanlon says it had always been his wish to come to Africa. “I knew Dallas because he is a world famous skater. I’d always wanted to come here [to Africa] but I didn’t want to come here as a stupid white tourist. When Dallas told me about the work that he’s doing to uplift the community of Isithumba through the skating, I finally had a reason to come.”

Scanlon’s desire to be part of the community project stems from his own passion of developing young people. “In Alaska, I work with kids too. I work with the Klinket people. They are like the Zulus of Alaska – poor but very cultured. Most of those kids come from dysfunctional families where a lot of their fathers are alcoholics and they grow up in abusive homes.”

Scanlon took it upon himself to skate with the kids and also do graffiti with them as a form of anger management, giving them the means to vent their feelings about their family circumstances.

Although Scanlon has only been in South Africa for a month now, he has become very close to the project. He spends hours with Oberholzer digging where the new expanded skate park is going to be and he is also very involved in the camps. The two men, with their common vision and desire to develop young people, have become quite close and Scanlon is like an “uncle” to the children.

The man himself, Dallas Oberholzer, who was raised in Johannesburg, is very modest about his own achievements. He casually asks “Have you read the information on the website?” so that he need not repeat his long history with skateboarding. “Skating is too competitive. For me skating started as self-discovery and adventure. What I’m doing now is like coming full circle to that self-discovery and adventure. It’s fresh!” he says.

Oberholzer is a world-famous skater who has performed with the likes of skating legend Tony Hawk. His journey of self-discovery in skating has taken him to over 40 countries throughout the world, participating in major contests including Slam City Jam in Vancouver, Canada.

In 2000, he attended the European Downhill Championships where he won 1st place at the Hot Heels Downhill Festival, an achievement reported on CNN international news. In that same year in November, he skated in the Australian X-Games, where he walked away with fifth prize. His true fulfilment, though, came in discovering the Isithumba area after he had decided to implement his idea of starting a skate park in that area. Finally on 16 June 2005, which is also marked as Youth Day in South Africa, the skate park opened its doors.

But the road has not been easy. His own white community shunned him at first, misinterpreting what he was doing in the Valley of a Thousand Hills. “I’ve always been viewed in a different light,” he says. “My parents had an issue with it at first, but they got over it. I used to get people asking me why I wanted to live there and the negatives of living here, but I didn’t believe in everyone, but rather in my own truth. The undercover racists would say ‘it’s good that you are helping the blacks’ but for me, this was yet another place to explore and have fun skating.”

He says he received a warmer reception from the locals, who, although surprised at why he would decide to live in Isithumba, welcomed him as a brother.

In September next year, Oberholzer is planning to travel overseas to the United States to present a photographic exhibition of the work being done during the Indigo camps at the San Diego Skate Trade Show in San Diego, California. A German company is also planning a visit to the site in 2008 to help re-surface the ramps. But in the meantime, Oberholzer continues with life at Isithumba, where the pages of the history of the Valley of a Thousand Hills are being re-written, one ramp at a time.