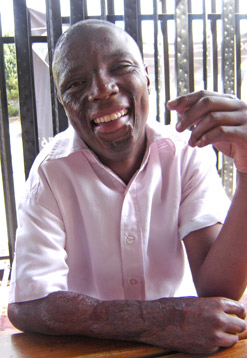 Grade 11 learner Musa Zwane is relieved it’s Friday afternoon and school is done for the week. At least, he thinks, he won’t have to deal with spiteful comments from his classmates for two days.

Eighteen-year-old Zwane from Alexandra, north of Johannesburg, is a shack fire survivor. When he was three years old, he sustained first-degree burns when a fire broke out inside his family’s shack. Although he’s been living with the disfigurement for 15 years, he still deals with the emotional pain of being taunted by other children.

“Today at school I was called ‘fried roast meat.’ This hurt my feelings, because the comments came from someone I thought was a friend,” he says with sadness in his voice.

According to statistics by Childsafe, an organisation helping parents understand child injuries and take preventative measures, injury is the leading cause of death and disability among South African children. The leading external causes of fatal injuries to children are firearm injuries, burns, motor vehicle accidents and drowning. While more than 70% of childhood injuries occur in and around children’s homes, the statistics also show that more than 80% of childhood injuries can be prevented.

Ali Gule is the founding member of the non-profit organisation Safey in Action. The organisation, similar to Childsafe, teaches children safety skills, particularly in South Africa’s black townships. Gule says they teach children how to react when a fire breaks out – including how to protect themselves.

The programme also equips the children with skills to use in other areas of their lives. They are taught social skills, taught not to talk to strangers and how to recognise inappropriate behaviour from an adult. Health issues are also covered, such as teaching children how to wash their hands properly and the benefits of living in a clean environment.

Gule says they are hoping to take the children overseas, to experience life in another country, but also, they would be keen to meet with other children who have been victims of fire.

Zwane says even though the malicious comments made by his classmates are now far in between, they still hurt.

“It’s hard for me when they call me names, because I wasn’t born like this. But I have to find a way to make it work, because I’m not the type of person who doesn’t like to talk to others. I’m very outspoken.”

He says even though he’s generally a positive person, sometimes his classmates make it difficult for him to cope. “I am a human being, and I think they have to treat me like a normal person, not a creature. I hate it because it brings down my self-esteem and self-image”

In a bid to address the emotional scars of the children, in December 2007 Safety in Action took 20 fire-scarred kids on a four-day therapy camp to the Kruger National Park. Psychologists and social workers were roped into the event, sponsored by the Department of Education. Many of the children were being continually taunted at school and were reluctant to continue with their education.

Although the aim of the camp was to address the emotional needs of the children, the programme focused on fun-orientated activities, which the children would find easy to participate in.

Children were taught to overcome their fears by learning how to swim, which can be a daunting task if you come from an environment where facilities such as swimming pools are not available. The different activities were then used as a metaphor to teach the children more about dealing with emotional pain, having constructive outlets and standing up for themselves.

The Mpumalanga provincial branch of Childline was also involved in the camp, bringing in mind-exercising games, which enabled the children to expand their thinking capacities. The kids were also taken on a game drive.

Zwane benefited from the camp, and is looking forward to completing high school. “I want to study graphic design, but my real passion is fashion design,” he says with excitement. “I want to design beautiful dresses, and my preferred fabric to use is silk,”. Zwane is also looking forward to learning how to drive, and to leading a normal teenage life.

In 1996, in a Johannesburg hospital, Jones met Dorah Mokoena, an infant who had been terribly disfigured by a squatter camp shack fire at the age of seven months. Jones, her son Tristan and his friend Thobeka befriended the baby.

Mokoena’s biological mother Margaret abandoned her for more than three years but was reunited with her daughter after Jones’s relentless efforts. But the reunion was short lived. Two years later, the little girl’s mother abandoned her again. Mokoena, who turns 14 in April, now lives full time in the Children of Fire home.

In September 2001, Children of Fire’s frequent work in Alexandra, and particularly the shack-fire deaths of three children, led the organisation to further investigate the root causes of fires in the severely overcrowded township. The result was Umashesha (a Zulu word meaning to be quick, or one that is quick), a programme aiming to educate people about avoidable danger and get them to look after themselves and their community. It also involves training in first aid and in fire fighting and prevention. The programme also trains individuals who go on to become public educators and safety workers in their local communities.