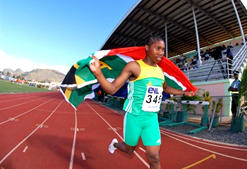 Caster Semenya has done South Africa
proud, despite the controversy around
her gender.
(Image: IAAF)

South African athlete Caster Semenya has proven she’s determine to overcome the hurdles in her path after winning the women’s 800m final at the 12th World Athletics Championships in Berlin, Germany, on 19 August 2009.

The 18-year-old sprinter achieved this amid roaring controversy over her gender.

Her outstanding performance during elimination round heats in Berlin raised suspicions that she could in fact be male – given her strong build and rapid pace.

Following this the media went into a frenzy and the International Association of Athletics Federations (IAAF) eventually bowed to pressure, insisting she undergo a gender test upon her return to South Africa.

With all this, the young star still managed to win the finals in a record time of one minute and 55 seconds, dethroning defending champion Janeth Jepkosgei of Kenya by 2.45 seconds.

Semenya also beat her own record set during an 800m event leading up to the finals.

Jepkosgei took the silver medal, while Jennifer Meadows of Britain was awarded bronze.

Semenya now holds the fastest time for 800m clocked by any female athlete in the world.

A thick skin and determination

Semenya burst on to the international sports scene for the first time on 31 July 2009, achieving a time of 1 minute and 56 seconds for 800m at the ninth Africa Junior Championship in Mauritius.

At first her astounding performance raised suspicions that she was on steroids.

The drug tests came back clean, but later the IAAF maintained it had to investigate Semenya, and contacted Athletics South Africa to conduct gender verification tests.

South African sports organisations have been outraged by what they describe as a “humiliating process” for the young athlete.

The South African Department of Sports and Recreation has released a statement voicing its disappointment at the speculations.

“We have no reason to doubt that Athletics South Africa would send a male athlete to compete as a female or vice versa, in any championship.”

“She has already proven what a classy athlete she is and it is now time for her to show the world that she has a much bigger heart than we give her credit for,” read the statement.

The South African Sports Confederation and Olympic Committee (Sascoc) has also spoken out about the incident.

Sascoc president Gideon Sam said he was concerned about speculations around Semenya’s gender.

“If the IAAF feels it needs to give her a gender test, then they must also release the results to allow her to continue her development and put any malicious comment to bed.

“Caster has unbelievable talent and [is] an athlete we earmarked for big things …” Sam said.

He adds that Sascoc believes Semenya could be South Africa’s next big star to win gold at the 2012 Olympics in London.

Suspicions raised in the media

International media speculate that Semenya could be a hermaphrodite with a genetic disorder.

The Telegraph in the UK spoke to IAAF spokesperson Nick Davies, who confirmed that they were investigating the possibility that Semenya suffers from a chromosomal disorder.

Davies said that while the organisation didn’t think that Semenya had cheated by concealing true gender, she could have both male and female chromosomes.

The Australian reported that Semenya “may have to return [the gold medal] if she fails a gender verification test”.

“For me, she is not a woman,” the newspaper quoted Elisa Savinova as saying. Savinova is an Italian athlete who came in sixth place in the 800m final.

The South African media has taken a keen interest in Semenya’s story, tracking down her family to get their take on the controversy.

Speaking to The Star newspaper, Semenya’s mother Dorcus, a domestic worker in Limpopo province, said she is not concerned about the gender controversy.

“I am not even worried about that because I know who and what my child is. Mokgadi Caster is a girl and no one can change that,” the mother said, referring to her daughter by her African name.

Anyone from Seshego, the township in Limpopo where Semenya was raised, can confirm that she is female, Dorcus said.

“If you go at my home village and ask any of my neighbours, they will tell you that Mokgadi [Caster] is a girl.

“They know because they helped raise her. People can say whatever they like but the truth will remain, which is that my child is a girl. I am not concerned about such things.”

According Semenya’s grandmother, Maputhi Sekgala, being ridiculed for the shape of her body is nothing new to the star athlete.

Speaking to The Times newspaper, Sekgala said her granddaughter was teased when she was the only female member of the soccer team when she was growing up.

“I know she’s a woman, I raised her myself,” Sekgala added.

So close is the athlete to her grandmother that she caller her from Berlin when the controversy broke out.

“She called me after the heats and told me that they think she’s a man. What can I do when they call her a man, when she’s really not a man? It is God who made her look that way.”

Deborah Morolong, who attended high school with Semenya, says although her friend never took an interest in boys, her gender was never questioned.

“She never had a boyfriend. She doesn’t like boys. I think they are saying that [she’s a man] out of jealousy. It really hurts me when they say that about her.”

Semenya’s old school principal Eric Modiba says she was always a tomboy and that he only realised that she was a girl when she reached Grade 11.

“She was always rough and played with the boys. She liked soccer and wore pants to school. She never wore a dress. It was only in Grade 11 that I realised she’s a girl,” Modiba told Beeld newspaper.