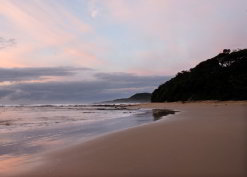 Through the Sea Pledge programme,
people are encouraged to preserve South
Africa’s coastline and the environment
in general.
(Image: MediaClubSouthAfrica.com. For
more free photos, visit the image library)

The hybrid cars that are carrying the Sea
Pledge message to towns and communities
all along South Africa’s coast.
(Image: SST)

A modern day crusade recently set off from Nelson Mandela Bay, Eastern Cape, to bring the status of the planet’s blue lungs – its oceans – to the attention of people living and working along South Africa’s coastline.

The drive will also create awareness around the much-anticipated climate conference COP17 taking place over November and December in Durban.

Driving under the banner of the Sustainable Seas Trust (SST) and the South East African Climate Consortium (SEACC), a group of students, scientists and environmental activists set off in two hybrid vehicles on 12 October to visit 25 towns along a 2 500km-plus stretch of coast.

Their aim: to get people to sign a Sea Pledge to commit to treating seas, estuaries, coastlines and oceans better in years to come.

The team has finished their KwaZulu-Natal leg of the trip and is now en route to the Garden Route and the Western Cape.

Vehicle manufacturer Honda, a leader in hybrid technology, sponsored the two vehicles involved in the project. Each car has superb green credentials, can travel 100km more per tank than similar fuel-powered vehicles, and has a carbon dioxide output of less than 110 grams per kilometre.

The industry norm for exemption from the South African government’s emissions tax on passenger vehicles is 120g/kms.

Working together to save the seas

It has a student forum representing the consortium at each of these academic institutions.

The organisation has earmarked 3 December for the culmination of its Sea Pledge drive – on this day the oceans will come under the spotlight at COP17.

SST has stated that it aims to have a million pledges by 3 December.

From Sodwana to Saldana

The Sea Pledge drive will cover almost the entire coastline of South Africa, taking in Sodwana on the east coast all the way to Saldanha on the west coast.

The event was launched at the Nelson Mandela Bay Business Chamber, the departure venue. Speaking at the event, SST founding trustee Tony Ribbink, a specialist on the coelacanth, the ancient fish which until 1938 was thought to be extinct, said the business community has a major role to play in bringing about positive momentum in green economic growth.

“Far too many companies and businesses are unaware of the significant difference they can make when it comes to climate issues,” he said. “We aim to show them that they too can play a positive role and benefit from these initiatives.”

The Sea Pledge drive is a crusade for change, added Ribbink. “It is one pledge with two goals: to reduce our emissions footprint and to increase our handprint, which entails helping others.”

Stopping the decline in fish populations

Ribbink said it is time the world sat up and took note of the drastic decline in the health of the world’s oceans and the living creatures inhabiting it. Just in terms of fishing volumes, there should be a major cause for concern, he said.

World fishing numbers have been in decline for a number of years and scientists are predicting the entire collapse of major fisheries by 2046.

But it is the survival of subsistence communities, whose very lives depend on the daily catch of fish, which is of most concern to SEACC. These communities will be most affected by mass extinction of fish species.

“By signing the Sea Pledge, your business will undertake to help save the seas, and more importantly, contribute to deal with issues of social justice and environmental conservation,” Ribbink told business representatives.

Each commitment will be added to a petition calling on the UN to make 2012 the International Year of Coasts and Oceans.

The Nelson Mandela Bay Business Chamber pledged its support during the event.

“The chamber is joining forces with SEACC at this event to encourage businesses to become proactive in their response to climate change,” said chamber CEO Kevin Hustler.

Guest speaker at the launch, air quality and climate change specialist and television presenter Simon Gear said the real impact of climate change has only been felt in the last decade. The increase in world temperatures is well recorded but is just a small part of this global phenomenon.

“The world has not become massively warmer over the last decade,” he said, “but half a percent increase in temperatures indicates enormous changes in kinetic energy and resultant climatic systems.”

It is for this reason that scientists prefer to talk about climate change rather than global warming nowadays, added Gear.

Sketching a rather bleak picture, Gear said the harnessing of fossil fuels remains the single biggest threat to the environment and will remain so as the country lacks a political will to move away from it. He told the gathering that local power utility Eskom supplier burns up 14 kilograms of coal and uses 36 litres of water to give an average household a day’s supply of electricity.

In summing up, Gear said that the Sea Pledge will make a valuable contribution towards protecting our fauna and flora and securing our water resources.