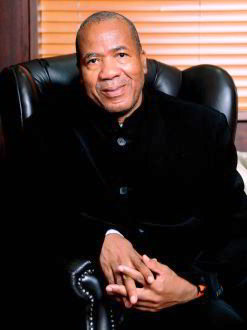 Prof Malegapuru Makgoba has been elected
vice-president of the International Council
for Science.
(Image: University of KwaZulu-Natal)

South Africa’s Prof Malegapuru Makgoba has been elected vice-president of the International Council for Science (ICSU), one of the most prestigious international bodies of its kind in the world.

“I feel humbled and inspired to be given such an opportunity,” says Makgoba, vice-chancellor of the University of KwaZulu-Natal (UKZN).

The professor, who is a trained physician and an internationally recognised molecular immunologist, says his new position will give him significant exposure to other respected scientists and scientific disciplines.

“What I find exciting about the work is meeting highly motivated and talented scientists from all over the world,” he says.

Although his main area of interest has always been basic science and health, he says the position will allow him to explore new areas of science. “It will enable me to broaden my horizons in science. I think it is going to be an enriching experience,” he adds.

His involvement with the ICSU will also promote South Africa’s participation in scientific matters of global concern. “As a country, we can play a major role in shaping the future of global science research collaboration and influence science policy,” he says.

The International Council for Science

Utilising science to find solutions to some of the world’s biggest challenges is a core focus of the council.

The ICSU, which is one of the oldest non-governmental organisations in the world, was established to promote international scientific activity with the emphasis on research outcomes that will benefit humanity.

The organisation identifies issues of importance to science and society, provides an enabling research environment for scientists across all disciplines and promotes the participation of scientists in international research projects.

Makgoba will serve as vice-president for three years. In this time, he is required to attend a minimum of two international ICSU meetings in Paris each year. He will also be involved in the planning of international interdisciplinary scientific programmes and a review of current global research.

His position as vice-president is a voluntary service to the ICSU, and he will continue to perform his duties as vice-chancellor of the UKZN. “It is all voluntary work, but I look forward to it because it is giving back to science what science has given to me,” he says.

Makgoba has already attended his first meeting of the ICSU and the General Assembly has identified two new global scientific research projects.

The “Health and Wellbeing in the Changing Environment” project will draw on the expertise of an interdisciplinary team of researchers to investigate the complex effects of urban and migratory patterns on human health and wellbeing.

The outcomes of this particular project will be of major importance for individuals, policy formation and governments worldwide, as it looks at the growing urbanisation trend in the world.

According to the UN, 50% of populations in developing countries will live in urban areas by 2020. Although Africa is predominantly rural, it is considered to be the continent with the fastest rate of urbanisation.

By 2030 both Asia and Africa will have higher numbers of urban residents than any other major area of the world.

UN figures quoted in a report of the Organisation for Economic Cooperation and Development (OECD) reveal that 70% of the world’s population will live in urban areas by 2050, with the percentage rising to 86 for people in OECD countries.

He says that urbanisation has far-reaching impacts on health, culture and how human beings define their identities.

“It is a highly relevant topic in a changing world environment and raises many questions about urban wellbeing and health. The study will investigate the challenges and find potential solutions for the urbanisation trend,” he says.

Another project on the agenda is the Earth Systems Sustainability Initiative, which will research the impact of global change on the earth, people and the capacity of the earth to sustain life on the planet.

“The main focus of this ongoing research is on the unprecedented human-induced global change and the threat to society and human wellbeing worldwide. Climate change and biodiversity loss are just two examples,” he said in a statement.

Makgoba has made other major contributions to the advancement of health and science in South Africa.

His research as a molecular immunologist has made it possible to identify and understand cell surface molecules and genes important in the human immune system’s response.

Makgoba, who is also a member of the National Planning Commission and special advisor to the minister of science and technology, has received numerous awards, including fellowships at both the Imperial College Faculty of Medicine and the Royal College of Physicians of London.

He is a founding member of the Academy of Science of South Africa and a foreign associate of the Institute of Medicine of the US Academies of Science.

In addition to various accolades for his work, Makgoba was the 2011 recipient of the National Research Foundation President’s Lifetime Achievement award.