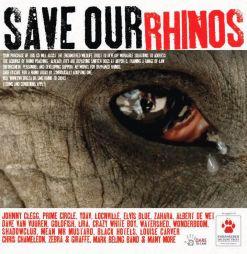 The Save Our Rhinos album is a joint
initiative of the Endangered Wildlife Trust
and Johannesburg-based Sting Music to
increase awareness about rhino
poaching while raising funds for
anti-poaching initiatives.
(Image: www.rhinocd.co.za)

Local musicians have added their voices to the fight against rhino poaching. A double CD compilation, featuring some of the country’s top musical talent, has been launched to help save South Africa’s rhinos from extinction.

With the help of the local music industry, the Save Our Rhinos CD is the latest initiative to up the ante in rhino conservation.

The project is a joint initiative of the Endangered Wildlife Trust (EWT) and Johannesburg-based Sting Music, and aims to increase awareness about rhino poaching while raising funds for anti-poaching initiatives.

The Save Our Rhinos compilation is available at selected music outlets or can be ordered online.

Every person who shows their support by buying a Save Our Rhinos album, which costs only R150 (US$20), is backing a worthy cause and as a bonus, will have the best of South African music at hand.

For every sale, 10% of the profits will be donated to the EWT’s efforts to find solutions to rhino poaching.

Various EWT anti-poaching initiatives – such as sniffer dogs deployed at airports, training of law enforcement personnel and the establishment of support networks for orphaned rhinos – are already underway across the country.

After years of hard work by conservationists to boost their numbers, South Africa’s rhino population could be extinct in less than a decade, unless more is done to protect them from poaching.

Last year 448 rhino were killed in the country, including 19 critically endangered black rhinos, of which fewer than 5 000 remain in the wild.

Recent statistics from South African National Parks (SANParks) indicate that 52 rhinos have been poached in South Africa so far this year – about one a day.

According to stoprhinopoaching.com, an independent web-based platform that raises awareness and support of rhino poaching, scientists predict that if the illegal activity continues at its current rate, South Africa’s rhino herd will go into population decline by mid-2012.

Towards the end of February justice minister Jeff Radebe announced that South Africa will deploy hundreds more soldiers to its borders in an effort to thwart international syndicates involved in rhino poaching.

The deployment includes army engineers to conduct repairs and maintenance on the 140km-long Zimbabwe-Mozambique border fence, a notorious escape route for criminals.

Troops were first deployed in April last year along the Mozambican border. Many of them were based in the Kruger National Park (KNP), which has become a popular destination for rhino poachers.

SANParks CEO David Mabunda said it is worrying that such a high numbers of rhino are still being killed in South Africa.

“The difficulty is pinning a suspected criminal to the actual crime, because we are dealing with very wily and sophisticated individuals,” Mabunda said.

He is, however, encouraged by the increasing number of arrests and harsher sentences imposed on convicted criminals who are part of international syndicates that smuggle horns to Asia.

Now poachers and horn smugglers can be sentenced to as much as 16 years in prison.

Conservation organisations and the police are also seeing more cooperation from the public, which has resulted in arrests in the KNP. Some criminals have even been arrested before entering national parks in the country.

According to the World Wide Fund for Nature – South Africa, the recent surge in rhino poaching is connected to the increased demand for rhino horn in Asia, particularly in Vietnam. Here the product is viewed as a luxury item and is mistakenly believed to be a cure for cancer.

However, traditional Chinese medicine experts have pointed out that rhino horn has no proven cancer-treating properties. Contrary to popular myth, it has also never been used in traditional medicine as an aphrodisiac.